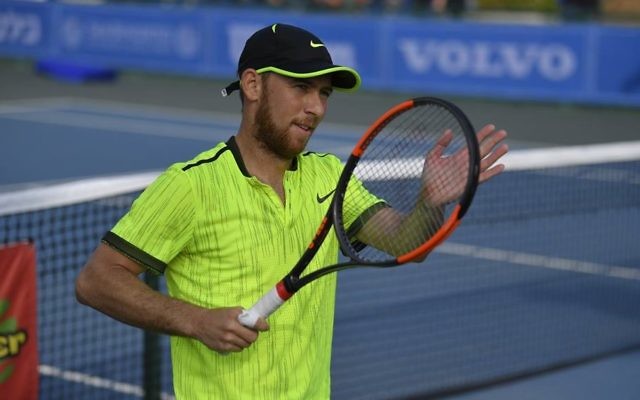 Dudi Sela will go into Monday’s Australian Open full of confidence after he won the Canberra Challenger on Saturday.

The world number 87 picked up his 21st Challenger title from 27 finals, which also saw him pocket $10,800. He said: “It’s always nice to win a tournament but I felt like he played much better than me today, in the important points I was a bit lucky.

“The experience of this stage, that I have been at so many times before, has taught me a lot, and also, to close out the match.

“He played very well but somehow every time it got to 30-30 I played a really good point, I’m happy I won but I think next time he will beat me.”

Also commenting on the support he received, he said: “There were a few Israeli’s here and it’s nice to see the flag of your country all the way over here in Australia. It gives you something, if they were not here I’m not sure I could have the motivation to come back and win like I did today.”

Sela will next face the world no.37, Marcel Granollers in the first round of the Australian Open, which begins on Monday. He said: “I’ve never played him before, but it’s a tough draw because he’s been top 20 in the world and number one in doubles, he’s a very good player. But I’ve never gone into the Australian Open having just won a tournament so this would have to be the most confident I’ve been going in.” Sela has reached the third round in Melbourne on the past two occasions and will be playing on MOnday, scheduled to be fourth on Court 12.

Sela will be the only singles Israeli player in action, after Julia Glushko lost her second qualifier on Friday, Amir Weintraub was beaten in the first round of men’s qualifiers.

Elsewhere in the draw, and playing on Monday,American Noah Rubin won his three qualifiers and will take on compatriot Bjorn Fratangelo. In an all-South American clash, Argentine Diego Schwartzman meets the number 22 seed, Uruguyan Pablo Cuevas.

In the women’s draw, Italian Camila Giorgi faces a tough task when she takes on the 12th seed, Timea Bacsinszky.

In the men’s doubles, Jonathan Erlich is teaming up with Jewish American Scott Lipsky, they take on Russian duo Karen Khachanov and Andrey Kuznetsov.