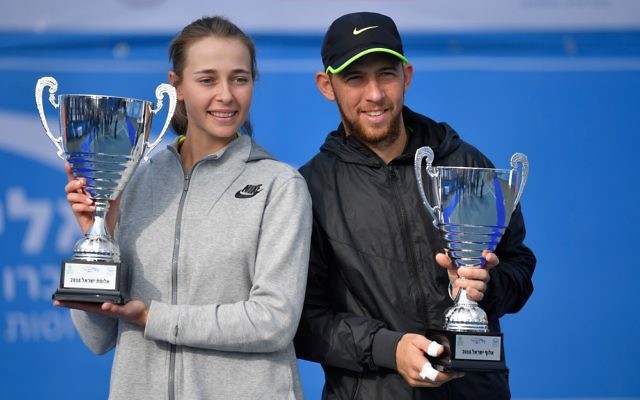 Dudi Sela and Deniz Khazaniuk ended 2016 on a high as they lifted the men and women’s titles at the Israeli tennis championships – but the future of one of Israel’s top ever tennis players was cast into doubt.

The annual event, held in Ra’anana, saw Sela claim a fourth consecutive win, but it was Khanzaniuk’s win, in the absence of Shahar Peer, which led to speculation the latter could soon be hanging up her racket for good.

Khanzaniuk was the number one seed in the draw, due to the absence of Peer and Julia Glushko, and it’s the continued absence of the former, who was ranked as high as 11 in the world just six years ago, which has led to suggestion that she could soon retire from the game.

Dropping down to 1,152 in the rankings having not played since February, Israel Tennis Association CEO Shlomo Glickstein said: “She hasn’t played tennis for 10 months. First it was an injury and after that it was other stuff. I’m in contact with her and her father and I think that deep inside she still thinks she will come back at some stage. That doesn’t seem realistic to me. She will surely find the proper way to say goodbye.”

Taking full advantage of the two senior female players, 22-year-old Khanzaniuk, who’s ranked 247 in the world rankings, beat Maya Tahan 6-1, 6-1 in the final. She said: “I’ve been practicing for years to win this title, this is a dream come true. I really wanted to win this title and I hope I can make it into the Australian Open qualifiers.”

Also hoping to get a recall to the Israeli Federation Cup team, having fallen out with both Peer and Glushko following an interview she gave four years ago, where she criticised them, she said: “It’s not my decision and it is difficult to forget what happened in the past,” she said. “I represent the country when I’m on tour, but doing so for the national team is different.”

In securing his seventh title, Sela is now just two short of equalling the record number of wins, jointly-held by Shlomo Glickstein and Yehoshua Shalem. Defeating first-time finalist Daniel Cukierman 6-3, 6-4, who had beaten Amir Weintraub in the semi-finals, Sela went through the tournament without losing a set, and the 31-year-old, who’s ranked 96 in the world, said: “I’m feeling good and I’m hoping I’ll have a good 2017 on the ATP Tour. I experienced a bit of a drop after the Olympic Games last summer and I’m hoping to return to the top 50 next year.”

Cukierman, 21, said: “As a child I watched Sela in Davis Cup matches and it was a dream for me to play him in the final.”