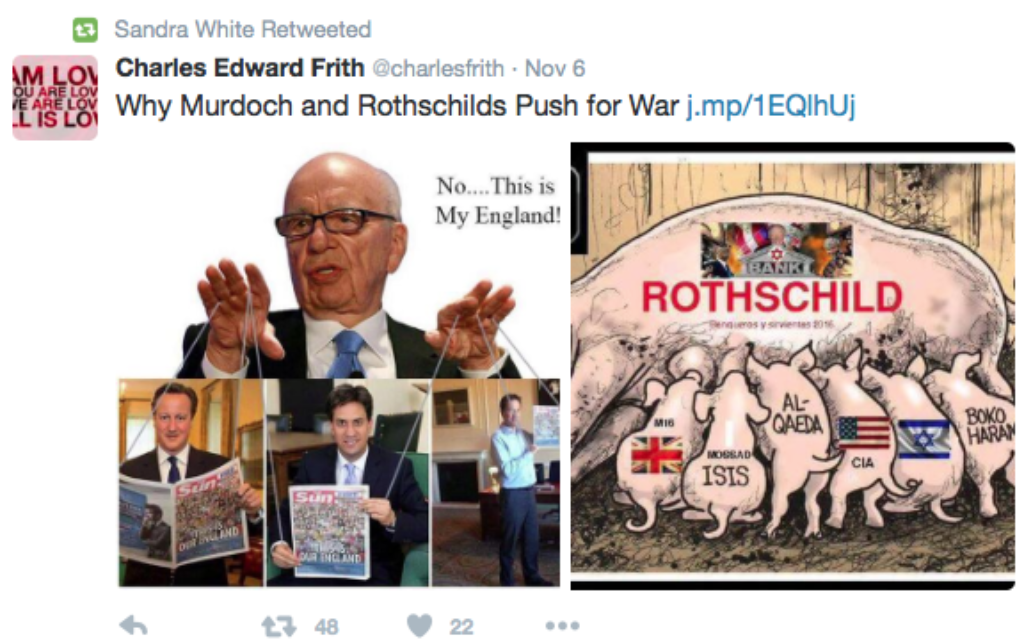 Scottish Jews have complained to the Scottish National Party (SNP) and its leader, over an anti-Semitic retweet sent by one of its politicians.

The Scottish Council of Jewish Communities (SCoJeC) showed concern over “a grotesque caricature based on traditional antisemitic stereotypes and neo-Nazi imagery”, endorsed by one of the SNP’s elected politicians, Sandra White.

SCoJeC wrote in a statement on their website: “We are utterly appalled that any MSP should have seen fit to disseminate such a bizarre and hateful image as the right-hand side of the picture, which, as we have pointed out to the First Minister, is reminiscent of the very worst of Nazi propaganda.”

It continues: “We have reminded the First Minister of her statement to the recent packed public meeting in the Glasgow Community, that “There is nothing that happens in Israel or Palestine that can be justification for antisemitism or any racial or religious hatred. That is a point that has to be made at every level of Scottish society very, very strongly”, and we have requested her to convey that message to Sandra White.”

White, a member of the Scottish Parliament for Glasgow Kelvin re-posted the image which depicts a large pig with the word ‘Rothschild’ across it. Above the word is a picture of a bank with a red star of David, whilst Piglets are shown suckling the larger pig.

Each piglet shown to represent an international actor, including one with a British flag and ‘MI6’,  ISIS, Al-Qaeda, the USA’s ‘CIA’, Israel’s, and Boko Haram.

After she retweeted the post, an SNP spokesperson responded to the Jewish News by saying “this tweet was re-tweeted in error and has been removed from Sandra White’s account. Sandra apologises for any offence caused.”

Sandra White has not yet directly responded to the incident.

A petition has also been set up calling for “Sandra White MSP to resign following her racist tweet.”