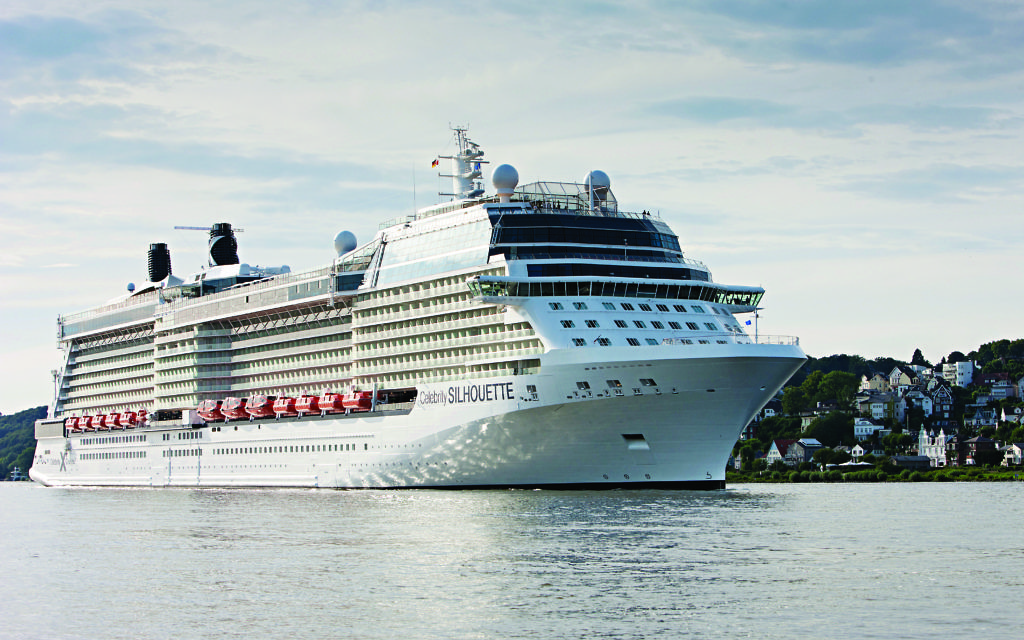 The largest cruise ship ever to be officially named in Hamburg arrives in the city today (19 July 2011) for the first time. The 2,880-guest Celebrity Silhouette will be named and launched by cruise line Celebrity Cruises on 21 July in Hamburg...

Louise Cahill sets sail on a 14-night cruise of the British Isles, taking in Jewish areas of interest

Louise at the Giant’s Causeway in Antrim

On a chilly Friday evening in Belfast, 1974, dinner was potatoes, cooked to a cinder on the fire and cheese slices. Our landlady had taken pity on my ex-husband and me, surprising us by lighting a fire in the lounge hearth.

It was during the Ulster Workers’ Council Strike, when services and utilities were restricted and intermittent. That summer we left Belfast for the UK.

Fast forward to summer 2015 and it was a different Friday night, this time aboard Celebrity Silhouette on a 14-night cruise of the British Isles. Belfast was one of our stops on a port-intensive itinerary leaving from Amsterdam, to include Le Havre, St Peter Port, Cobh, Dunmore East, Holyhead, Dublin, Greenock and Liverpool.

Guests congregated to enjoy the Kabbalat Shabbat. A lady wearing a black kippah from New York officiated with help from Ron, my partner. We passed round wine glasses of Manischewitz Concord Grape and tasty challah.

After declaring where we came from, we mingled before leaving to enjoy dinner in Blu, our designated, exclusive, Deck 5 restaurant, for those in AquaClass staterooms.

If you crave a luxurious, spacious, conveniently-situated, veranda stateroom with a rain shower, daily iced tea and canapés, as well as speedy access to the spa and Persian Garden’s heated loungers, then AquaClass certainly ticks the boxes.

Michaela, our maitre d’ at Blu, was patient about our dietary restrictions, including my lactose intolerance. Fish was plentiful and salmon was the default kosher species.

The Blu restaurant aboard the Celebrity Silhouette, where fish was plentiful and service was wonderful

I was surprised with chef-made, dairy-free chocolates, wrapped in a silver foil swan, to take back to my stateroom, where steward Adam also spoiled me with nightly Valrhona Guanaja chocolates.

Captain Alevropoulos also delighted us with an excellent passage. The thread of forced emigration and departure filtered through our 2,068 nautical miles.

At White Rock, St Peter Port, Guernsey, we read the Jewish Women’s Memorial to Marianne Grunfeld, Auguste Spitz, and Therese Steiner, deported to France in 1942, then to Auschwitz-Birkenau, where they died.

There were sad stories, too, at Cobh, RMS Titanic’s last port of call. After RMS Lusitania, heading for Liverpool, was torpedoed nearby in 1915; those who survived and those who hadn’t were taken to Cobh.

We discovered documentation in a glass display case about several Jewish people who died in the disaster. Prominent in town is the Lusitania Peace Memorial. From Ireland, we sailed the Irish Sea to Holyhead in five-star luxury, a welcome contrast to previous journeys by choppy ferry.

I recommend the excursion from Holyhead to Llandudno, a popular seaside town in Wales – and also the place from where my mother hailed. During the war, her parents, Sarah and Hyman Meyers, owned the kosher Marieville Court, a hotel on Church Walks, opposite the building to be used by the Llandudno Hebrew Congregation.

Disembarking Silhouette, we stretched sea legs with a half-hour walk to 106 acre, coastal Breakwater Country Park with its open-air art gallery. Warden Will Stewart walked us by the heather and told us about P Pollecoff’s Holyhead store, now converted.

The Pollecoffs owned five shops in North Wales. Back onboard, it was one of three formal nights. In Silhouette’s theatre, we enjoyed Velocity, a powerful show featuring song, dance, and spinning, swinging acrobats. It wasn’t our sole theatre.

From Greenock, where there was a Jewish community until 1936 (Scottish Jewish Archives Centre), Ron and I took the ‘Edinburgh on your own’ excursion. We arrived in the thick of the Edinburgh Festival Fringe.

The Royal Mile was buzzy with street theatre, including the pierced lady, a knife juggler, magician, and enthusiasts handing out flyers. Attracted by a top-hatted guy advertising What The Dickens by the Cambridge Impronauts, we succumbed.

When David Grantham, our informative guide, opened the entrance doors to the synagogue, which was consecrated in 1874, our group was dazzled by its sumptuousness and eclectic nature. Architects William and George Audsley travelled and gleaned ideas, resulting in decorative styles from east and west. Eyes were drawn to the wonderful Ark, and stained-glass rose window.

We marvelled at the marble, and octagonal, green columns decorated with red and gold leaf. Highlights were royal blue domes with golden stars. David stood by a cornucopia of religious items. He read the prayer for the Royal Family, proudly raised the Sefer Torah, showed a ketubah, blew the shofar, and explained all.

We smiled as our taxi arrived, bearing a registration ending in JNF, to return us to Silhouette, for two sea days to Amsterdam, including another Kabbalat Shabbat. At brunch on the final day at sea, chefs showed off their skills, and the chandeliered Grand Cuvée dining room sparkled.

After overindulging on assorted smoked fishes, I met pastry chef Joseph, who promised me chocolate fondue that evening. (Tip – befriend the pastry chef when you step onboard!).

There is no better way to explore our beautiful and history-rich British Isles than on the stunning and sparkling Celebrity Silhouette.

Louise flew from London to Amsterdam with KLM www.klm.com

Celebrity Silhouette from Celebrity Cruises offers a 12-night British Isles and The Open fly/cruise from £2,019 pp (based on two people sharing an interior stateroom) for 13 July, 2016 departure.