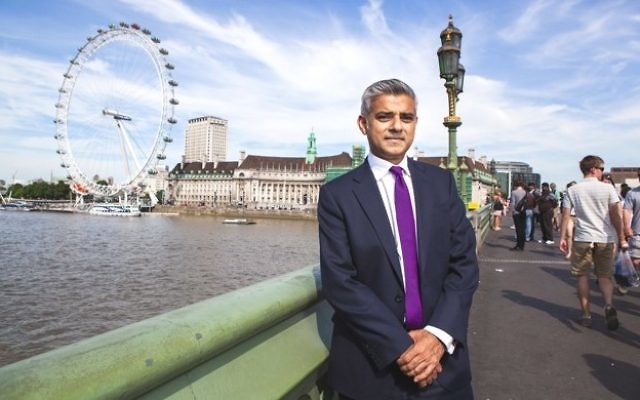 As someone aspiring to be a unifying Mayor of such a fantastically diverse city I want to reach out for support from every community, not win by divide and rule. Because I know what its like to be a member of a minority group in London. And I know what it’s like to be discriminated against. That’s why I’ll never stop fighting racism in all its forms, including anti-Semitism.

The increase in anti-Semitic attacks in London is a badge of shame. I know this is striking fear into the hearts of Jewish Londoners. As Communities Minister I worked to tackle anti-Semitism, including working with Lord Parry and the Coexistence Trust to promote understanding between young Jewish and Muslim Londoners and supporting the important work of the APPG on anti-Semitism. I’m determined I will do so again as your Mayor.

It’s a source of pride that communities that are often in conflict in other parts of the world live side by side in peace in London. I want my election as Mayor to represent that harmony – a Mayor who is Muslim fighting for the interests of a large Jewish community and all minority communities in London. We can build stronger understanding, trust and partnership by focusing on our common interests.

But it’s a matter of real regret to me that twice in recent years – in the London Mayoral election and the General Election – London’s Jewish Community has shown its dissatisfaction with the Labour Party. In the General Election I ran Labour’s campaign in London. We gained seven marginal seats but despite excellent candidates and campaigns the glaring exceptions to those gains were in areas with significant Jewish communities: Finchley & Golders Green, Harrow East and Hendon.

I want to be clear – a strained relationship with one of London’s most important minority communities is unacceptable. I’m determined I won’t repeat this. I would be a Mayor for all Londoners.

So I want to make three pledges to you about how I would act as Mayor:

1) I’ll make combating anti-Semitism and providing the Jewish community with the resources it needs to be safe a top policing priority. I will call out anti-Semitism wherever it arises. Nothing excuses this ignorant and shameful hatred. As a Muslim I’ve been subjected to Islamophobic abuse so I stand in solidarity with the Jewish community when they similarly suffer.

2) I’ll remain resolutely focused on the crucial job of bringing improved services and strong city leadership to London. I won’t be distracted into using the Mayoralty to offer commentary on foreign policy issues. I’ll speak out when I have strong views but always be particularly conscious of the need to be a voice for peace and coexistence around the world.

3) I will work with all Jewish organisations and charities to bring our communities together and promote understanding. Like 3FF, a mentoring scheme which I have supported in Parliament, and the brilliant Mitzvah Day initiative. Laura Marks and Daniela Pears have bought people from all backgrounds together to celebrate a Jewish day of social action – showcasing London at its best.

There’s so much else besides these issues that Jewish Londoners need from a Mayor. Support for Jewish schools and social care, action on affordable housing, particularly for the Charedi community, better transport links and neighbourhood policing and absolute support for cultural and religious freedom regarding Shechita and Brit Milah.

That’s why, as a Muslim Londoner, I want to be the best Mayor that Jewish Londoners have ever had – the strongest possible champion of your community. I don’t expect Jewish Londoners to rush to re-embrace Labour – trust has to be won back once it is lost. But I hope you’ll begin a dialogue with me about the kind of London we all hope to build.