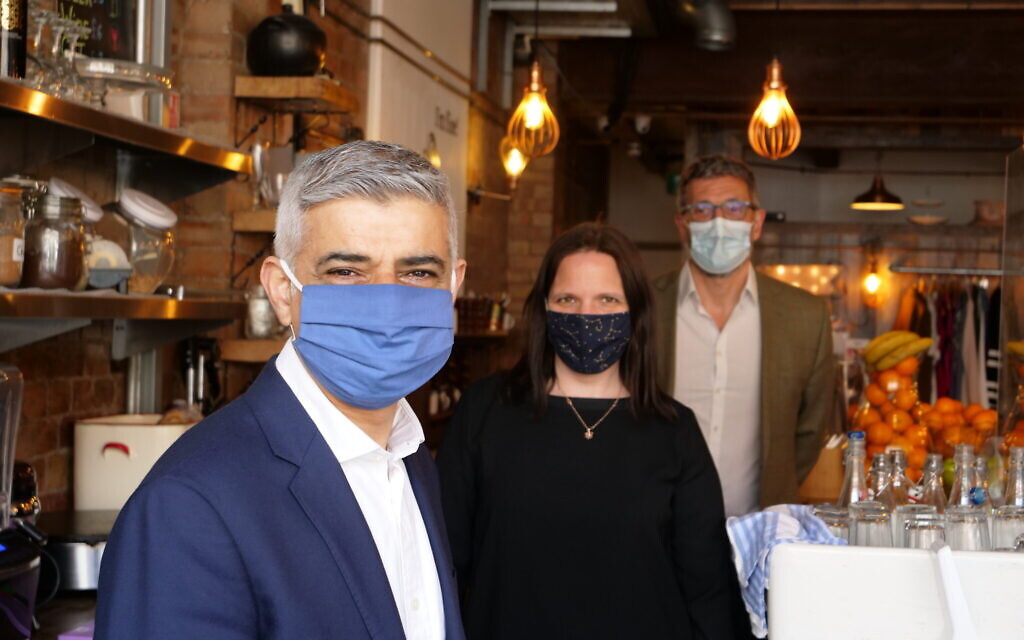 Sadiq Khan has revealed he regularly turned to advice from Israel over the past few months on how to encourage Londoners to overcome concerns about having the Covid-19 vaccine.

Touring the streets of Golders Green as he campaigned for a second term in office as London Mayor, Khan heaped praise on his counterpart in Tel Aviv, Ron Huldai and revealed they had spoken “quite a lot” during the pandemic.

“What Israel did with what is called vaccine hesitancy – they were light years ahead,” he told Jewish News.

“We were speaking to them regularly on how you bust the myths. What Israel recognised was that you have got to educate people.

“They explained very well and normalised and educated and explained if you want to get back to reality vaccines are the way out.

“Initiatives like the gym for a jab scheme where you got to go to the gym if you had the vaccine, that was such a clever way to deal with those who were hesitant to get vaccinated.”

With such close working relations with Israel, Khan was questioned on why he had not yet kept a promise made to Jewish News in 2018 that he was ready to visit the country with a delegation “soon.” 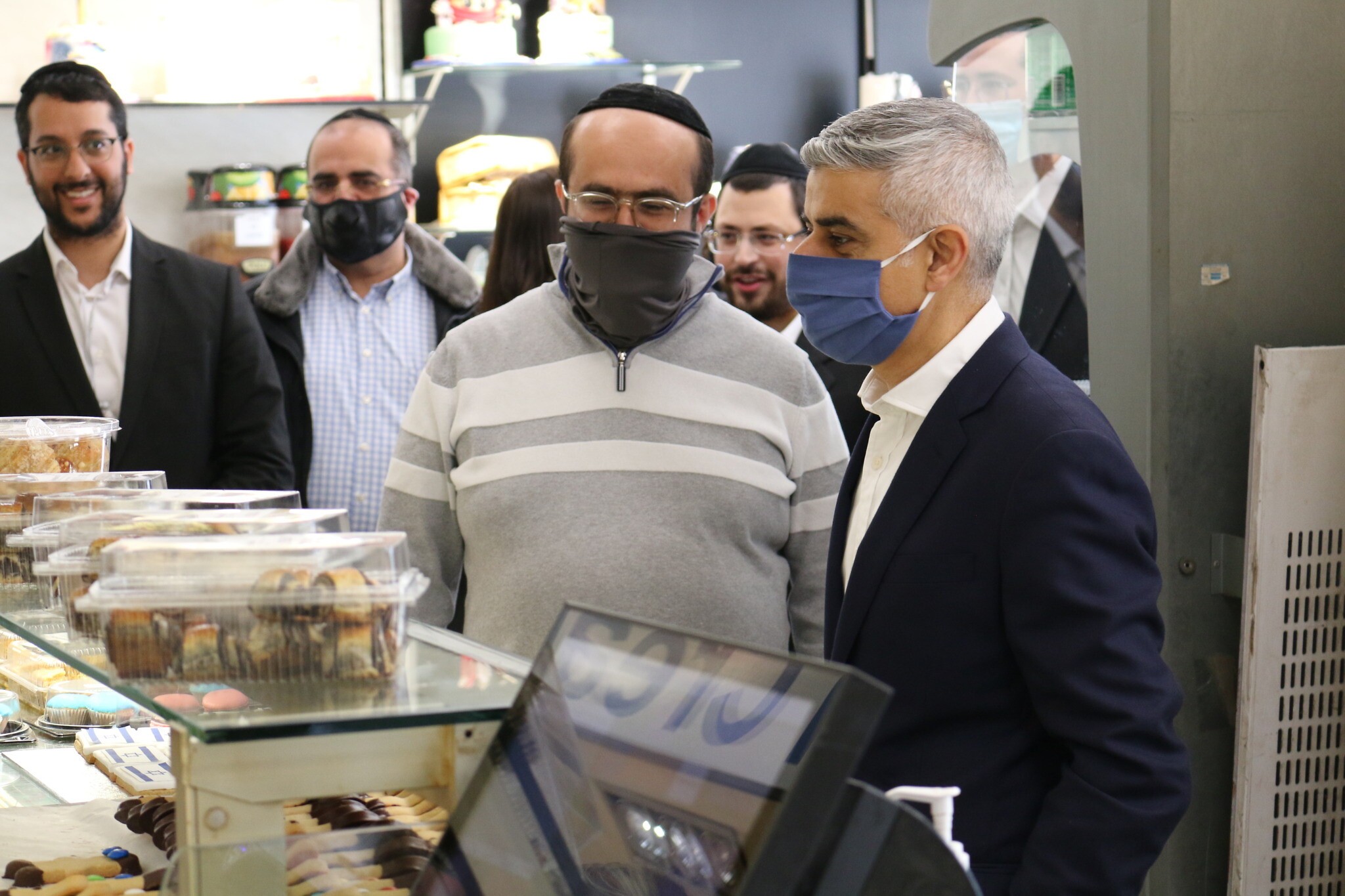 Asked if could definitely pledge to visit Israel if elected for a second term on May 6, he said: “I can, absolutely.”

He added:”If I am re-elected I intend to go to Israel. There is a lot of work we are already doing in fintech, with innovation.

“Whenever I speak with the Mayor of Tel Aviv I am very excited about the work that is taking place there.

If I am re-elected I intend to go to Israel. There is a lot of work we are already doing in fintech, with innovation

“There is an obvious partnership,  I want to see us building on that. In term two, I will bang the drum for London in Israel.”

Khan accepted that some voters amongst the capital’s Jewish community could still not bring themselves to accept that his party Labour were doing enough to tackle antisemitism, even under Keir Starmer’s leadership.

He said it was to Starmer’s “credit” that he had implemented the recommendations of the Equality and Human Rights Commission report into his party “in full and straight away” and that he had suspended Jeremy Corbyn over his refusal to apologise for his criticism of the watchdog’s assessment of his handling of antisemitism.

Khan then called for Labour to “redouble our efforts to try to persuade” the likes of former MP Luciana Berger that “we have changed.” 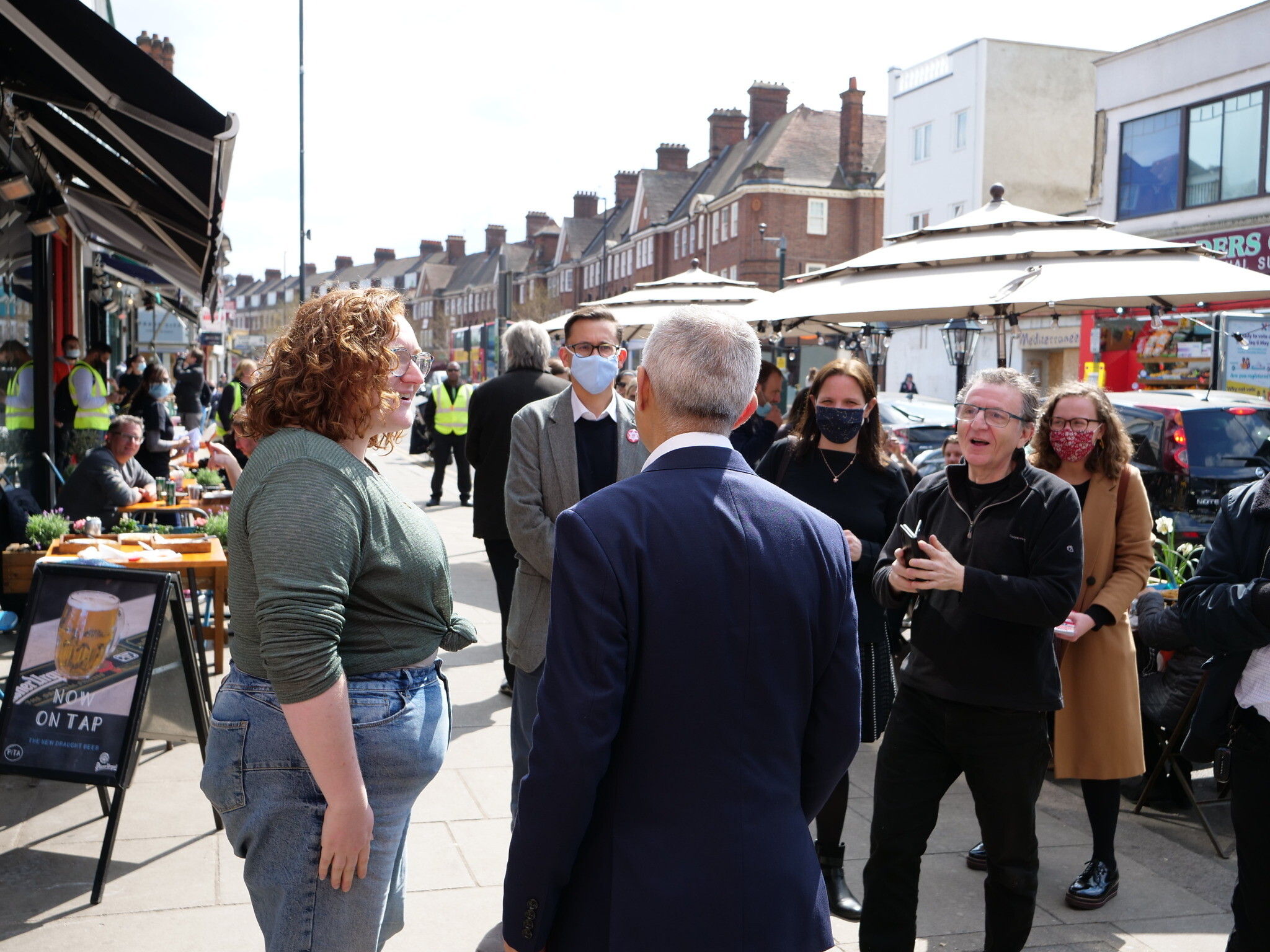 Meeting locals in Golders Green, Sadiq Khan was greeted enthusiastically by many people

He said:”I think people such as Luciana, and Louise Ellman,  still needed to be persuaded.

“It is really important that we redouble our efforts to persuade them the party has changed under Keir.”

Khan said he was fighting the election on a manifesto that promised to protect those who have lost jobs in the pandemic.

He also said Covid had illustrated the inequalities that continued to exist in London across every community.

Pointing to the “good example” of the Stamford Hill Charedi community he said: “What Stamford Hill showed was that families living in multi-generational households, through no fault of them own – they were passing the virus on.

“It is important to understand the consequences of over- crowding and to support the communities.

“One of the ways is through homes that adults and children can move in to, which are affordable.

“In Stamford Hill , for example, we were seeing three generations in one household.

“For some that is fine, but some do it because they have no choice to do so. That’s why it is really important to support those families.”

Venturing into familiar Golders Green establishments such as Carmelis Bakery,  the Head Room Cafe, and the restaurant Pita, Khan was greeted enthusiastically by nearly all. 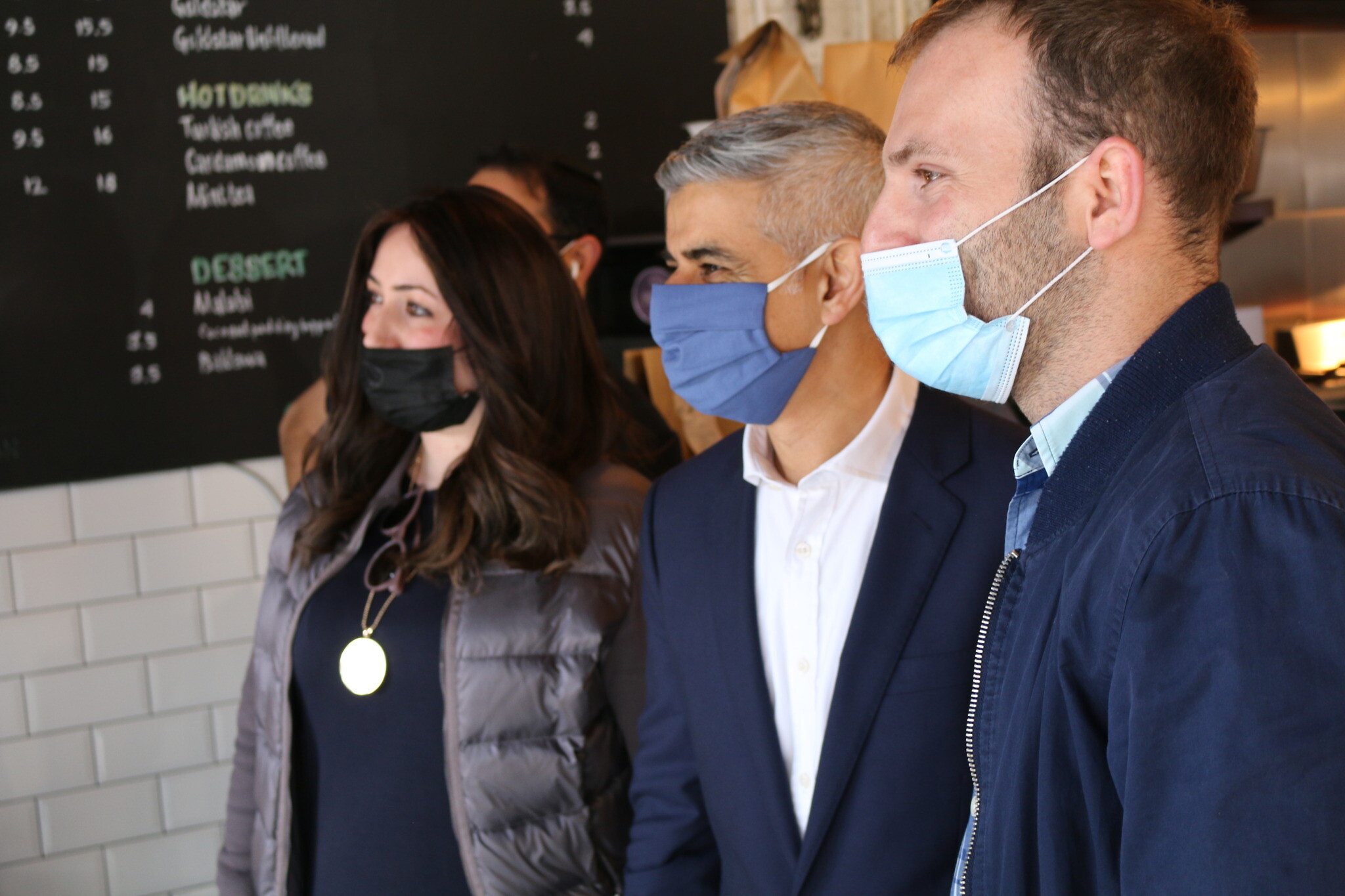 Outside Pita he told two people he was in favour of vaccine passports to gain entry to shops and venues, but only if they did not place “an additional burden on small businesses.”

He added:”I think more work needs to be done on them.”

Only one man on the street sought to criticise him over claims he had left a hole in the finances of Transport for London, a claim made recently by Prime Minister Boris Johnson.

Khan sought to counter the attack, explaining the impact of the pandemic on travel, and the government’s offer of a loan.

Khan told Jewish News he wanted to be seen as a mayor who would like after the interests of all Londoners and who recognised the contribution made to it by the Jewish community. 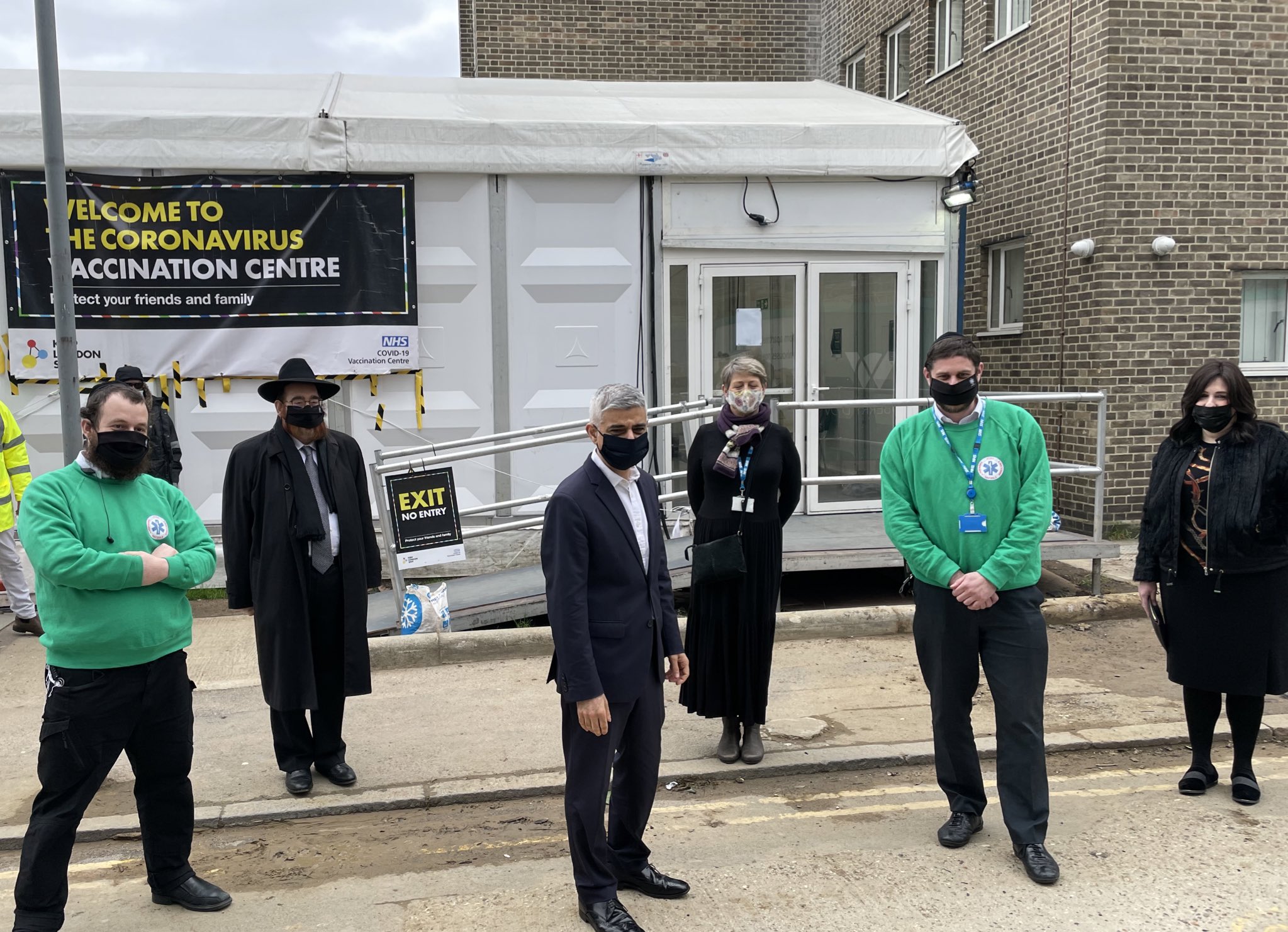 “One of the reasons why we are one of the greatest cities in the world is because of the contribution made by Jewish Londoners – economically, socially and culturally,” he said.

Khan refused to criticise his rival Tory candidate Shaun Bailey’s attempts to win over the community, saying he believed all politicians should attempt to reach out to them.

But he said he hoped recognition would be there for his work with the Jewish community over the past five years.

He said he received advice on the both the “successes” and the “challenges” faced by the community from the “many” Jewish faces in his team.