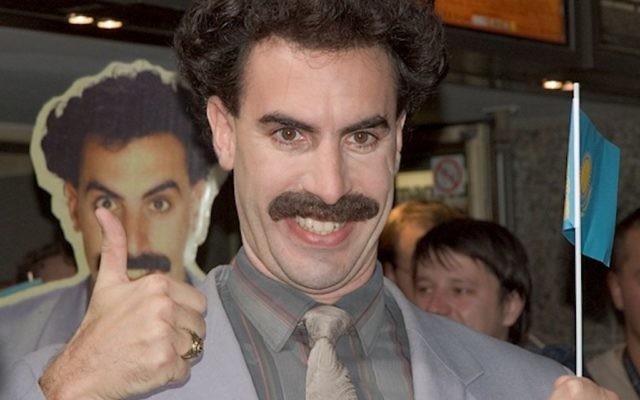 Sacha Baron Cohen has launched legal action against a US cannabis dispensary allegedly using his comedy character Borat on a billboard, arguing he has never used the drug as it is an “unhealthy choice”.

A picture of the offending billboard features Baron Cohen as Borat giving a thumbs up alongside the words, “it’s nice!”.

The advert is placed on a busy interstate highway in Massachusetts to sell Solar Therapeutics’s cannabis products, according to the lawsuit.

However, the use of Borat – a fictional bumbling Kazakh journalist who featured in two hugely popular films – is unauthorised, the filing states.

Baron Cohen, 49, has never used cannabis and would not advertise the drug for any amount of money, the lawsuit says.

It states he does not believe the drug is a “healthy choice” and his Ali G character – a white, suburban wannabe rapper – was a “mockery of ‘stoner’ culture”.

And Baron Cohen, described in the lawsuit as an observant Jew, does not want to enter the “heated” debate surrounding the drug’s use in Judaism.

The actor, writer and director has never advertised any product in the UK or US “despite countless opportunities to do so” over fears it would “weaken his credibility as an actor and as a serious social activist”.

Baron Cohen, a three-time Oscar nominee, turned down a 4 million dollar (£2.9 million) offer to appear in a car commercial, according to the lawsuit.

And it notes cannabis remains illegal in many US states.

Baron Cohen’s lawyer alleges Solar Therapeutics did not believe he would see the offending billboard “so they took a gamble” in putting Borat’s likeness on it.

Baron Cohen is seeking damages of at least 9 million dollars (£6.5 million) and has asked a judge to order Solar Therapeutics to stop using his likeness.

The company is yet to respond.

The ex-New York City mayor was filmed with his hand down his trousers while in a hotel room with actress Maria Bakalova, who was disguised as a reporter.