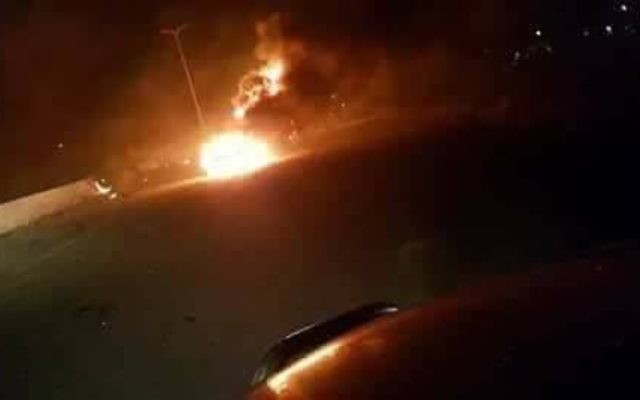 Screenshot of a video showing reported Israeli strikes against sites in Syria in May 2018.

Russia has once again accused Israeli jets of using one of its planes to “shield” them from Syrian anti-aircraft missiles during a bombing raid on Thursday.

In a sign of increasing tension between the two regional Moscow and Jerusalem, the Kremlin said the Israeli Air Force had put a Russian passenger plane carrying 172 passengers at risk, adding that this latest near-miss was part of a pattern of behaviour.

Russian Defence Ministry spokesman Igor Konashenkov said Israel was “using the presence of civilian airliners as a shield against Syrian anti-aircraft fire” during raids, making “a total mockery of the lives of hundreds of innocent civilians”.

The plane was reportedly trying to land in Damascus when the Israeli jets allegedly used it as cover during airstrikes over Syria. The Russian military said the Airbus A320 was forced to land instead at the Khmeimim air base in north-west Syria.

In response to the downing of that plane, Russia provided Syria with its advanced S-300 long-range surface-to-air missile defence system, pointedly declaring that the move was “designed to cool off hot heads”.

By February last year Israeli satellite imaging suggested that the system was “probably operational”. Israel has threatened to destroy the S-300 system if it is used against its aircraft, even though this would risk Russia’s wrath.