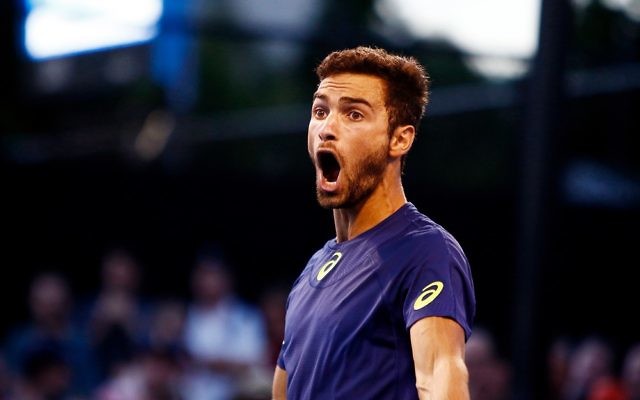 Noah Rubin will face the toughest match of his career to date on Wednesday morning, when he takes on Roger Federer in the second round of the Australian Open.

The 20-year-old booked his place in round two – for the second consecutive year – by beating compatriot Bjorn Fratangelo 7-5, 3-6, 6-2, 6-2, though is now facing up to taking on the 17-time Grand Slam winner, in what will be the third scheduled match at the Rod Laver Arena.

The task ahead of Rubin is illustrated by the fact that Federer has never failed to reach the third round of the tournament – and hasn’t lost in the second round at a major since losing to Sergiy Stakhovsky at Wimbledon in 2013.

Ranked 200 in the world, the 2014 Wimbledon junior winner, won three qualifying matches to get into the main round of the draw in Melbourne, with this being his third Grand Slam appearance of his career, following last year’s tournament and the 2014 US Open. Speaking to the New York Post about the match, he said: “I’m playing a legend of the sport, sadly we don’t know how many years he has left playing, so I am extremely excited for this opportunity to get to compete with him.”

When asked what he knew about Rubin, following his first round win over Jurgen Melzer, the 35-year-old Swiss star said: “Almost nothing, did he play here last year? I saw a little bit [of his first match] while I was waiting for my match on the mini screen, how much do you see? You see a little bit, but you don’t see the ball.

“I know he’s a baseliner. He makes a lot of shots. I guess it’s not a bad thing for me. I know it’s probably more on my racket rather than playing a big server. Regardless, you know, got to manage any kind of player in this draw to move forward.”

Elsewhere in Melbourne, Camila Giorgi’s campaign was ended on Tuesday morning, when she was beaten 6-4, 3-6, 7-5 by Switzerland’s Timea Bacsinszky.

Looking ahead to Wednesday’s action, in addition to Rubin’s clash with Federer, Dudi Sela will be looking to book his place in the third round when he takes on Slovakian Lukas Lacko, which is due to be the second match on Court 12, while Argentine Diego Schwartzman takes on Belgian Steve Darcis, third on Court 20