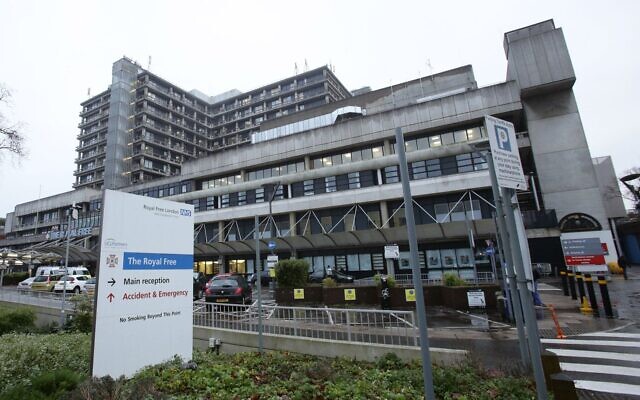 An allegation that a staff member at the Royal Free Hospital made a cut-throat death-threat gesture to a Jewish patient has been found to be false after an investigation was carried out, it has been confirmed.

The director of communications at the north London NHS hospital confirmed on Wednesday that following a “thorough” probe into last week’s allegation the claim was found to be “fictitious and has subsequently been withdrawn.”

It had been alleged that a patient attended the hospital for a blood test last month when she allegedly noticed the health professional wearing a Palestine flag on their jacket and a badge which said: ‘Stop killing our children.’

But then while walking away the staff member was said to have “swiped her finger across her throat.”

But in a statement on Wednesday the Royal Free’s director of communications Ian Lloyd confirmed: “Following a thorough investigation, I can confirm that the allegation was fictitious and has subsequently been withdrawn.

“As I am sure you will appreciate this has been an upsetting episode for many people connected with the Royal Free London – and in particular our colleagues in the phlebotomy service. We will be ensuring they are updated and supported.

“We are pleased this matter is now closed and on behalf of the board I would like to restate how proud we are to serve such a richly diverse community which is reflected across our talented, committed and caring staff.”

A description of the alleged incident was widely shared across the social media including on the London Jewish Community group set up in the midst of heightened tensions in the UK over the conflict between Israel and the Palestinians.

Hard-line social media activists from within the community also circulated the claims on Twitter.

Jewish News carried a report confirming the incident was being investigated.

In response to widespread concern about the claims the Royal Free issued a statement last week saying they were taking reports of the incident “extremely seriously” but that it had not received a formal complaint.

“We do not tolerate racist or antisemitic behaviour of any kind, from anybody on our premises,” said a spokeswoman for the Trust.

It is understood that senior officials from the Royal Free also met with the Community Security Trust last week to discuss the claims and provide reassurance they were conducting a full investigation.