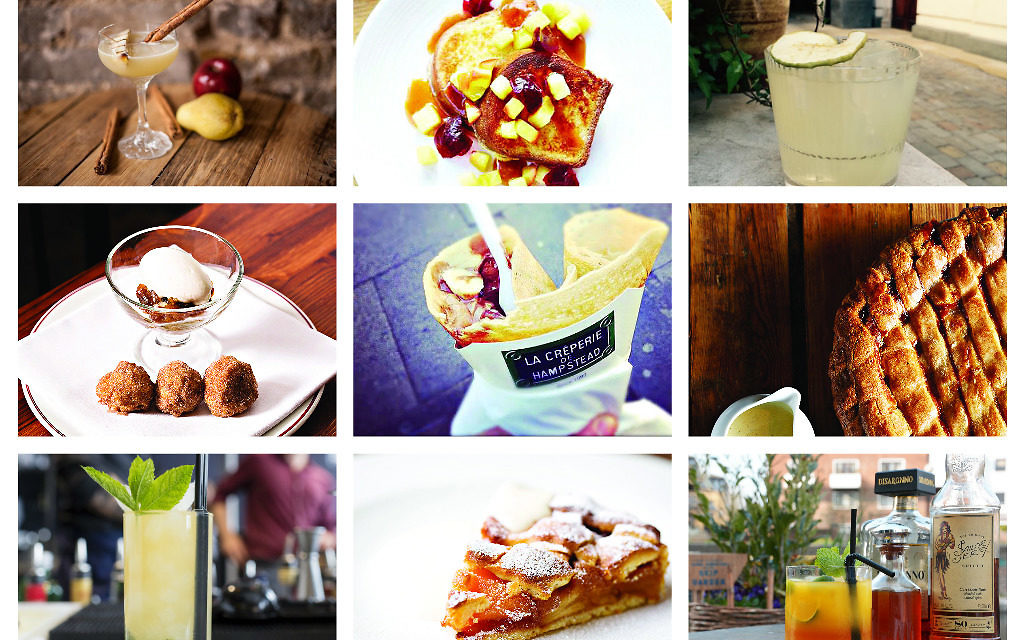 As the signature fruit of the festival, apples are hard to escape at this time of year. But why would you want to? Angelica Malin embraced the Malus sylvestris and found the best places to enjoy it outside your own kitchen….

Angela Hartnett recently opened the second Café Murano in Covent Garden, which takes a simple and seasonal approach to Italian cooking of the kind that made the original in St James’ a critical hit and local favourite.

The menu has been developed by new head chef, Richard Lloyd in collaboration with Angela, and is inspired by recent travels around the regions of Italy.

The café’s Italian baked apple crostana (£6) is the result of those trips and is absolutely delicious. A brilliant pudding for those of us still chasing our five a day (ahem) using fat slices of Bramley apples, a crispy pastry, it is served with cream and a generous dusting of icing sugar.

Situated in the heart of Notting Hill, just off Portobello, West Thirty Six is an all-day townhouse serving brunch, lunch, dinner and cocktails.

The unconventional restaurant, bar and cocktail lounge benefits from four enviable outside terraces, perfect for catching the last summer rays. The restaurant’s menu comes from chef John Pollard, formally of Soho House, and focuses on local produce that is cured, smoked and grilled on site.

Within each floor, there is a room and space offering something different, secret and surprising. The apple cinnamon pie with custard (£9) is fantastic – the huge pie dish is brought to the table piping hot and diners are served their piece individually.

Apple Beignets at The Richmond, Hackney

Apple Beignets at The Richmond, Hackney

The restaurant was the lovechild of Brett Redman, an Australian chef and restaurateur, and Margaret Crow, a prominent fashion stylist. The pub has been transformed with modern interiors, a glass-topped bar and amber lighting to give it a warm, homey feel.

The food focuses on comfort dishes, and raw ceviche, such as tuna tartare with aubergine, harissa and mint. Don’t leave without trying their amazing apple beignets with ricotta sorbet (£7) which is world-class.

This charming neighbourhood restaurant in Battersea, just by the Thames, has a wraparound terrace overlooking the river and great views. If it’s nice weather, bask in the sunshine while sipping a flat white, and if it’s not, hide inside with some of the best brunch plates in town.

Husband and wife team Johan and Elsa De Jager opened SOURCE in Battersea at the end of 2013; and the name is inspired by London’s only natural spring, located directly under the restaurant, which allows them to filter their own natural spring water.

The menu aims to showcase the best of British ingredients and adapts seasonally, featuring only top quality produce from handpicked suppliers. Their brioche French toast with apple, hibiscus and smoked toffee (£10) for brunch is totally dreamy.

The best crêpes in London come out of a van. The same does not apply to men. This is a London institution for the pancake-loving crowd; the crêperie, open since 1980, always has a queue, and rightly so.

The secret is in the salty butter on the outside; a little hint of savoury on the oh-so-sweet inside.

The stand is open until 11pm – come here for the compote de pommes – fresh crepe with honey-apple compote and a dash of cream (£4); it’s the absolute perfect post-dinner treat in Hampstead.

And now for some drinks…

The cocktail to drink is their English Mojito (£7.50) with rum, strawberry, apple, mint and sugar. Come here for brunch – the smoked salmon and cream cheese bagel is perfect – and for dinner, expect great small plates and sharing platters, inspired by the European travels of Sir James Pennethorne, a 19th century architect.

This is quite the gem; a grand brasserie which serves up seasonal, locally sourced British cuisine, it’s absolutely amazing for weekend feasting. Rosewood has recently launched a weekly Slow Food & Living Market in the hotel’s grand inner courtyard.

The weekly market, open every Sunday, is endorsed by Slow Food UK. Come and try their new cocktail – the Big Apple (£11) includes smoked vodka, fresh lemon juice, Monin Orgeat syrup and apple juice, and is garnished with an apple crisp.

Bouche is a Parsons Green hotspot known for great champagne at great value prices for London. The food is great, too – prepared in Claude’s Kitchen.

The cocktail to go for is the cinnamon, sour apple and sweet pear crush (£10), which is made with Chase vodka, ginger syrup and sweet and sour fruit purees. The cocktail is, apparently, super healthy – full of fruit and the cinnamon is excellent for balancing out blood sugar. Drink up.

Rotunda in King’s Cross is a laid-back bar with classic British menu, plus it has a great terrace with deckchairs. Try the Bee-Low Deck (£7.95) with Amaretto, Sailor Jerry spiced rum, orange juice, honey and lime juice.

It tastes delicious, and what’s more, £1 of each drink is donated to The Honey Club, a social initiative working to create a bee caring community in the King’s Cross area. Rotunda is great for a light lunch or to spend an evening relaxing.

Inspired by the changing of the seasons, Michelin-starred Fera at Claridge’s is a creative take on modern British cuisine. Chef Simon Rogan’s high-end eatery offers elaborate tasting menus in an art deco space.

Their seasonal cocktails are works of art – try the mix of apple marigold, cider honey and sparkling wine (£15) – it’s fruity, fresh and utterly divine. You also have to try the desserts – the Bramley apple cake with cinnamon ice cream and pecan knocks your average kosher honey cake out the park.