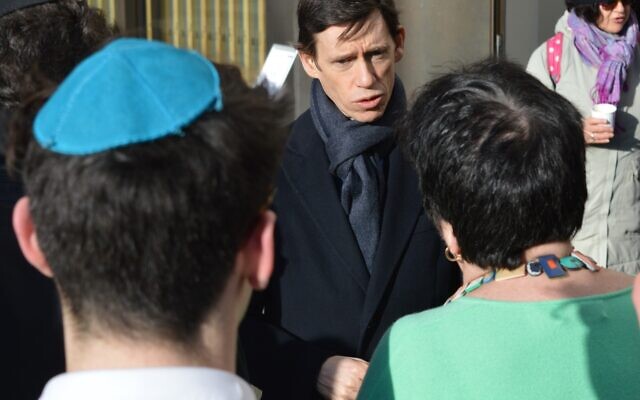 Rory Stewart speaking at JW3, after moving the conversation outside

A communal group has wished Rory Stewart well as he bowed out of next year’s mayoral race.

The former Conservative MP and leadership contender ended his bid to challenge Sadiq Khan next year, saying the impact of Covid-19 had made it difficult to keep his independent campaign going for another 12 months.

The mayoral election, which was due to take place this year, has been delayed due to the impact of the coronavirus restrictions.

Stewart, whose New York-raised wife Shoshana is Jewish, made his final campaign event a meeting at JW3 in early March.

He however refused to spend more than 10 minutes in an indoor meeting room — and asked those who wanted to continue the conversation to move outside, citing concerns over the virus.

In October of 2019, shortly after announcing his bid to run for the mayoralty, he toured the Jewish community, including Golders Green, pledging to learn yiddish and spoke about his fascinating Jewish family history. He also spoke at World Jewish Relief’s gala in February.

Claudia Mendoza, Director of Policy and Public Affairs at the JLC: “Throughout his time as an MP, Cabinet Minister and later candidate for Mayor of London, we have enjoyed a positive relationship with Rory Stewart.

He showed great interest in learning about the Jewish community and made time to talk to and visit many of our member organisations. We wish him and Shoshana well for the future.”