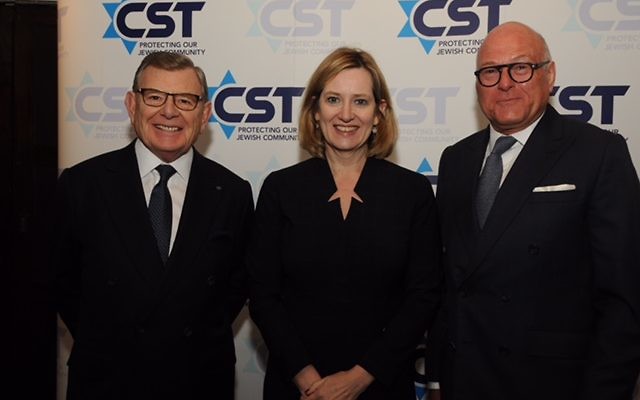 The chairman of the Community Security Trust has delivered a devastating assessment of Jeremy Corbyn’s approach to anti-Semitic anti-Zionism – suggesting he is more likely to “join in” than oppose it.

Gerald Ronson’s comments in front of an audience including deputy leader Tom Watson and new Met Commissioner Cressida Dick are perhaps the strongest condemnation yet from a senior community leader in such a forum.

He told the CST annual dinner: “I don’t doubt that the Labour leader opposes anti-Semitism when it comes from Nazis but when it comes dressed up as anti-Zionism he is more likely to ask if he can join in. This is far more subversive than the danger posed by Nazis.”

He earlier insisted that fighting anti-Semitism must never be a party political issue – stressing that the community has many friends in the party and inviting applause for Labour MPs standing up on the issue.

He added: “We have many good Muslim friends here this evening, but I just wish we had many more. The more Muslim friends we have, the better off both communities will be. We’ll need it because in the future we expect more anti-Semitism, more terrorism and more division.”

He also warned that global destabilisation and anger won’t be good for the Jewish community.

“Look at how fragile Europe is; and suddenly nobody knows what America stands for any more,” he said. “People are moving to the extremes. They face globalised problems, which they want simple solutions to. I don’t need explanations of fancy modern phrases such as “populism” or “false news” or “post truth”, because I know the danger they point to.

“Rightly or wrongly, people are angry. They don’t only feel left behind, they feel betrayed. And they need someone to blame. None of this is going to be good for Jews.”

Delivering the appeal speech, Ronson said he took his role even more seriously than any of his businesses. He detailed the CST’s recent work including setting up a nationwide control centre covering 220 sites and providing bullet proof vests to every shul.

The event saw Amber Rudd confirm £13.4m of funding to help cover the costs of security guards at Jewish institutions.