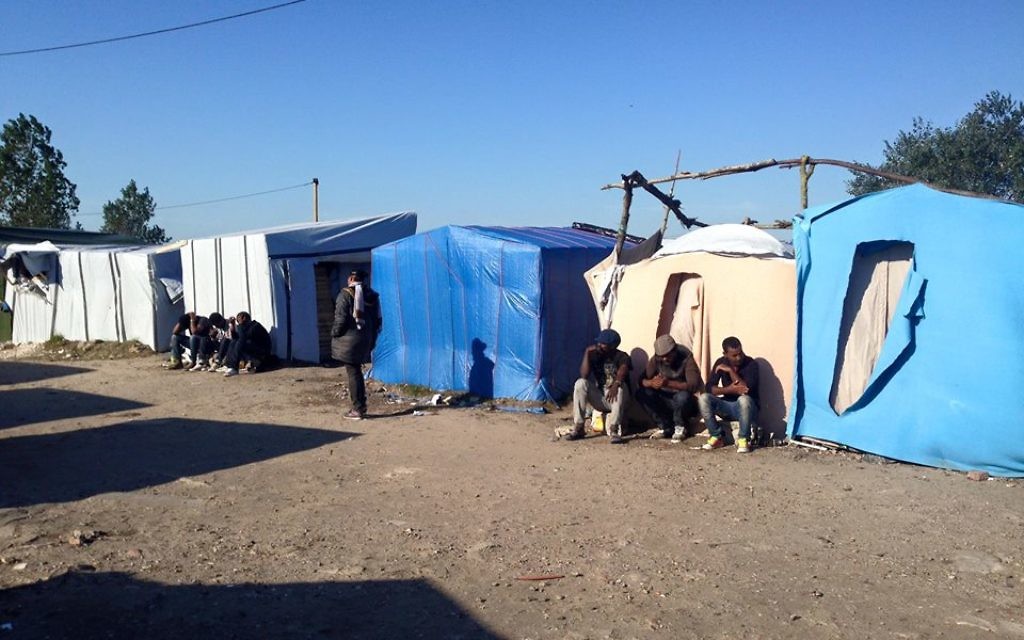 By Gabriel Pogrund, who visited the Jungle refugee camp in Calais earlier today

It wasn’t the first time that bitingly cold morning visitors had been offered food at the Calais Jungle refugee camp. Earlier on, two refugees from Sudan, huddling over a bubbling portable gas-stove, beckoned a British interfaith delegation over for some complimentary coffee.

This gesture was different, though. The men were marking the death of a man, killed on the Eurotunnel tracks the night before.  On a bitter day for the camp’s Eritrean refugees, their Syrian neighbours took to the camps to distribute sticky, sweet treats: a North African mourning ritual.

The Eritrean man was found unconscious by the tracks – the fourth to die trying to enter Britain in just ten days. Days earlier a 20-year-old Iraqi man was found dead in a UK-bound lorry.

Discernible on the worried faces of men across the camp was the knowledge their fate might be similar. They were mourning a brother – but also their own dire predicament, because the next time the camp rips into those plump, fleshy dates, it could be for any one them.

“Ultimately, people are not going to stop trying to cross into the U.K.,” says Janner-Klausner. “They are desperate for sanctuary on our shores and will risk their lives getting here. The only way out is for Britain to offer legal crossing into our country, otherwise the body count will keep rising.”

Rabbi Laura with one of the residents of the camp

Imam Qari Asim, a lawyer who runs the thriving Leeds Mosque and was recently appointed MBE for his interfaith work, echoes his colleague’s views. “The UK’s humanitarian response has been heartwarming, but there’s no viable long-term solution to this situation but legal change.”

“Accepting refugees from Lebanon is an important step, but it isn’t enough and it won’t change the reality for refugees in Calais.”

The purpose of Janner-Klausner and Imam Asim’s visit was to highlight this uneasy truth: Britain has no facilities for processing asylum applications offshore, meaning the only way of entering the UK is illegally.

An EU law called “Directive 51”  says airlines can transport asylum seekers without valid travel documents, but that companies must make the judgement as to whether they’re legitimate – and foot the bill for a person to return home if their claim is ultimately rejected. Check-in desk clerks are unable to act as immigration officers and the financial risks are so great, refugees are just blanket barred from legal modes of transport. They are forced to cross the Mediterranean on rickety vessels run by people-smugglers, and then head to Calais in hope of a similarly illicit crossing there.

Every truckload of aid that arrives in Calais sustains this status quo: a camp composed of tents and testosterone, 4,000 stateless residents with no safe or legal way to the UK.

‘Britain has to acknowledge the presence of refugees on its doorstep and create offshore facilities so it can at least process asylum applications,” says Janner-Klausner. “It must accept some and distribute others to EU members state as part of an Europe-wide plan.”

Imam Asim is clothed in his clerical attire, meaning some Syrian refugees ask him for advice. “As-salamu alaykum [peace be upon you], brother, what should I do? What’s your advice for me” It’s a humbling question – and it leads to one answer.

“Go elsewhere,” says Asim. “I wish I could tell you otherwise, but right now there’s no safe way into the UK. Find sanctuary in Germany or Austria.”

As a British Muslim, he looks ashamed but resigned to his response. Until the UK government changes the situation for these refugees in legal limbo, “go elsewhere” is the best answer an imam or a rabbi can offer.