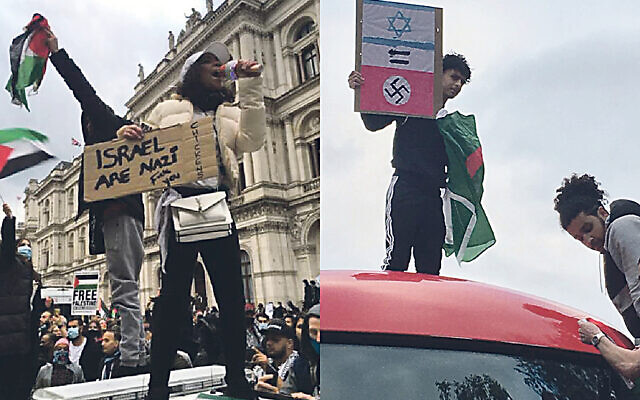 Antisemitic hate incidents during the first half of this year reached their highest-ever total – largely as a result of the wave of anti-Jewish hate in response to the recent conflict in Israel and Gaza.

A new report by the Community Security Trust (CST) showed there had been 1,308 anti-Jewish hate incidents reported to the organisation between January and June from across the UK.

This is a 49% increase on the 875 antisemitic incidents recorded during the first half of last year.

The month of May, when the conflict in the Middle East intensified, saw a monthly record of 639 antisemitic incidents and accounted for almost half of all the incidents recorded in the first six months of this year.

The total of 1,308 antisemitic incidents from January to June 2021 is higher than every full-year incident total prior to 2016.

Reacting to the latest CST report thr  Government’s Independent Adviser on Antisemitism, Lord Mann, said: “The scale and intensity of this rise in antisemitism will shock and abhor people across Britain.

“Many parents will worry about the dramatic increase in hate in educational settings.

“Please be reassured that my office will continue to work tirelessly to see antisemitism more widely understood and relentlessly opposed, be it on campus or off.

“I will continue to work with CST which acts as a model for the world in recording, analysing and acting upon this vile racism.”

CST’s Antisemitic Incidents Report January-June 2021 revealed how the surge in antisemitic incidents in May corresponding with the government’s relaxation of social distancing measures aimed at tackling the pandemic.

“It is possible that the loosening of social regulations, coinciding with the war in Israel and Gaza – a subject that triggers strong emotional responses – provided people with a potential release from months of lockdown-induced frustration,” the report reasoned.

Worryingly, there were  84 antisemitic incidents in which the victims or offenders were students or academics, or involved student unions or other student bodies.

DCC Mark Hamilton, the National Policing Lead for hate crime, said: “A huge rise in antisemitic hate crime in the UK at a time of conflict in the Middle East is shocking, but sadly not surprising, as we saw a similar response in 2014.

“When that earlier tension dissipated, we sought to learn from the challenges here and amongst the lessons we took from that experience was the importance of proactive work with affected communities and the value of effective partnerships.

“The Community Security Trust is an invaluable ally of the police at a local and national level and we quickly gathered together as tensions rose in 2021, seeking to reassure affected communities and to prevent hate crime.

“It was depressing to hear of the incidents of violence and the threats made to UK communities, who clearly have no involvement in the events unfolding in another continent.”

CST recorded 89 violent antisemitic incidents from January to June 2021, the highest ever recorded in the first six months of a year and an increase of 68% from the 53 violent incidents in the first half of 2020.

Eighty-seven of these violent incidents were in the category of Assault while two were classifiedby CST as ‘Extreme Violence’, meaningthey involved potential grievous bodily harm (GBH) or a threat to life.

There were 56 incidents of Damage & Desecration of Jewish property in the first half of 2021; 1,073 incidents of Abusive Behaviour, including verbal abuse, antisemitic graffiti, antisemitic abuse via social media and one-off hate mail; 85 direct antisemitic threats; and five cases of mass-mailed antisemitic leaflets or emails.

The most common type of language or imagery used in antisemitic incidents over the first six months of 2021 referenced the conflict in the Middle East, demonstrated anti-Zionist political motivation, or both.

This type of discourse was present on 693 occasions, compared with 151 in the first half of 2020 – a year without a significant trigger event from the Middle East.

Forty-three incidents directly compared Israel with Nazi Germany, while the terms “Zionism” or “Zionist” were employed in 68 incidents, often as euphemisms for “Jewishness” and “Jew”.

There were 277 incidents in which offenders used far right or Nazi-related discourse, of which 59 incidents evidenced far right political motivation.

The report said the pandemic has led those who wish to spread anti-Jewish hate to find new ways of doing so.

In the first half of 2021, CST received 13 reports of video conferencing events being hijacked with antisemiticmaterial. These ‘Zoombombings’ were unheard of prior to the Covid-19 outbreak, but quickly became a method by which antisemites could take advantage of the new social reality; there were ten such incidents between January and June 2020.

CST recorded 41 incidents containing antisemitic rhetoric alongside reference to the pandemic, rising from the 26 such cases reported over the same period in 2020.

Elsewhere in the UK, CST recorded 30 antisemitic incidents in Leeds, 28 in Gateshead, 25 in Liverpool, 17 in Birmingham and 15 in Borehamwood & Elstree.

CST recorded an antisemitic incident in all but four Police regions across the country.