Jewish leaders joined senior politicians at the Cenotaph on Remembrance Sunday, as memorial events were held events across the community to honour those who died.

The nation fell silent on 14 November as hundreds of veterans were joined by the Prime Minister and faith leaders in central London.

The event on Whitehall was given added poignancy by a return to pre-pandemic numbers, but it was overshadowed by the absence of Her Majesty the Queen, after Buckingham Palace announced on Sunday morning that she would be absent due to having sprained her back. The Prince of Wales, Boris Johnson, Keir Starmer and five former PMs were present .

Attending the ceremony, Chief Rabbi Mirvis tweeted a picture alongside other faith leaders and said, saying ““They shall grow not old, as we that are left grow old: Age shall not weary them, nor the years condemn. At the going down of the sun and in the morning, we will remember them.”

“The Chief Rabbi was honoured to be at the Cenotaph today to remember their sacrifice.”

The National Chairman of the Association of Jewish Ex-servicemen and Women (AJEX – the Jewish Military Association), led a delegation at the Royal British Legion’s Remembrance Sunday event at the Cenotaph. 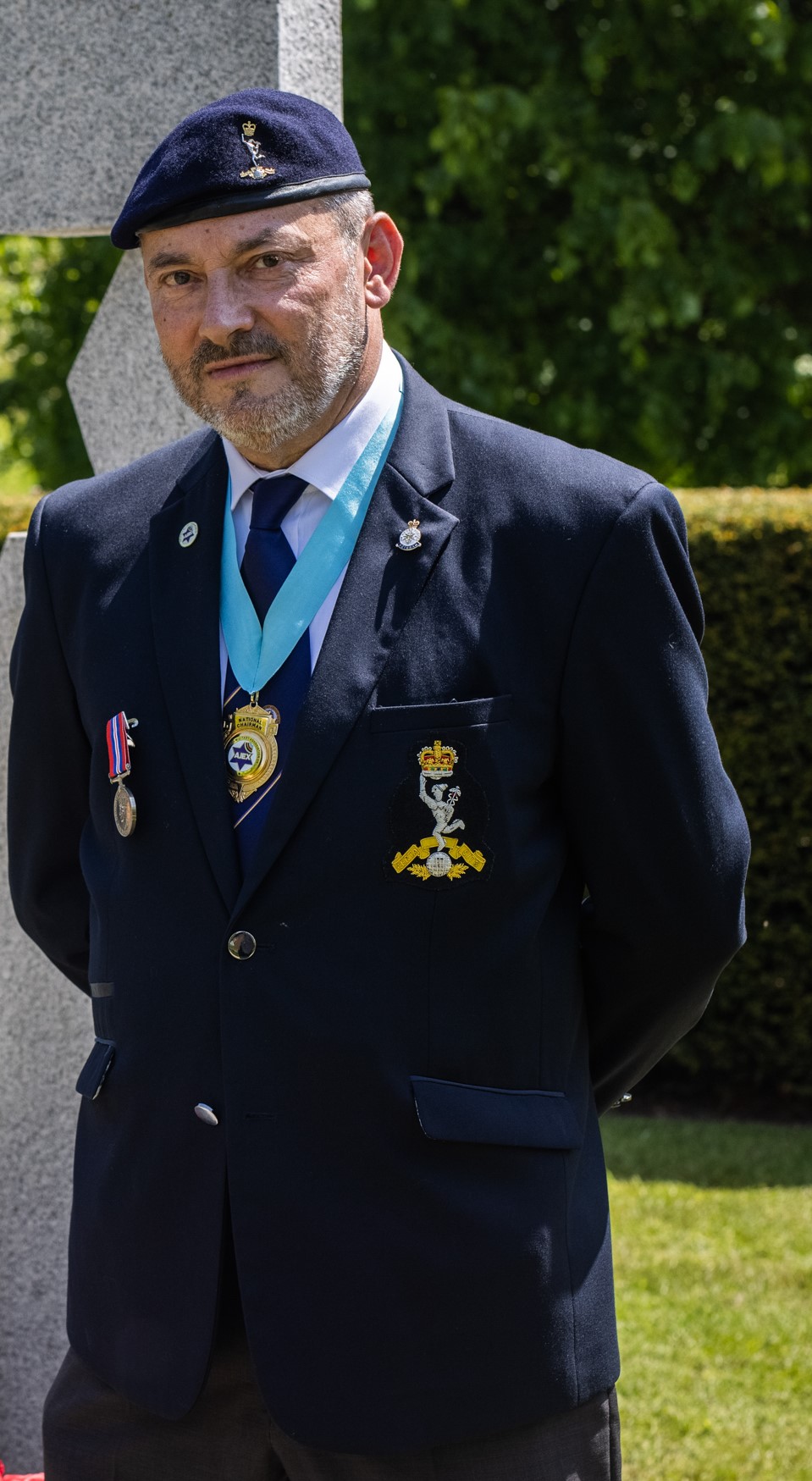 Ahead of the community’s own memorial event next Sunday, organised by AJEX, its chair Mike Bluestone said: “It was a privilege to remember and honour the memory of the brave men and women who have paid the ultimate sacrifice for our country. Being back in person at the Cenotaph for the National Service of Remembrance amongst thousands of veterans and currently serving personnel, was a truly special moment. It was extremely meaningful to represent Jewish ex-Servicemen and women and I was touched to experience the great camaraderie from other faith groups taking part”.

The Jewish Lads and Girls Brigade (JLGB) joined a ceremony marking 100 years of the Royal British Legion, also at the Cenotaph.

It said it “was honoured to have been invited to march alongside fellow Youth are United organisations at yesterday’s 100th Anniversary Poppy Legion Remembrance Parade at the Cenotaph. As always, we will be out in force this Sunday supporting our friends at AJEX UK”.

ICYMI: JLGB was honoured to have been invited to march alongside fellow @YouthareUnited organisations at yesterday’s 100th Anniversary @PoppyLegion Remembrance Parade at the Cenotaph. As always, we will be out in force this Sunday supporting our friends at @AJEX_UK. pic.twitter.com/6GtYR0cOnI

The Board of Deputies tweeted: “Many of us will never know the sound of gunfire or the shock of concussive blasts. We won’t know the terrors and toll of wars that rage on in our minds and bodies long after. Today we remember the fallen and we honour the courage and sacrifice of our veterans.” 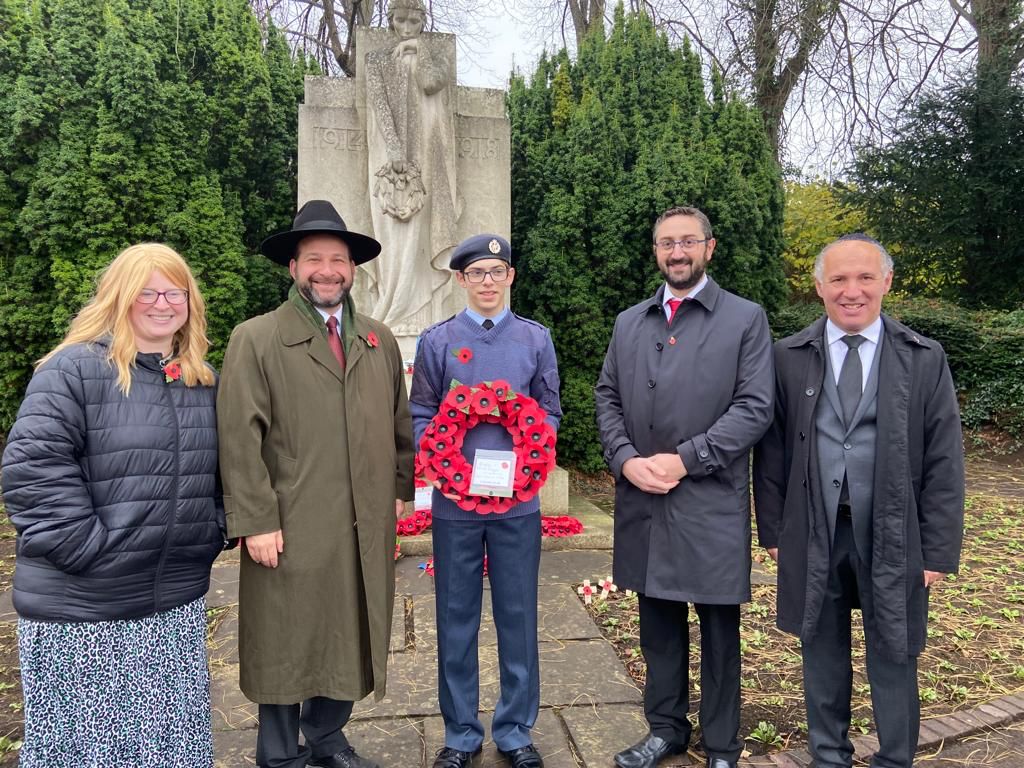 He said: “The return to in-person commemoration brought out our community in force. We were so proud that our civic and Jewish principles as a light onto the nations were on full display.”

Headteacher Rita Alak-Levi said: “We were honoured to commemorate the service and sacrifice of all those who have and continue to defend our country.” 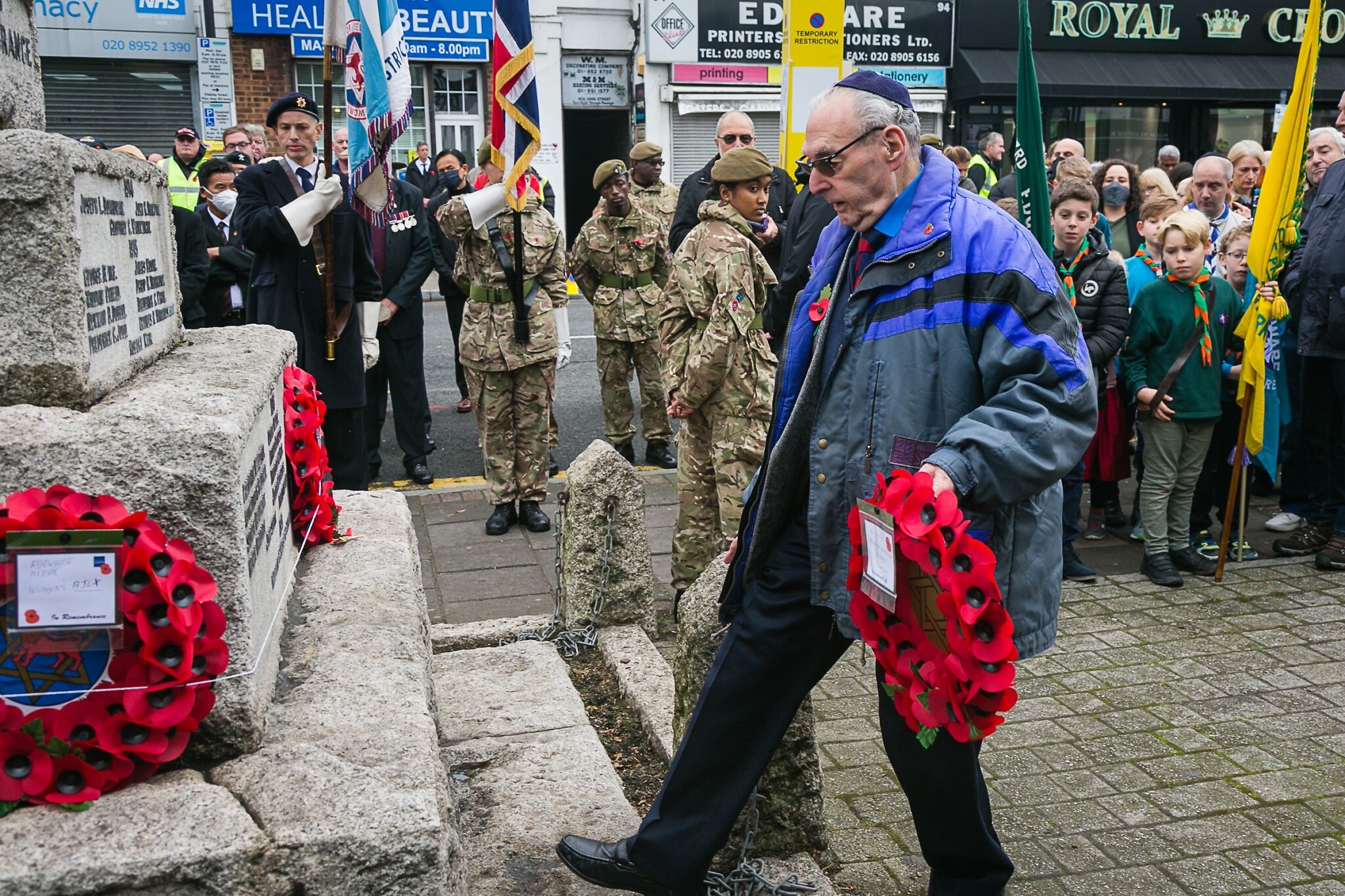 The community’s largest social care charity, Jewish Care marked the day with 92-year-old volunteer, Freddy Berdach, laying a wreath at the Edgware cenotaph. The veteran escaped Vienna in 1938 aged eight, and  served two years in the RAF during the Korean War.

Berdach said: “I was lucky, having survived when so many didn’t and I thank God every day for my blessings. It’s important for young people to know what life was like and what good opportunities they have today.” 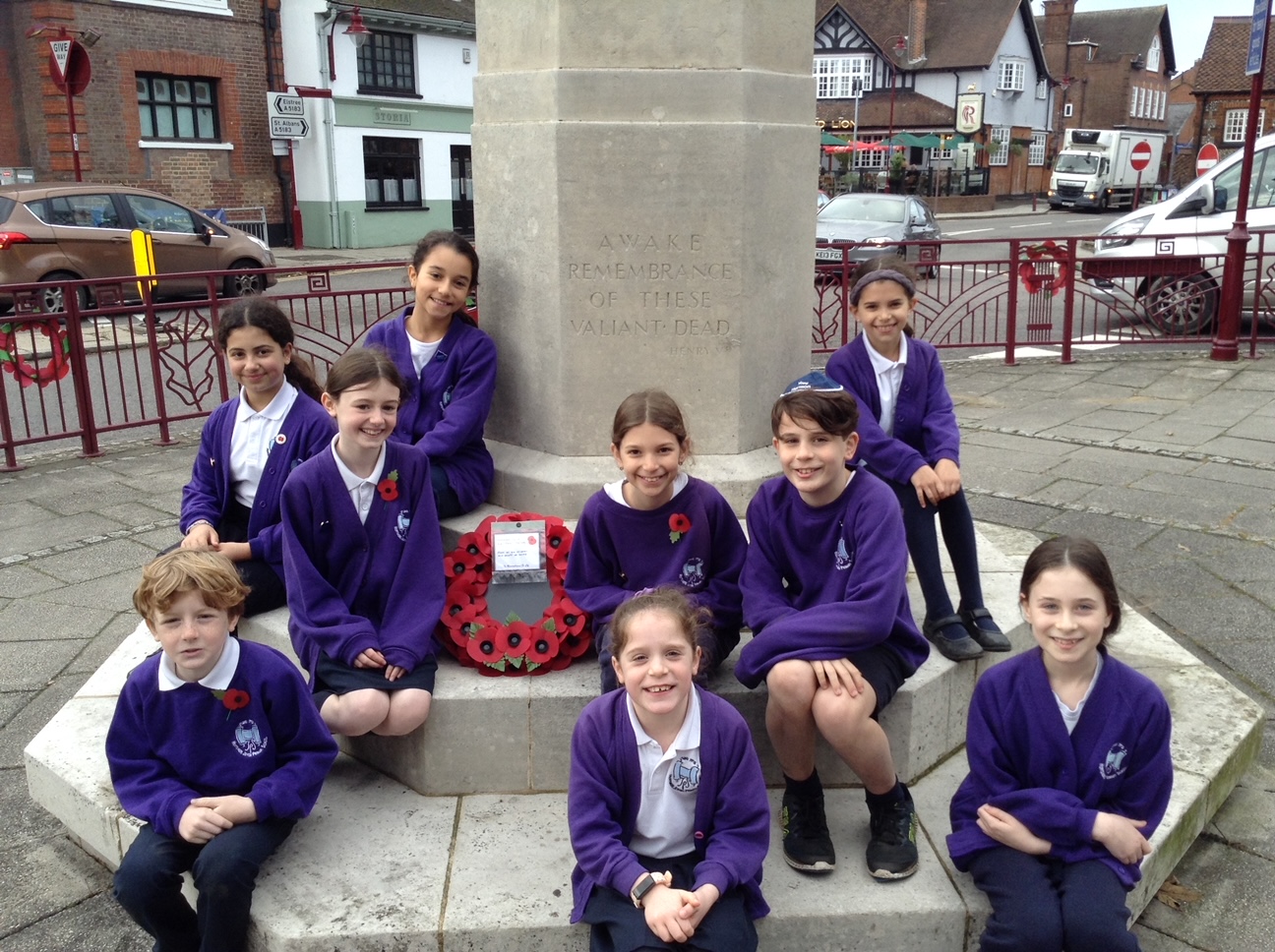 Sheila Golding also remembered her father, Joseph Schneider, who served in the First World War, her brother Bernard Taylor, who was in the RAF for 20 years, and her husband Nat Golding, who served in the Royal Signals saying, “I’m very proud of them all.” 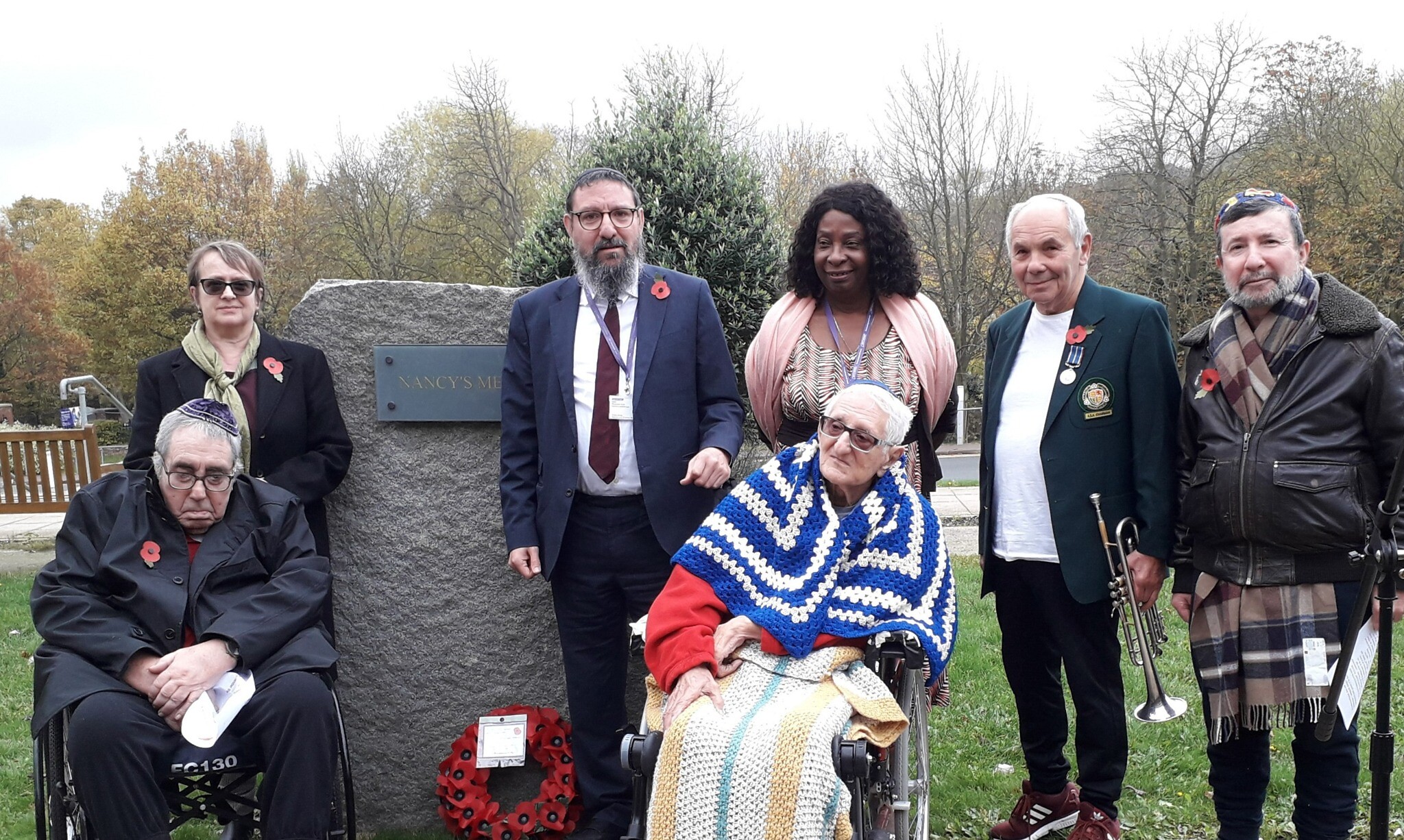 Jewish Care’s Chief Executive, Daniel Carmel-Brown, said: “The members of our community who are ex-servicemen and women are becoming frailer and the number who are able to share their stories with us is decreasing.

“It is so important that we pay tribute to the courage shown by those who served during the wars and since, so that we can live in freedom today.

“We continue to be inspired by their stories and honour them and the memory of those, who have sadly, over the years, lost their lives. We would like to thank the Hebrew Order of David for supporting our care home residents to mark the day.”