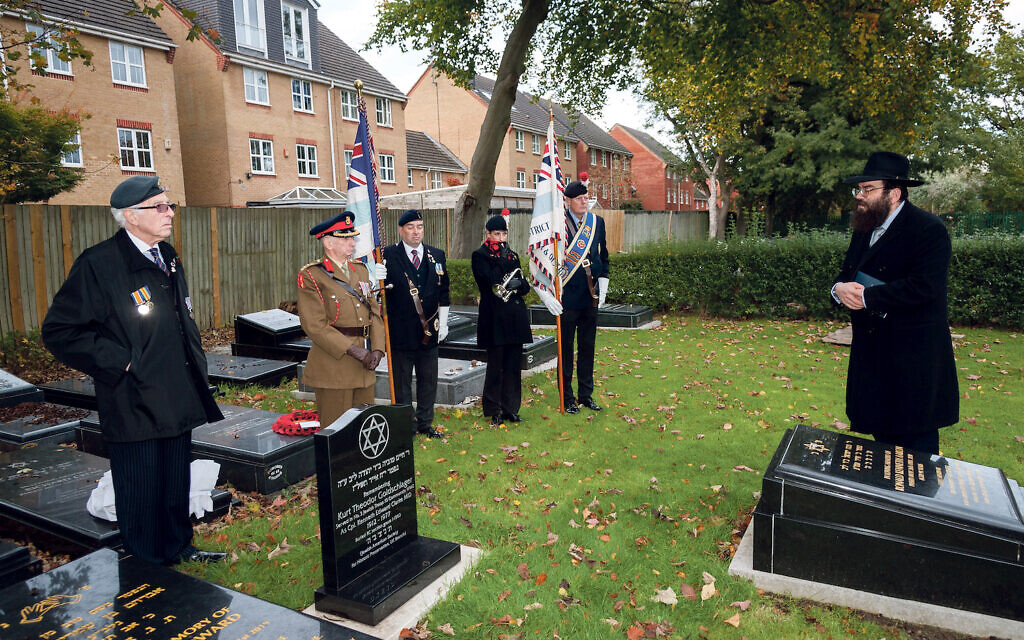 The grave in the cemetery’s Catholic section (© Mike Poloway.)

Throughout the 1930s, Kurt Goldschlager swam so well he was on the Austrian national team. By the mid-1940s, he was cycling – and not for Austria, but for the British Army, under enemy fire. He had swapped the lanes of the pool for the tracks of Nazi territory, the sound of cheering and applause for the sound of gunshots and explosions.

In the UK, Goldschlager – like many other European Jews fighting for the Allies in central Europe – had changed his name to something English-sounding. So, as he dodged the bullets and pedalled along to pass vital messages, he did so as 13801160 Private Kenneth Edward Clarke.

When he died in 1977, shortly after being violently mugged in Manchester, he was without family and was buried a pauper in the Roman Catholic section of Manchester’s vast Southern Cemetery. His wartime bravery, perhaps spurred on by his mother’s murder at the hands of the Nazis, which had led to him being mentioned in despatches, was by then long forgotten.

Goldschlager’s later life and death were likely to have passed unnoticed had his niece in San Diego not got in touch with Jewish military researchers in the UK to alert them. It quickly became apparent that no one had known Goldschlager was Jewish when he died.

The Commonwealth War Graves Commission (CWGC) was alerted, funding was sought and found, and a new headstone was made, one adorned with a Star of David, recording how Goldschlager was a commando who fought in No 3 Troop (Jewish Troop) during the Second World War, and had been laid to rest 44 years previously with a Catholic burial. This month, in what promises to be a very moving ceremony, Goldschlager’s stone will be reconsecrated in Manchester at an event attended by members of the city’s Jewish community and organised by the chairman of the Manchester branch of AJEX, Joe Flacks.

Born in Vienna in 1912, Goldschlager was one of four brothers, one of whom later lived in Chicago under the surname Gordon. Their father, Julius, was an architect who died of natural causes in 1940. His mother, Irene, was deported to Auschwitz, where she was murdered in 1942.

Years before, in his twenties, the sporty Goldschlager had been on the Austrian national swimming and water polo teams, but was forced to flee for the UK in June 1939.

He worked for a Jewish charity in London before joining the British Army’s Pioneer Corp, in which he served from 1940 to 1943.

He later volunteered twice into No 10 International Commando, where he was an interpreter and interrogator on the front line in the final four months of the war, the Army using his wide language skills. 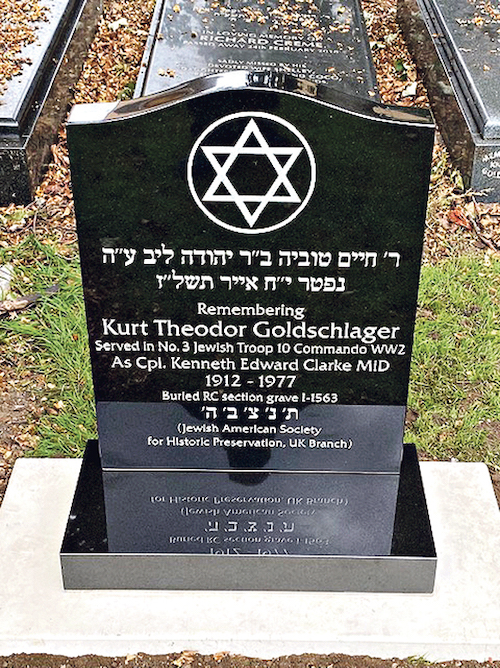 Goldschlager’s bravery was recorded after fighting near Osnabruck, in north-west Germany, where he had “cycled under heavy fire and in full view of the enemy” to get a medical team to an ambushed and wounded
commando unit.

“It saved many lives,” says British Jewish military researcher Martin Sugarman, who worked with the CWGC to bring about the correction.

“He arranged for artillery covering fire for the troop while they escaped. He then entered Osnabruck ahead of his troop and persuaded a whole company of heavily-armed Hungarian Nazis to surrender, an act that was apparently captured on film and saved many more lives.”

After the war, Goldschlager returned to the UK and ran a ladies’ tailoring business in Harrow Road, London, but this was unsuccessful and he moved up to Manchester, never marrying. Until an American relative got in touch, no one had known that he was Jewish.

A US-based philanthropist, Jerry Klinger, of the Jewish American Society for Historic Preservation, heard about the story. 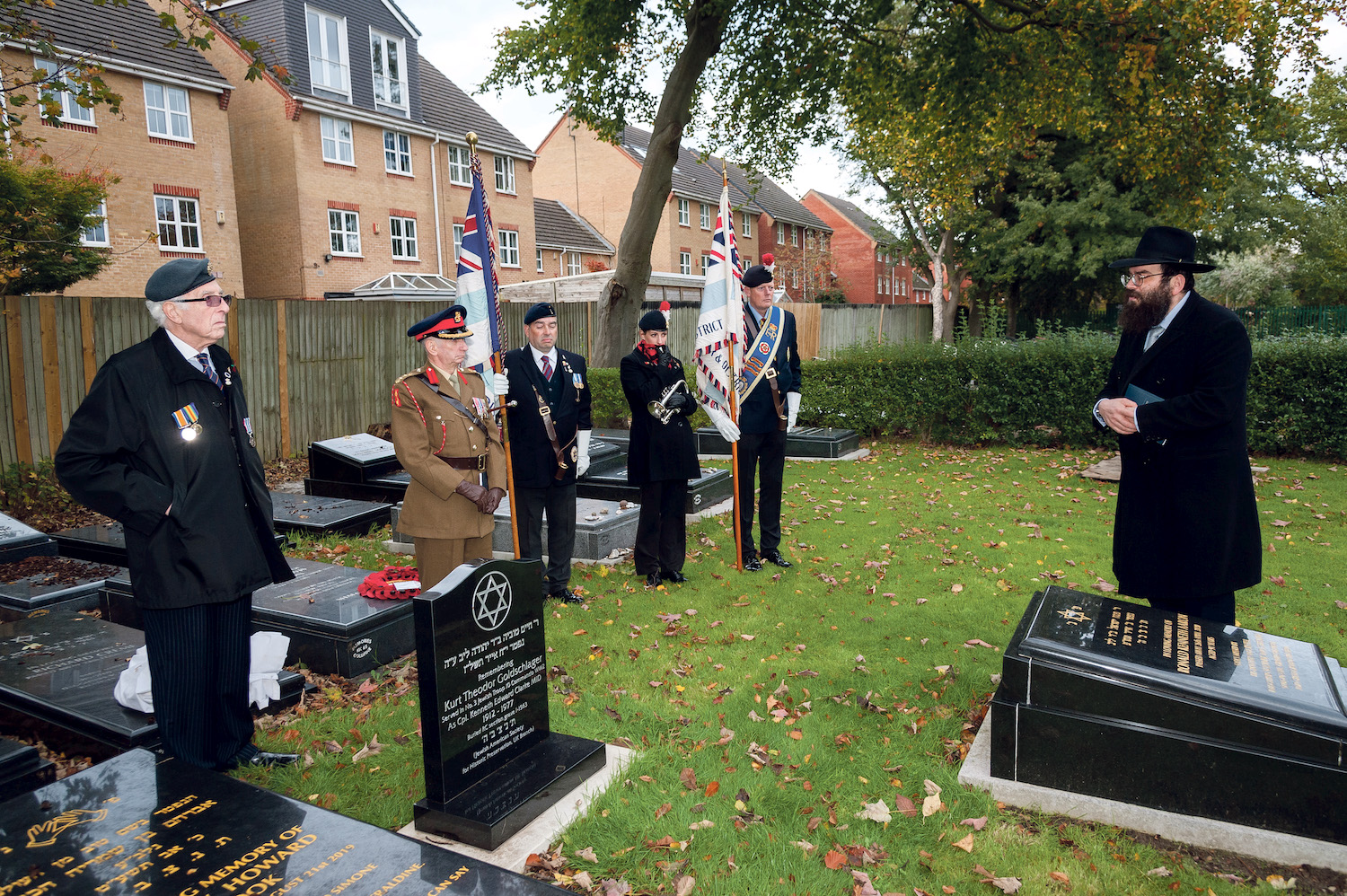 The grave in the cemetery’s Catholic section
(© Mike Poloway.)

Klinger paid to have both a headstone with Goldschlager’s name placed on his unmarked grave, and a larger headstone placed in the nearby Jewish cemetery. “It explains who Kurt was and how his grave location, once unknown, can now be found,” said Sugarman.

“He is a Jewish war hero, whose burial place was all but lost. It is now remembered and Kaddish will be said for him each year by the Jewish community in Manchester.”

On seeing the stone for the first time, his niece Tracy Fish described the moment as “very moving”. She said: “I’m sat here tearing up. I’m somewhat speechless.”

Fish added: “It never occurred to me that the stone would be so individually personalised and so beautiful. I was expecting a simple plaque with all the names of the men buried there who served in the No 10 commandos.