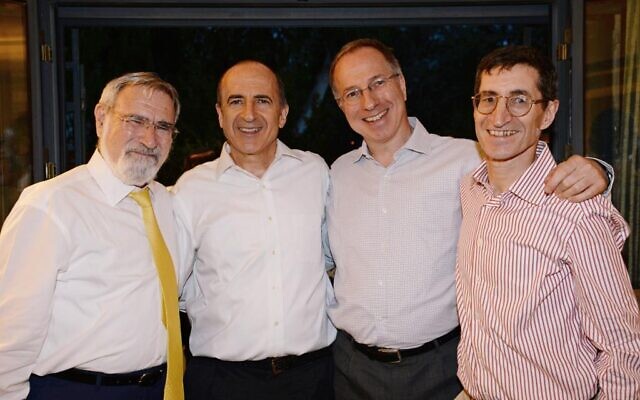 One of rabbi Sacks’ brother’s has told Jewish news he ‘lost a brother and gained a giant’ as the reflected on how the year since his passing has helped him to understand his full impact.

Alan Sacks said: “ with perspective, I’ve seen how huge his personality was. How he built the greatest level of intellectual achievement, and at the same time, made time for everybody on every small issue, and always with dignity”.

Jonathan Sacks, who had three brothers, Alan, Eliot and Brian, died 12 months ago after a battle with cancer, aged 72.

Marking the yahrzeit of his death, Alan said for the first 18 years of my life, his brother was “so far removed from me, so far ahead of me, it’s difficult to describe him as a brother.”

“By the time he was 15, or 16, he was a pure intellectual”, Alan said. “He was not interested in all the things that I was interested in. He was far too busy reading about politics”.

Despite the difference in age and interests, the two stayed “very close”, and after Alan moved to Israel, had regular long conversations.

He also “developed a fantastic relationship with my children” and “took a huge amount of pride in the fact that he had nephews and nieces in Israel defence forces.”

Alan Sacks recalled that “this wasn’t Rabbi Sacks; dignified, silver, yellow-tie wearing chief rabbi. It was really close and intimate. And he would be fascinated, he wanted to hear from my kids about the latest Israeli pop music or talk about real matters as their level.”

He recalled interviewing him in 2017 when both of them were in New York. Miliband said, “it was very Jonathan Sacks, because the meeting itself was extraordinarily erudite as you’d expect from him. But what has never been revealed until this podcast is that it was the night of a massive Bernie Sanders rally.

“The former chief rabbi didn’t hesitate to vault over police barriers, to get to an entrance that was otherwise blocked with cheering Bernie Sanders supporters”.

Miliband, whose parents were Jewish refugees from Nazi Germany, is an atheist. He said however it struck him as “someone who wasn’t a believer, Jonathan never made me feel that that affected his view of me, which is pretty big.

He said: “I feel very lucky to have had so many chances to get an insight into the way the former Chief Rabbi thought about the deep issues of universalism and pluralism that so preoccupied him throughout his life.”

To mark one year since his passing, the Rabbi Sacks Legacy Trust is running a series of events, talks and conferences to remember his life and work.