The former Chief Rabbi’s Twitter account states: “It is with the deepest sadness that we regret to inform you that Rabbi Lord Jonathan Sacks passed away early this morning.”

Rabbi Lord Sacks, one of the leading British-Jewish voices of his age, died on Saturday, aged 72.

Lord Sacks had twice battled cancer earlier in his life and was being treated for a third time.

Former Prime Minister Tony Blair, a personal friend of Rabbi Sacks, paid heartfelt tribute, saying: “I am deeply distressed and sad at the news. Jonathan was a wonderful friend, a beloved mentor, a philosopher of extraordinary insight and of course a religious leader respected well beyond the Jewish community and well beyond the shores of Britain. His influence was vast and his reach immense.

“A brilliant speaker and thinker he had the rarest of gifts – expressing complex ideas in the simplest of terms. A man of huge intellectual stature but with the warmest human spirit. My heart goes out to Elaine, his children and wider family and the Jewish community. He will be deeply mourned.”

United Synagogue President, Michael Goldstein said: “There are no words. How can I adequately express what Rabbi Sacks means to me, my family, my community, my organisation and the Jewish people? The world is a darker place right now. A flame of Torah has gone out. But the Torah Rabbis Sacks taught us will continue to be taught across the world for generations to come and will endure forever.

“To Lady Elaine, to their three children, to Rabbi Sacks’ three brothers and the entire family, on behalf of everyone connected with the United Synagogue, I wish you all Chayim aruchim, long life.”

“Rabbi Lord Sacks was an extraordinary ambassador for Judaism, helping many to understand and be proud of their heritage. He will be deeply missed, not just within the Jewish world, which benefited immeasurably from his teachings, but far more widely, by all those whose lives he enlightened with his wisdom, profundity and inspiration. 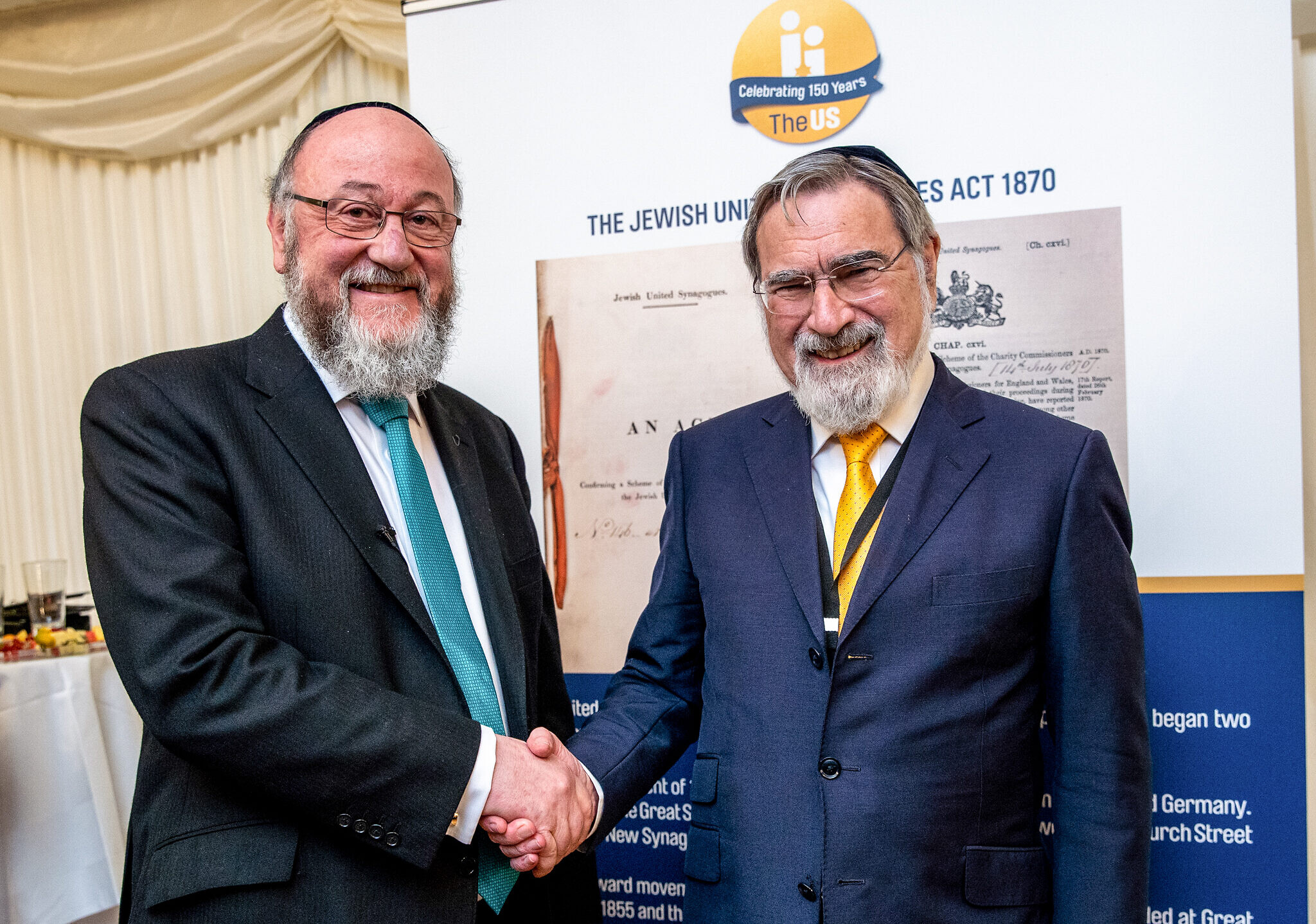 “Our hearts go out to Lady Elaine, Joshua, Dina, Gila and the entire family. May they be comforted by the knowledge that his remarkable legacy will live on in the hearts and minds of the countless people he inspired.”

Board of Deputies President Marie van der Zyl said: “We are distraught at the news of the passing of Rabbi Lord Sacks. He was a giant of both the Jewish community and wider society. His astounding intellect and courageous moral voice were a blessing to all who encountered him in person, in writing or in broadcast.

“His outstanding tenure as Chief Rabbi led to a revolution in Jewish life and learning which has ensured his legacy will pass not just through his own beloved family, but through generations of our community’s young people too.

Read more – Tributes from across the community: 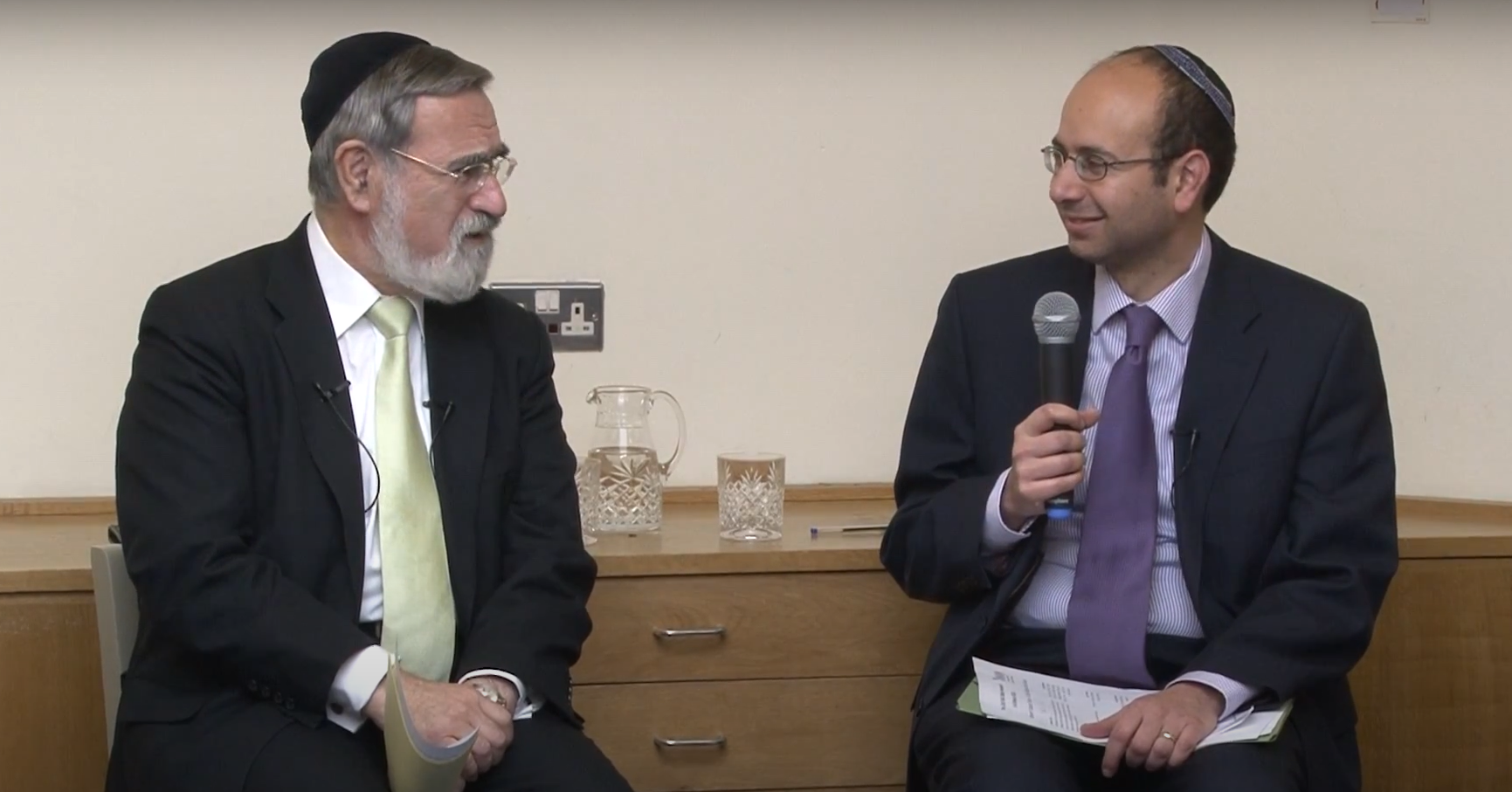 “Our hearts go out to his wife Elaine, his children Joshua, Dina and Gila, his brothers and the whole family. He will be much missed by us all.”

Jonathan Goldstein, Chair of the Jewish Leadership Council, wrote: “We are saddened to hear the news of the passing of Rabbi Lord Jonathan Sacks. As former Chief Rabbi, Sacks was one of the greatest Jewish and religious thinkers of our time. His leadership over decades transformed the role of Chief Rabbi into a national and global symbol. He has inspired countless Jews, people of faith and no faith. We have lost one of our greaters teachers and leaders. ”

Former JLC Chairman, Sir Mick Davis said: “We have lost a great moral authority, not just of the Jewish people but of the world at large. Jonathan Sacks was an extraordinary thinker and inspirational communicator who represented the best of humanity. His words, deeds and leadership were imbued with a fundamental decency that reflected the will of his creator. He leaves a legacy and a body of work that will continue to enrich Judaism and humanity’s quest for knowledge and understanding long into the future. We have lost a friend and teacher and Barbara and my thoughts are with his wife Elaine and his children, Joshua, Dina and Gila. May they be comforted among the mourners of Zion and Jerusalem.” 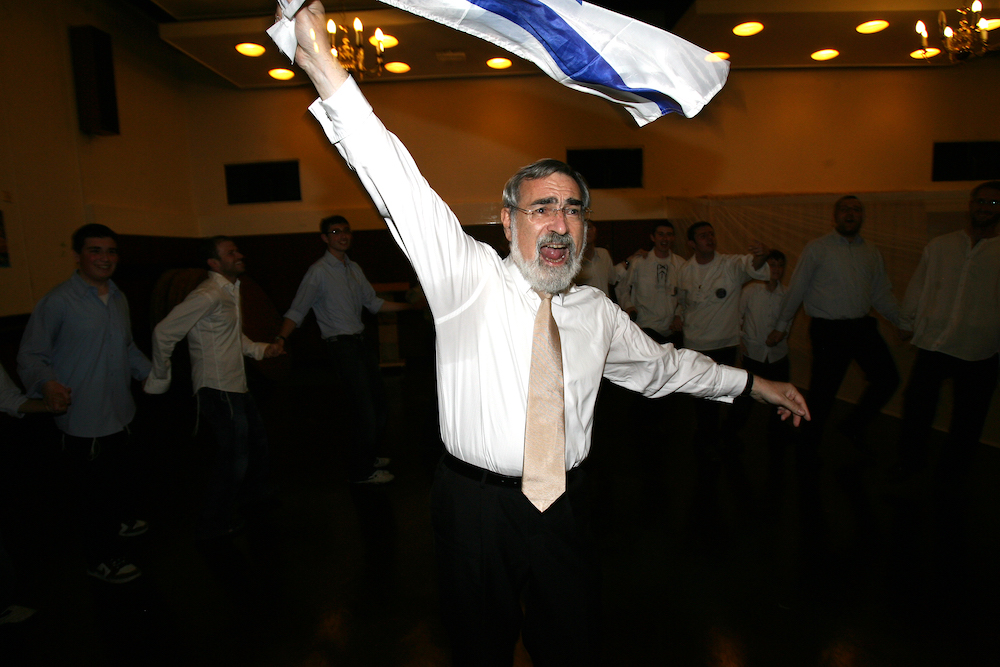 Mark Gardner, Chief Executive of the Community Security Trust (CST) said: “The loss of Lord Sacks has been very deeply felt by CST, our Chairman, our trustees, volunteers and staff. For 22 years, CST provided close protection bodyguard security for Lord Sacks in his role as Chief Rabbi.

“In that time, he and his family treated our staff and volunteers with the utmost respect and friendship. So much so, that he even officiated at the weddings and simchas of our members.

“We, in turn, held him in the very highest regard and affection. Beyond these very human and personal relationships that went to the heart of his leadership, Lord Sacks was always a great champion for CST, and his moral authority against both terrorism and antisemitism was extraordinary.” 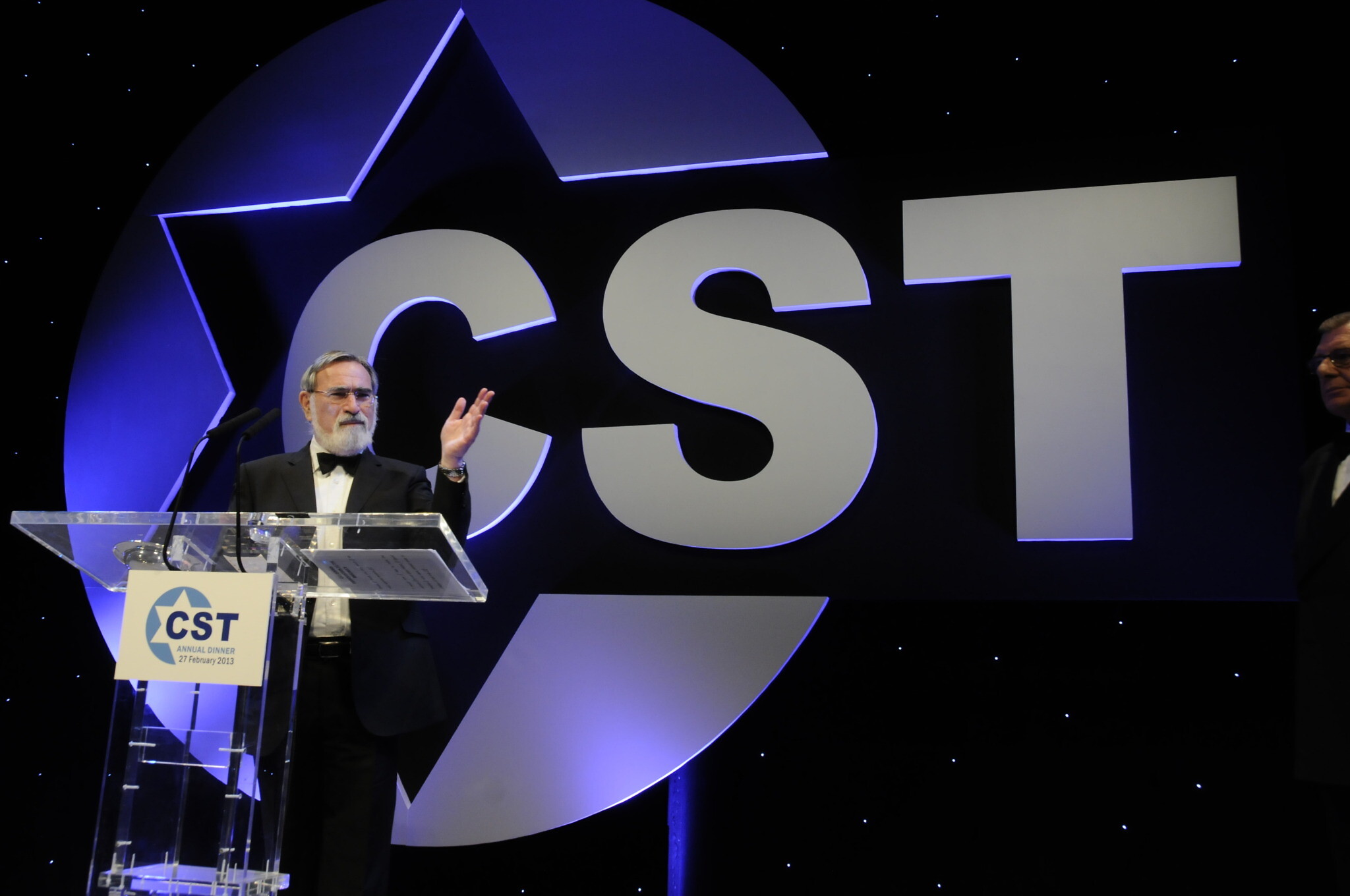 Rabbi Dr Andrew Goldstein, President of Liberal Judaism, paid tribute saying he shares “the appreciation of so many within our community, and far beyond, for the life, work and personality of Rabbi Lord Jonathan Sacks.

“He brought so much recognition to, and respect for, the Anglo-Jewish community by his erudition, broadcasting, lectures and books. His intellectual contribution to modern Orthodox Judaism was immense. His wisdom and writings were appreciated by Jews and non-Jews across the spectrum of religious belief and within the secular academic world.

“Indeed, we have been moved by the number of people within Liberal Judaism sharing their tributes over the weekend. On a personal level he was always friendly and collegial whenever we would meet.”.

The Union of Jewish Students tweeted: “We are extremely saddened to learn of the passing of Rabbi Lord Jonathan Sacks z”l, a giant of our community. Baruch Dayan Ha’Emet, our community and the world has lost a true leader.”

Rabbi Pinchas Goldschmidt, president of the Conference of European Rabbis, said: “We are truly saddened to hear of the passing of our associate vice president, Rabbi Lord Sacks, as we come out of the Sabbath. Rabbi Sacks was a giant of World Jewry and will be truly missed. His scholarship and oratory skill were without parallel and he has been an inspiration to an entire generation, no matter their faith. We hope his memory will be a blessing to his family and all those who were influenced by him.”

Dr. Moshe Kantor, President of the European Jewish Congress said: “Rabbi Sacks’ passing is a devastating blow for world Jewry as he was a towering figure of Judaism, who represented the Jewish People’s finest face to the outside world”. 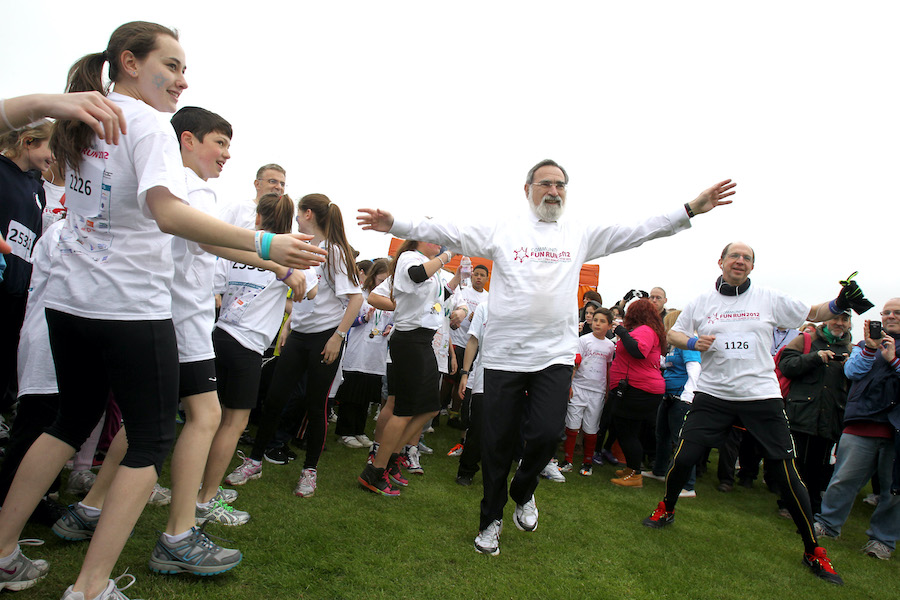 “He resolutely defended Judaism, the Jewish People and the State of Israel while demonstrating a distinct commitment to compassion, truth and tolerance within Jewish thought and practice.”

“His teachings will live on through his countless sermons, numerous books and wise thoughts that will continue to illuminate Judaism for generations to come. May his family be comforted among the mourners of Zion and Jerusalem.”

Lord Sacks held the post of Chief Rabbi of the United Hebrew Congregations of the Commonwealth from 1991 to 2013. 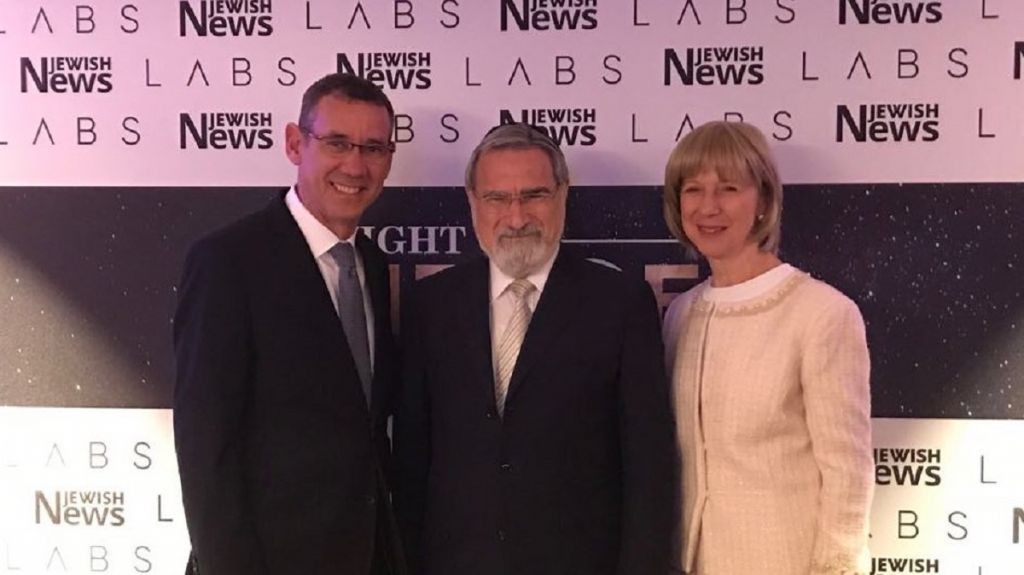 Rabbi Lord Sacks (centre) with his wife Elaine, and former Israeli Ambassador to the UK Mark Regev, at the Night of Heroes.

He was the author of numerous highly-acclaimed books on the role of faith in the modern age and the recipient of many coveted awards, including  the Jerusalem Prize, The Grawemeyer Prize for Religion, The Norman Lamm Prize, Yeshiva University, the American National Jewish Book Award for The Koren Sacks Pesah Mahzor and Templeton Prize.

Karen Senitt of the The Alan Senitt Memorial Trust added her tribute, saying: “Our thoughts and prayers are with his family, friends and community at this time. The strength and leadership he gave  not only the Jewish community but all those that had a blessing to know him will forever be remembered and his wisdom and warmth will be sorely missed. The personal time and support he gave the Senitt family will always give them strength. May his memory be for blessing.”

As chief rabbi, he served under four prime minister: John Major, Tony Blair, Gordon Brown and David Cameron. In 2009 he was made a peer.

Respects flooded in from the world of politics, with Prime Minister Boris Johnson tributes, saying : “I am deeply saddened by the passing of Rabbi Lord Jonathan Sacks. His leadership had a profound impact on our whole country and across the world. My sincere condolences to his family, friends and the Jewish community. May his memory be a blessing.” 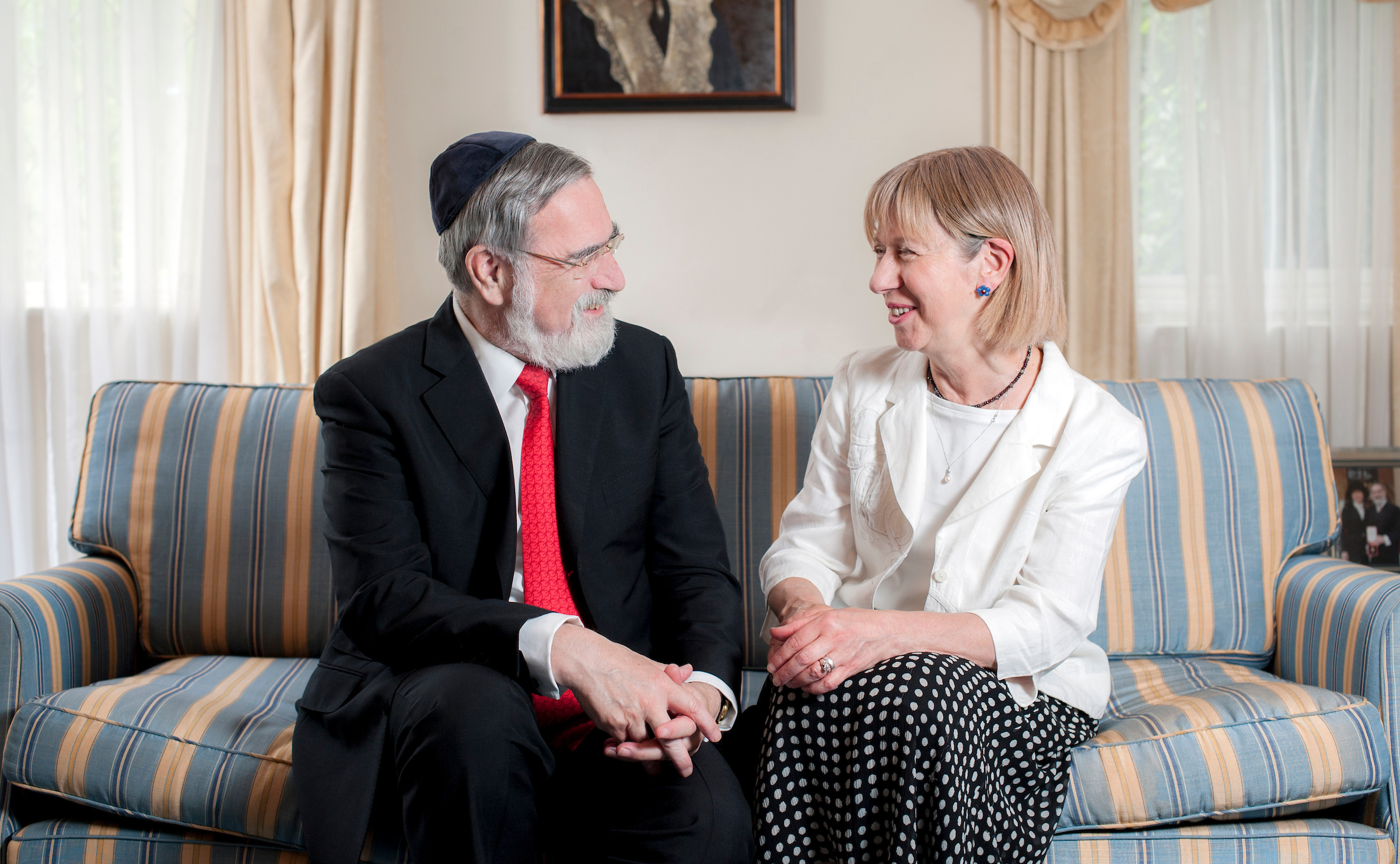 Labour leader Keir Starmer wrote: “I want to express my condolences on the passing of former Chief Rabbi Lord Jonathan Sacks. He was a towering intellect whose eloquence, insights and kindness reached well beyond the Jewish community. I have no doubt that his legacy will live on for many generations. My deepest sympathies to Lady Sacks, the family and to the entire Jewish world on their loss.”

London Mayor Sadiq Khan writing on Twitter, it was: “Extremely sad news. My prayers are with Rabbi Lord Sacks’ family. I benefitted hugely and learnt a lot from him. May his memory be a blessing.”

Israel’s president Reuven Rivlin paid respects, saying: “We will always remember his warning against violence in the name of God and his belief that we can heal a fractured world.”

Mourning the loss of Rabbi Lord Jonathan Sacks ז"ל.
We will always remember his warning against violence in the name of God and his belief that we can heal a fractured world.
Condolences to his family, to British Jewry and to his students. May his memory be a blessing. pic.twitter.com/BJBLEIXmIi

Karen Pollock, Chief Executive of the Holocaust Educational Trust also paid tribute, saying: “It is hard to put into words the loss of Rabbi Lord Sacks – an indomitable titan of the Jewish community.

“He was an Ambassador for our community, for this country and beyond. His supreme intellect, endless books and writings reached far beyond our shores. His vision, leadership and wisdom changed our world for the better as the greatest modern religious thinker of our time.

She said he “was a firm friend and passionate supporter of Holocaust education and remembrance, revered by the survivors. It was the greatest privilege to know and work with Rabbi Lord Sacks. I learnt so much from him – his openness, encouragement of others and his boundless energy for thought and debate.

“He was irreplaceable and peerless.”

Holocaust survivor and former Olympic weightlifter, Sir Ben Helfgott, added: “Rabbi Sacks often talked about the strength and inspiration he took from the survivors but it was us who took strength and inspiration from his warmth and wisdom and who are grateful for his courage in fighting anti Semitism and his determination that we all respect the dignity of difference. Sending sincere condolences and wishes for long life to Elaine and Rabbi Sacks’ family. His memory certainly will be for a blessing.” 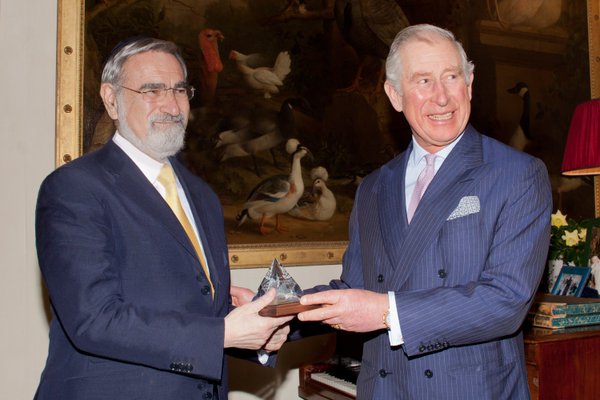 Archbishop of Canterbury, Justin Welby said rabbi Lord Sacks “was always someone who you could relate to instantly. He was always thoroughly part of the world and he relished that.

“He had a deep commitment to interpersonal relationships – and when you met him you couldn’t help but be swept up in his delight at living, his sense of humour, his kindness, and his desire to know, understand and value others.”

“It was that rare combination – profound depth, and equally profound commitment to relating with others – that made the leadership he offered possible.”