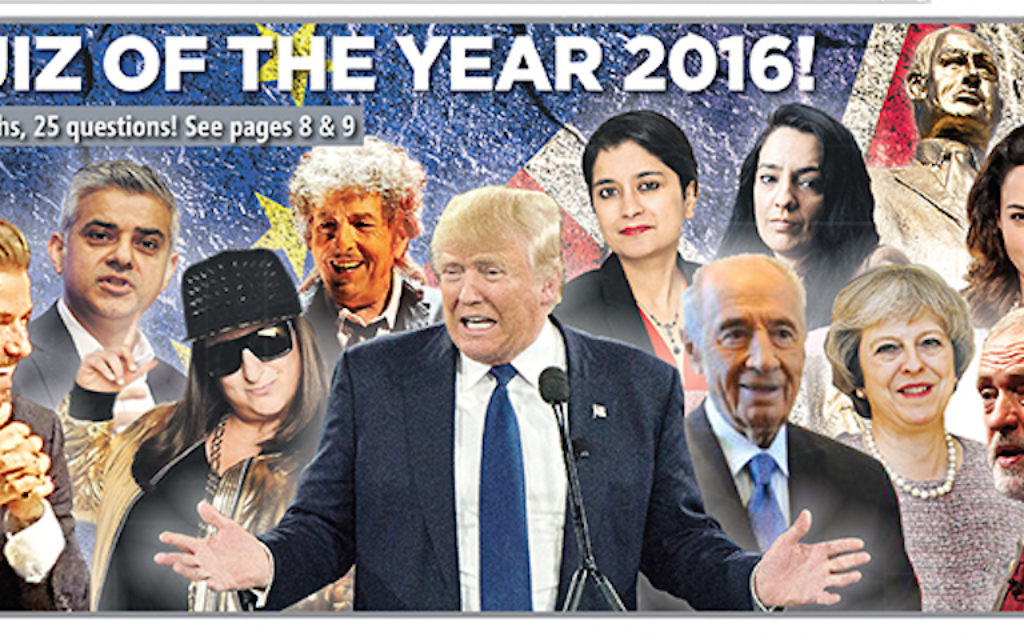 Which ridiculous concept became reality in 2016?

How did a Methodist church in Marylebone agree to balance the scales during its awareness-raising ‘checkpoint’ exhibition?

Which Australian-born diplomat became Israel’s new ambassador to the UK?

Who issued a heartfelt apology after appearing to suggest that Israeli Jews should be deported to the United States?

Which national figure was commemorated on a Royal Mail stamp after a JN campaign?

Which giant of the Jewish world, who died this year, once said: “The Jews’ greatest contribution to mankind is dissatisfaction”?

David Baddiel’s Radio 4 show was dropped after 120 complaints about crude jokes on which subject?

What colour did Shami Chakrabarti paint her report into anti-Semitism in the Labour Party?

Which famous footballer said this year he felt “partly Jewish”?

How has the National Holocaust Centre and Museum in Nottinghamshire ensured that survivors continue to talk to schoolchildren long into the future?

How many applications for new Jewish secondary schools in or near Barnet were submitted after the government lifted its 50 percent cap on faith-based admissions?

Which Israeli football team knocked Southampton out of the Europa League?

Ozzy the Dog became a hero after finding what near a north-London playground?

How did the UK’s Israeli and Palestinian ambassadors lock horns in September?

Who were forced to continue their battle to pray at the Western Wall, despite the Israeli government designating a section specifically for them?

What did research by the Institute for Jewish Policy Research find that Jewish students were experiencing on campus?

Why were plans for a new eruv in south Manchester ditched?

Which country did Jeremy Corbyn politely refuse to visit?

In which extreme sport did grandmother and rebbetzin Freda Kaplan of Norris Lea Synagogue participate for a Yom Kippur charity fundraiser?

Why did British Jewish leaders campaign for a UK ban on the controversial Rabbi Yosef Mizrachi this summer?

A)  He’s said fewer than one million Halachic Jews died in the Holocaust
B)  He’s said children with severe disabilities sinned in a past life
C)  Both, if you can believe it. And that’s not the half of it

Which Jewish singer won the Nobel Prize for Literature?

Which European country’s foreign ministry reported a 20-fold increase in applications for citizenship from British Jews in the wake of the Brexit vote?

What Jewish self-defence technique did Kim Kardashian decide to take up after her robbery ordeal in Paris?

What was the name of the business owned by Barnet-based diamond dealer Danny Koort, who was sentenced to 11 years in jail for laundering at least £30million?

Why did the chairman of Radlett United Synagogue criticise four Yavneh pupils?