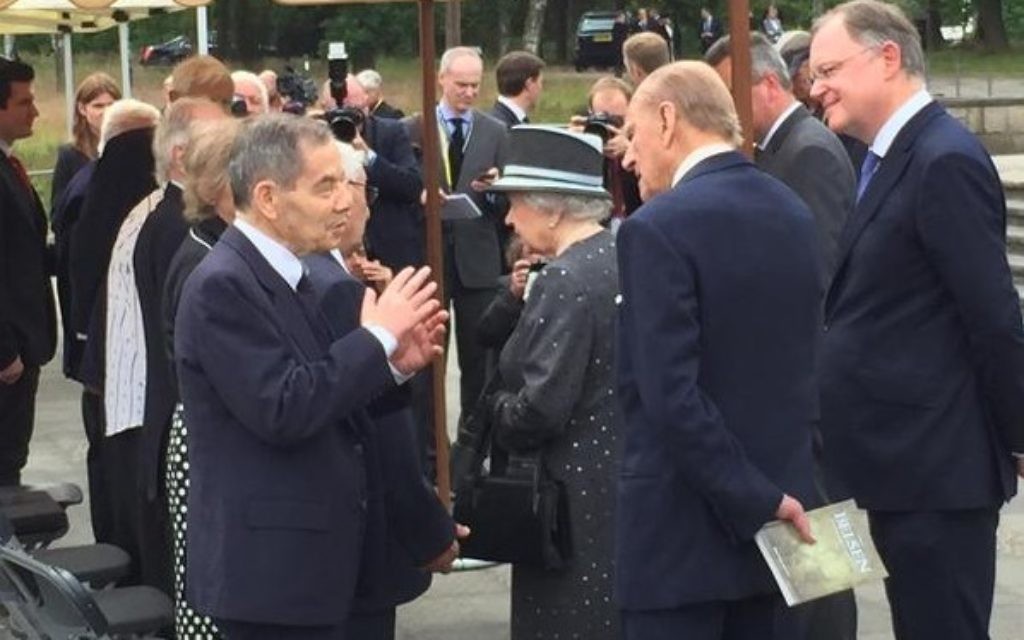 The Queen & P. Phillip talk to British survivors & liberators 70 years on. This is Rudi Oppenheimer. (Source: @PeterBazalgette on Twitter)

The Queen laying a wreath at the the memorial Inscription Wall (Source: @gordonrayner Twitter)

A survivor of Bergen-Belsen has told Jewish News that he was ‘privileged’ to have met the Queen and Duke of Edinburgh during their visit to the camp to pay respects to the tens of thousands of people who died.

Rudi Oppenheimer, 84, met the Queen and Duke at the former camp in Germany on Friday, during the Queen’s visit.

Speaking to Jewish News, Oppenheimer, who was liberated in 1945 and lost both of his parents at the site, spoke of his ‘short but emotional’ encounter with the Queen and Duke.

He told the Queen about losing his family, and surviving in Belsen for ’14 long months’, with his brother and sister.

Rudi also gave the Duke of Edinburgh a book that was his brother’s, and which was signed by his brother – who had recently passed away.

He said it was “amazing that she did come today”, and that he was ‘very emotional.’

Rudi added he, and other survivors were “very grateful” as it would make people more aware of Belsen.

“The Queen came mainly for the liberators” he said.

The Queen and the Duke of Edinburgh laid a simple wreath at a memorial to all those who perished following their internment at the camp, which was liberated 70 years ago by British forces.

With quiet dignity and the minimum of protocol, the royal couple toured the site in northern Germany which was razed to the ground and is now a museum and memorial to those who died.

The Queen, who is patron of the Holocaust Memorial Day Trust, has not visited a concentration camp during previous state visits to Germany.

At the site’s Inscription Wall, she and Philip laid a wreath near the words “To the memory of all those who died in this place”.

The monument also bears other poignant words in a number of languages including Yiddish, Hebrew and Latin.

The Queen and the Duke paused to view a gravestone erected in memory of Anne Frank, who is in a mass grave (Source: @gordonrayner Twitter)

Among those who perished at the site were Anne Frank and her sister Margot who died a few months before British troops walked through the gates and liberated those interned on April 15 1945.

Near to where the wreath was laid was a headstone dedicated to the sisters, who became world-famous through Annes diary which was written while she and her family hid from the Nazis in Amsterdam before their capture.

Chief Executive Karen Pollock MBE, said: “Today was a very special day, not only for the Holocaust survivors who met Her Majesty the Queen and His Royal Highness the Duke of Edinburgh, but for all of those survivors who somehow managed to rebuild their lives in Britain and continue to feel so grateful for the safe haven they found.

“Bergen-Belsen has a central place in our history, and as the eyewitnesses grow older and frailer, we must all take on the responsibility to remember what happened there. That Her Majesty has visited Bergen-Belsen in such a significant year – 70 years on from its liberation – is particularly poignant and shines a spotlight on the importance of Holocaust education and remembrance.”

Brigadier Hugh Llewellyn Glyn Hughes, the 2nd Army’s deputy director of medical services, was the first to arrive at the site and took control of the relief operation.

He later said: “No description or photograph could really bring home the horrors that were outside the huts, and the frightful scenes inside were much worse.”

The British troops found 10,000 prisoners dead when they entered the gates, and thousands more suffering from malnutrition, disease and the brutal treatment they had endured.

The Duke and Queen remember the 70,000 victims of Nazis (Source: @gordonrayner Twitter)

In the months leading up to liberation, the population of Bergen-Belsen, which was not designed as an extermination camp, had quadrupled to 60,000 and conditions worsened with a lack of water, shelter and sanitation.

Anne and Margot Frank are thought to have died in February 1945 from typhus which ravaged the camp. They were among 35,000 who perished in the months leading up to liberation.

In the weeks that followed 14,000 people died as a result of ill-treatment or sickness and the British burned the camp to stop the spread of disease.