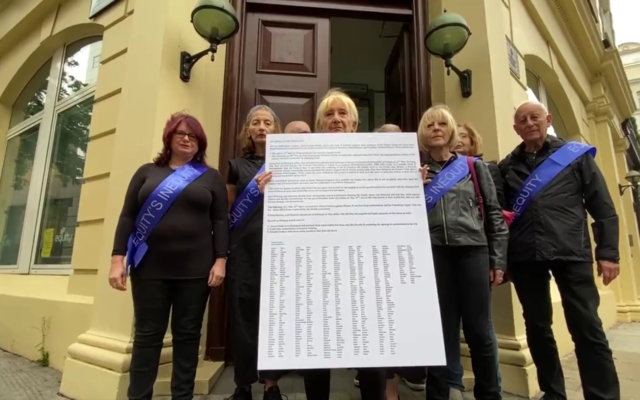 Protestors outside the union's HQ yesterday

A group of demonstrators staged a protest outside the headquarters of Equity, an actors’ union, yesterday, alleging Jewish members feel unsafe in the union.

The group, which claimed to represent 300 theatre-goers, mailed an open letter to the union’s boss, Paul Fleming, and its president Maureen Beattie calling for action against its “marginalising of their Jewish membership” and its stance on Israel-Palestine.

The union caused controversy when it urged its members to take part in a central London pro-Palestinian demo in May, where antisemitic slogans were seen on display.

One of those behind yesterday’s protest, Judith Ornstein, said: “I’m pro-Palestinian, but Paul Fleming called to attend these rallies, which had all been marked by antisemitism, only a few days after those cars went through north west London calling for Jewish women to be raped.

“It struck me as very clumsy. Equity has a ‘safe space’ policy, but they left their Jewish members in a very unsafe space.

“It’s not an apology I’d want – theatre goers want to see evidence that he’s building bridges with his Jewish members.

“Own it as clumsy, as one-sided, we’d want to see proper evidence that action is being taken.”

The union bosses issued a statement in May, saying that “antisemitism must be rooted out and denounced” and that the union condemned violence against Israeli and Palestinian civilians.

The open letter, which was also delivered to the Society of Theatres, calls on the union’s senior leaders to take antisemitism awareness training, and to say that their intervention was “ill-judged.”

A number of high-profile members of the union, including actress Maureen Lipman, resigned in the wake of the row. At the time, Lipman said the union didn’t speak for her, or “any actor in the union with a brain.”