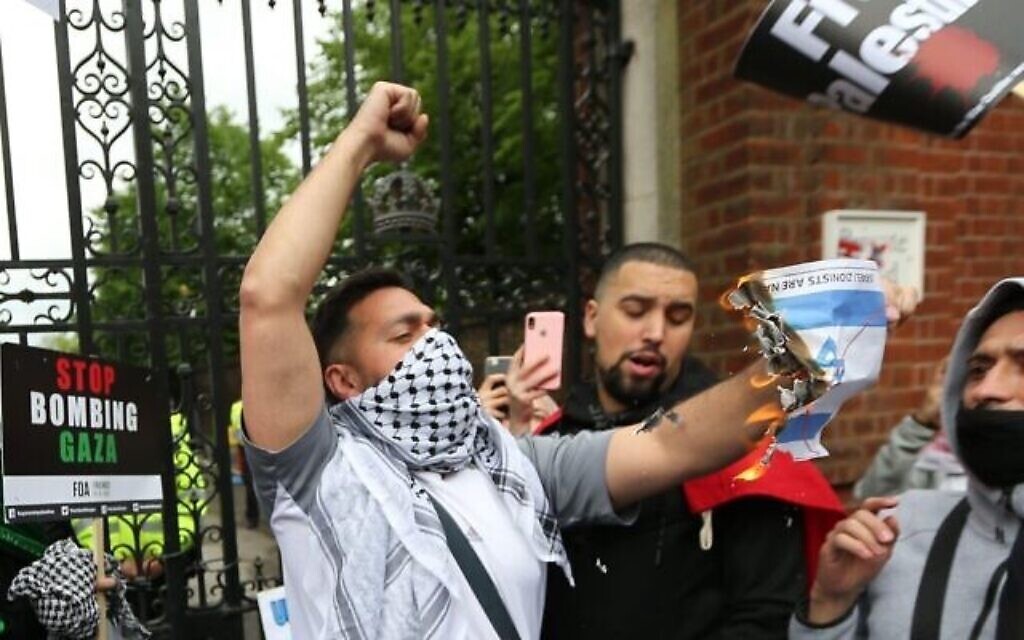 2FNAN1R London, England, UK. 15th May, 2021. Protesters outside the Embassy of Israel in London. Tens of thousands of protesters marched to the embassy form Hyde Park in solidarity with Palestinians as Israeli attacks on Gaza continues. Credit: Tayfun Salci/ZUMA Wire/Alamy Live News

Just before the ceasefire was announced, a wise community member told me: “Things often return quite quickly to the status quo… the status quo being the worst possible end to this awful mess.”

With lives needlessly lost and society even more broken, we cannot go backwards. The only positive that can come out of the fear and tragic experiences of the past two weeks is if they force us to move forward in
a positive way.

Not just in Israel and Gaza but here in the UK, where we saw such an ugly by-product of the violence there.

A teacher spat on as she walks down the corridor with the pupils jibing that they’re going to burn the Israeli flag. A man whose Instagram account usually only promotes fast cars suddenly feels the need to share his expertise on Middle East politics.

Abuse gets hurled from cars bearing Palestinian flags. This list of how the violence in Israel and Gaza makes the British public take sides seems endless. Each seeing perpetrator and victim, right and wrong.

When there is relative calm in Israel, we are merely seen as Jewish. When there is unrest, we Jews are all seen as representatives of the Israeli government.

I don’t get to influence Israeli government, not even with a single vote, yet so many people who know me as Jewish assume they know how I feel.

I feel huge anxiety when I see rockets are being launched into Israel, yet feel no ounce of victory when I see rubble and lost lives in Gaza.

How can the teacher and the student talk about Israel and Palestine during calm, so that they have context and conversations to fall back on at times
like this?

How can social media influencers help Palestinians to create a stable and supportive government who will represent their own wishes for coexistence and free them of Hamas’ terrorist leadership tactics?

Last but not least, how can Muslims and Jews around the world find avenues for conversation at times of the ghastly status quo, so that in times of war our flags do not become weaponised?