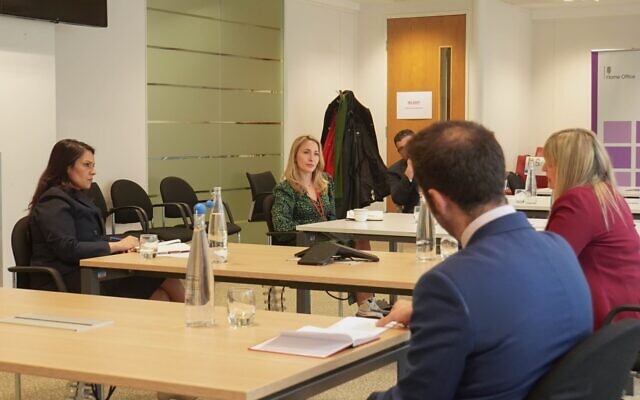 Home Secretary Priti Patel has been urged to ensure that British Jews living outside the main communal hubs are adequately protected by police.

At a meeting with Jewish communal leaders on Thursday, Patel responded positively to a request by communal leaders for Police and Crime Commissioners across the UK to be reminded of their duty to ensure hate laws were vigorously enforced locally.

Jewish News understands that representatives from the Community Security Trust, Jewish Leadership Council and Lord Mann, the government’s antisemitism adviser, were keen to raise security issues around vulnerable members of the community outside the main Jewish communities.

Prime Minister Boris Johnson also gave assurances that British Jews living away from major regions would be properly protected at a meeting with communal leaders on Wednesday.

A source told Jewish News: “Both the PM and the Home Secretary get it.

“They responded well to the reminder that not all of Britain’s Jews live in London and Manchester.”

There are concerns that UK Jews, some of whom live in regions with little or no community, have become targets of pro-Palestinian activists targeting them over the conflict between Israel and the Palestinians.

Police and crime commissioners (PCCs) are elected to oversee how crime is tackled in each police force area across the country.

Among matters discussed were the abuse of Jewish residents by a convoy of cars bearing Palestinian flags; videos seeming to show police officers publicly siding with anti-Israeli protestors and concerns over individuals and groups fanning the flames of the conflict.

During the meeting, Jewish representatives called for the proscription of Hamas in its entirety as a terrorist organisation in the UK, as currently only the so-called military wing is proscribed.

Board of Deputies President Marie van der Zyl thanked Priti Patel for setting up the meeting at short notice and also for her strong support for the Jewish community over these recent difficult days.

On Friday, the Home Secretary and Communities Secretary Robert Jenrick were photographed having breakfast out Daniels bakery in Temple Fortune, along with local senior police officers.​