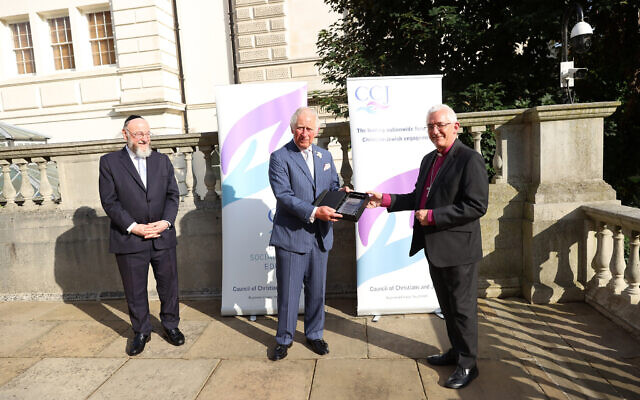 Prince Charles has been presented with a prestigious interfaith award recognising his efforts building bridges between communities.

The heir to the throne received the Council of Christians and Jews’ (CCJ) Bridge Award at Spencer House in central London, at a ceremony attended by Chief Rabbi Ephraim Mirvis. It was announced in 2020 but the presentation was delayed due the pandemic.

The award was introduced in 2017 to mark CCJ’s 75th anniversary, recognising individuals who have made an “exceptional and leading contribution to building bridges between peoples”.

Addressing the ceremony, HRH Prince Charles said he was “most touched and honoured” to have received the gong, adding CCJ had “taken me by surprise and I can’t tell you how flattered I am.

“It is extraordinary to think I was here only eighteen months ago to present the Award to Lord Rothschild, and little did I think I would be summoned back to Spencer House to be given the award myself.”

Paying tribute, Prince Charles said he was “enormously grateful to Lord Rothschild” for his congratulatory message. 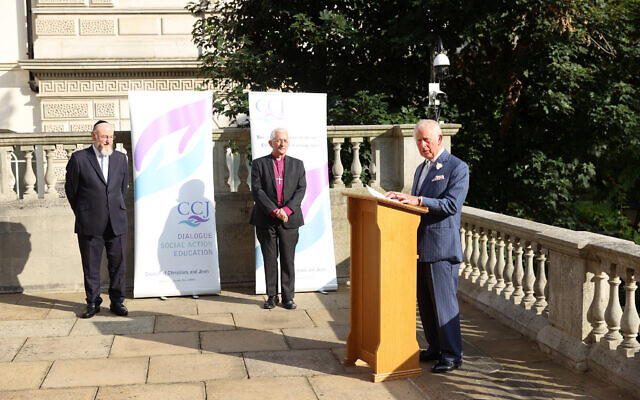 Praising CCJ as it marks its 80th anniversary, Prince Charles said the “essence of its mission has never been more relevant than it is today. We must not forget that it was founded in 1942, at the height of the Holocaust, by Chief Rabbi Hertz and Archbishop Temple in order to support Jewish refugees from Europe and combat antisemitism, and to build a bridge between Jewish and Christian communities at the most dire moment in their long, often troubled relationship.

“This noble mission and this widely held vision about what is right are now challenged by the vicious distortions of history which attempt to diminish or deny the Jewish experience of antisemitism over the millennia, but particularly the Holocaust.”

Reflecting on his time in the Holy Land in January 2020, where he “witnessed some of the tensions between Israel and the Occupied Territories and heard the different narratives and understood afresh, I think, the importance of learning conflict resolution skills to facilitate improved dialogue around the most complex issues. It is one of the reasons that I am so deeply moved to have been given this Award by you this evening.

Rt Revd Michael Ipgrave, Chair of CCJ and Bishop of Lichfield said: “We are delighted to present our Bridge award to The Prince. Since 1942, CCJ has been building bridges between peoples and communities. In a similar vein, His Royal Highness has been a bridge builder extraordinaire, supporting diverse faith and ethnic communities over several decades.  He has been a steadfast friend of all the faith communities, reflecting the duality of the monarchy’s role as Supreme Governor of the Church of England but also at the helm of a multi-faith country and Commonwealth. To borrow the words of the famous American Jewish folk duo Simon & Garfunkel, The Prince has been a Bridge over Troubled Water.” 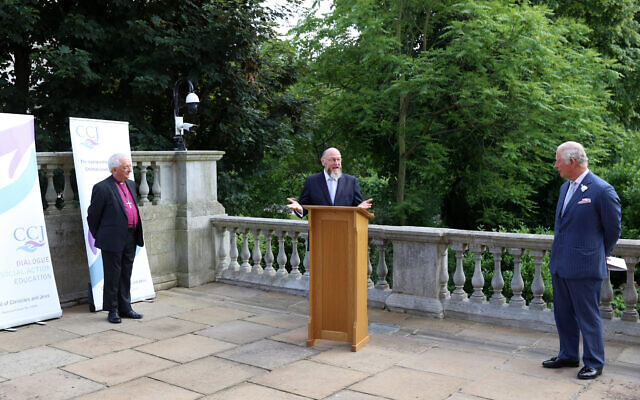 Zaki Cooper, CCJ Trustee and Founder of the Bridge Award said: “The task of building bridges remains as necessary as ever, as an antidote to polarisation, division and ignorance. The Prince has been a long-standing champion of this important work between different religious groups, and also as a particularly steadfast friend to minority faith and ethnic groups. Whilst diversity and inclusion has become a buzzword recently, The Prince has been championing this agenda over many years, out of a sense of humanity and the common good. He not only has an acute understanding of the value of faith in theory but is also a friend of all the faiths in practice.”

The award has previously been won by the Smith family for their Holocaust education work, the late Rabbi Lord Jonathan Sacks, and Lord Jacob Rothschild.