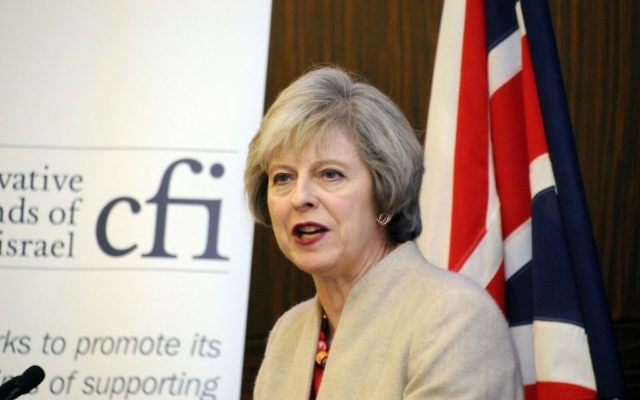 Prime Minister Theresa May has accused Labour of “turning a blind eye” to anti-Semitism, as she announced new measures to “call out” perpetrators of hatred against Jewish people.

Speaking at a private lunch of the Conservative Friends of Israel in London, Mrs May announced the UK is adopting an international formal definition of anti-Semitism as part of its efforts to eradicate the prejudice.

And she said it was “disgusting” that anti-Semitic views were found in British politics, making clear to her audience that she believed this happened mainly within “the Labour Party and their hard-left allies”.

Labour has backed the Government’s adoption of the International Holocaust Remembrance Alliance (IHRA) definition of anti-Semitism, and a spokesman for Jeremy Corbyn said the party believed that “language or behaviour that displays hatred towards Jews is anti-Semitism, and is as repugnant and unacceptable as any other form of racism”.

But Mrs May said it was the Conservatives who were taking “the firmest stand” against anti-Semitism.

“Let me be clear: it is unacceptable that there is anti-Semitism in this country,” she said. “It is even worse that incidents are reportedly on the rise.

“And it is disgusting that these twisted views are being found in British politics. Of course, I am talking mainly about the Labour Party and their hard-left allies.”

Labour’s deputy leader Tom Watson made a declaration of support for Israel by singing the anthem Am Yisrael Chai – The People of Israel Live – at a Westminster lunch last month.

But Mrs May said: “No amount of karaoke can make up for turning a blind eye to anti-Semitism.

“No matter what Labour say – or sing – they cannot ignore what has been happening in their party.”

Her comments are the latest in a series of accusations that the Labour Party has failed to tackle anti-Semitism within its ranks.

A report into the claims by the former director of civil liberties organisation Liberty, Shami Chakrabarti, was denounced as a ”whitewash” by Jewish groups, and there was further controversy when she was made a life peer by Mr Corbyn.

The Government is set to publish its response to a Home Affairs Select Committee inquiry into anti-Semitism. The report was described as biased by Mr Corbyn after it found he had failed to provide ”consistent leadership” in tackling the problem within his party.

In a comment released before Mrs May’s speech, a spokesman for the Labour leader said: “Jeremy has consistently spoken out against all forms of anti-Semitism and condemned all anti-Semitic abuse, and set up the Chakrabarti inquiry into anti-Semitism and other forms of racism.

“Its recommendations have already led to far-reaching changes to the rules and practice of the Labour Party. He has also taken decisive disciplinary action over allegations of anti-Semitism, including a series of suspensions and exclusions from membership.”

In May this year the IHRA – an intergovernmental organisation backed by 31 countries – agreed a definition of anti-Semitism it hopes will become widely adopted globally.

It states: “Anti-Semitism is a certain perception of Jews, which may be expressed as hatred toward Jews. Rhetorical and physical manifestations of anti-Semitism are directed toward Jewish or non-Jewish individuals and/or their property, toward Jewish community institutions and religious facilities.”

Police already use a version of the definition but it will now be used by councils, universities and other public bodies.

Mrs May said its adoption in the UK “means there will be one definition of anti-Semitism – in essence, language or behaviour that displays hatred towards Jews because they are Jews – and anyone guilty of that will be called out on it”.

The move was saluted by Chief Rabbi Ephraim Mirvis, who said he hoped it would “provide a clarity which will herald a far more effective discourse on the ways that we can highlight and challenge anti-Semitism wherever it is found”.

He added: “I would also like to welcome the Labour Party’s support for the definition and call upon other political parties and organisations worldwide to do likewise.”

The chief executive of the Holocaust Educational Trust, Karen Pollock, said: “This definition will leave people in no doubt when a line has been crossed – a crucial step in the fight against anti-Semitism.”

Mrs May said that the UK regarded Israel as a “crucial” partner in its future outside the European Union, and would mark “with pride” the centenary of the 1917 Balfour Declaration of British support for a national home for the Jewish people.

She restated UK support for a two-state solution to the conflict between Israelis and Palestinians and warned that the construction of illegal settlements on Palestinian land was “wrong (and) not conducive to peace and it must stop”.

But she hailed Israel as “a thriving democracy, a beacon of tolerance, an engine of enterprise and an example to the rest of the world for overcoming adversity and defying disadvantages”.

And she denounced the BDS campaign for boycott, divestment and sanctions against Israel as “wrong (and) unacceptable”, adding: “This Government will have no truck with those who subscribe to it. Our focus is the opposite – on taking our trading and investing relationship with Israel to the next level.”