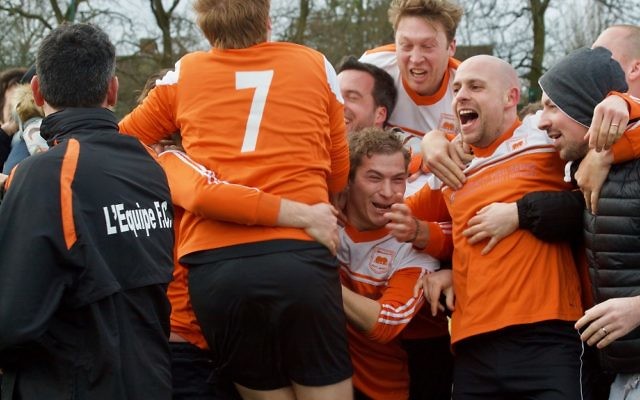 L’Equipe player-manager Nick Stern said he felt a mixture of pride and shock after he saw his side crowned Division Two champions.

Celebrating their ten-year anniversary, yesterday’s 6-1 win over Faithfold also signalled the club’s first ever trophy. Reflecting back on achieving their first piece of silverware, Stern said: “Proud is the best word to describe how I’m feeling this morning. It truly was a whole squad effort but in fact shock also might be a good word here. It’s our tenth year, we got on a roll early and it never stopped. This club means so much to a lot of people and having started it ten years ago, to win our first trophy in this anniversary year really means so much to everyone.”

Having pinpointed a league title win at the start of the season, he said: “We’ve been saying that for the last five years! However, there were a few crucial moments throughout the season when we thought this could be the year. Get two huge draws away at Temple Fortune and Redbridge with depleted squads was critical, John Kay’s last minute win at Hertswood Vale and then finally beating Real Hendon last week when we had our smallest squad without most of our ‘first team’ proved to me what a squad we were, but also it was our time. However it wasn’t until we were 5-0 up yesterday that I dared to relax and appreciate that we are champions!”

Feeling they undoubtedly deserved to win the title, as the statistics suggest, he says: “Fourteen wins out of 16, we have the best goal scoring record in any division and one of the best defences, I would say the title was pretty well earned.”

Sunday’s win came thanks to two goals each from Andy Smith and Mark Smith, coupled with two own goals, Richard Fogelman’s late penalty proving to be scant consolation for the Greens.

Pleased with their performance, given what was at stake, Stern said: “For the first time this season, we decided to embrace our position and not shy away from the fact that we knew we were just one win away from the title.

“We knew we had to have the right attitude and mentality and despite it being the biggest game many of us had played, in we knew that if we showed what we have showed all season then we will be ok. It turned out I had nothing to worry about. It was one of our best performances of the season and under that pressure it’s pretty special. We were first to every challenge, won every header, tackle and capped it off with some brilliant football. I couldn’t be prouder of how we handled everything.”

The only challenge left for them this season is to try and not lose their remaining four games, though Stern isn’t too concerned about becoming the latest set of ‘invincibles’. “We’re going to enjoy this {winning the title] and if we go unbeaten it will be great, but this year was about a trophy and winning the league is the most important thing.”

And looking to enjoy this success, before looking ahead to next season, he added: “Let’s enjoy this year first and we will deal will next year after the summer!”