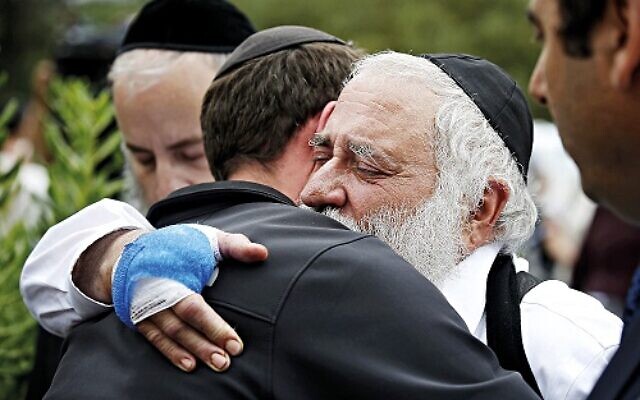 Rabbi Yisroel hugs a member of the congregation of Chabad of Poway the day after a deadly shooting took place there, on Sunday, April 28, 2019 in Poway, Calif. (Credit Image: © TNS via ZUMA Wire)

The man who opened fire on a synagogue in Poway, California in 2019, killing one and injuring three, has pleaded guilty to a 113-count federal hate crime indictment.

The guilty plea comes with a recommended sentence of life in prison plus 30 years. The charges the shooter faced, which also relate to his arson of a mosque a month earlier, carried a maximum sentence of the death penalty.

“The defendant entered a synagogue with the intent to kill all those inside because of his hatred for Jewish people, and days earlier used fire in an attempt to destroy another sacred house of worship because of his hatred for Muslims,” said Deputy Attorney General Lisa Monaco in a statement Monday. “There is no place in American society for this type of hate-fueled violence.”

On April 27, 2019, the final day of Passover, John Earnest, a white supremacist, walked into the Chabad synagogue in Poway, California, near San Diego, and began shooting at worshippers. The attack occurred six months to the day after the Tree of Life synagogue shooting in Pittsburgh, which killed 11 Jews at prayer.

Earnest killed one woman, Lori Gilbert Kaye, and injured three others, including Rabbi Yisroel Goldstein and a child. In a manifesto, he mentioned the shootings at mosques in Christchurch, New Zealand six weeks earlier.

“This nation stands with Lori Gilbert Kaye’s family and the survivors of these unspeakable acts of terror,” said Acting U.S. Attorney Randy S. Grossman in a statement. “We emphatically reject the defendant’s hate, racism and prejudice, and we hope the conclusion of this case brings some measure of comfort to all those affected by his heinous crimes.”