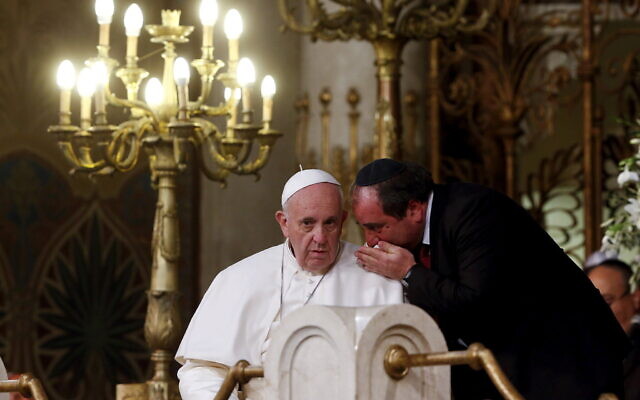 Pope Francis listens to a member of the Jewish community during a visit to Rome's Great Synagogue in 2016 (Photo: Reuters)

Pope Francis has sought to reconcile with Israel’s chief rabbinate after suggesting last month that he believed Judaism’s body of law, the Torah, was obsolete.

The pontiff said during an audience on August 11 that the Torah “does not give life”, prompting a stern letter to the Vatican from Israel’s chief rabbinate.

He went on: “It does not offer the fulfilment of the promise because it is not capable of being able to fulfil it.

“Those who seek life need to look to the promise and to its fulfilment in Christ.”

His remarks provoked a stern letter from Israel’s chief rabbinate to the Vatican asking to “convey our distress to Pope Francis” and calling on him to “ensure that any derogatory conclusions drawn from this homily are clearly repudiated”.

The Torah, the first five books of the Hebrew Bible, contains hundreds of commandments for Jews to follow in everyday life. They are interpreted differently by Orthodox and progressive Jews.

Francis has since asked an aide to write a letter explaining he was reflecting on the writings of St Paul and had not intended his remarks to be taken as a judgment on Jewish law.

Jewish sources told the Reuters news agency that they saw the Vatican’s letter as a “sign of reconciliation”.

At his weekly blessing on Sunday, Francis offered best wishes to Jews ahead of Rosh Hashanah and added: “May the new year be rich with fruits of peace, and good for those who walk faithfully in the law of the Lord”.

The pope’s use of the word “law” is believed to be a significant and intentional move to clear up what the Vatican considers a misunderstanding.

Relations between Jews and Catholics shifted radically since 1965, when the Second Vatican Council abandoned the view that Jews are collectively responsible for the death of Jesus.

The most recent three popes, including Francis, have paid visits to synagogues and have maintained close relations with Jews.