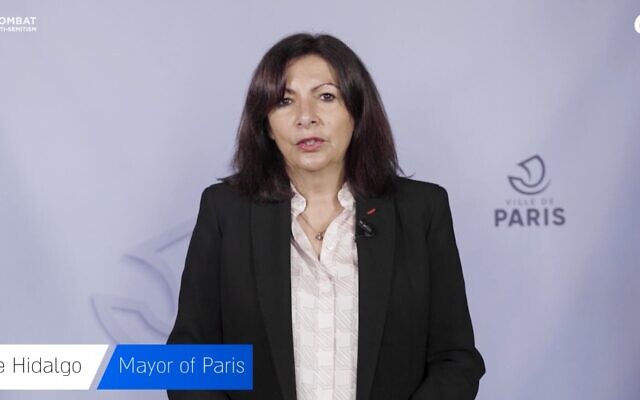 Anne Hidalgo, mayor of Paris, was among the speakers at the event (Photo: Crif)

The Board of Deputies’ Marie van der Zyl joined politicians, academics and officials for a digital rally demanding justice for Sarah Halimi, the French Jewish grandmother whose killer will not stand trial.

Her case generated global outrage after France’s highest court ruled last month that Kobili Traore was not criminally responsible for the 65-year-old’s death because he had succumbed to a “delirious fit” after smoking cannabis.

Halimi died four years ago after Traore attacked her in her Paris flat while shouting “Allahu Akbar”.

He later pushed her out of the window of her Paris flat onto the street below.

It was organised by Crif, the French Jewish community organisation, and the Combat Antisemitism Movement (CAM).

“We should never, ever forget Sarah Halimi. This [court’s] decision hurts me, hurts us – citizens of the French Republic. It’s truly a judicial and moral catastrophe,” Valls told the event.

Herzog said it was vital that the international community remained proactive in the fight against hatred, while Hidalgo promised to name a street in Paris after Halimi.

Van der Zyl asid: “As Jews, we have all got an emotive and powerful shared history. Our experiences day to day might not always be the same, but we all know that there is one dark force that we are all too familiar with and that is the fight against antisemitism.”

After thousands took part in rallies around the world, France’s justice minister announced plans to revise the so-called “cannabis loophole” that found Traore was not responsible for his actions.

Eric Dupond-Moretti said the government would present a bill to “fill the legal vacuum” by the end of May.