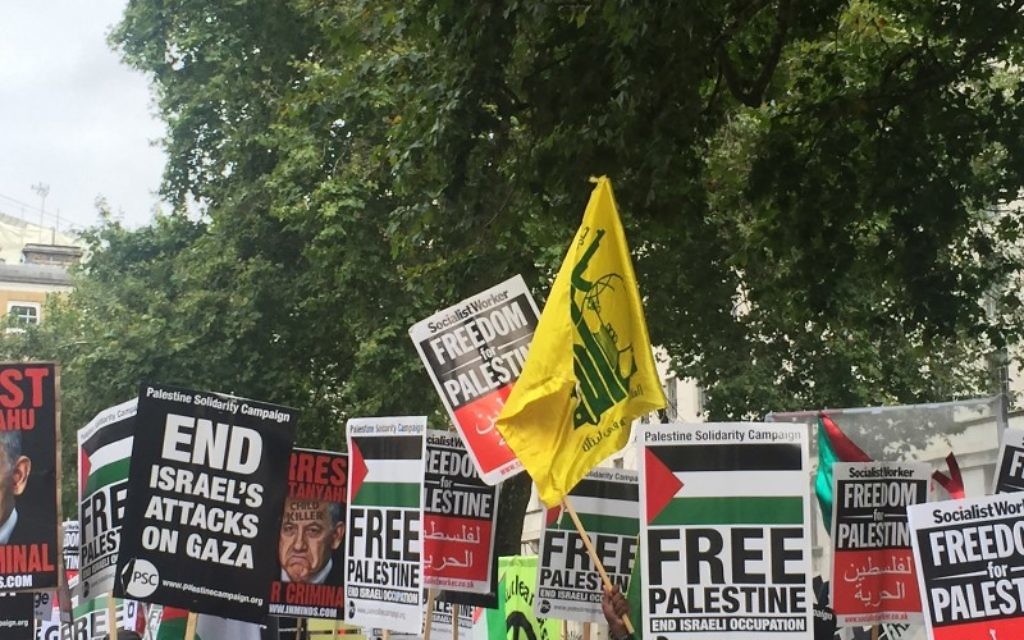 The yellow Hezbollah flag was flown during the demonstration in Whitehall

The Jewish community this week praised the weekend arrest of two pro-Palestinian protesters for flying a Hezbollah flag in central London, as police finally confirmed that to do so was illegal.

There had been confusion earlier this month when the Metropolitan Police said flying the flags of groups such as Hezbollah was not against the law because they were also political parties.

In response to concerns raised by Hendon MP Matthew Offord, Assistant Commissioner Patricia Gallen penned a written reply on 6 October, saying: “As the flag represents both Hezbollah’s political party and the proscribed terrorist group, displaying it in these circumstances alone does not constitute an offence under Terrorism Legislation.”

A protester draped in a Hezbollah flag

But on Wednesday the force finally confirmed that while the two men were initially arrested on suspicion of breach of the peace, they were later “further arrested for offenses under Section 13 of the Terrorism Act 2000”.

This makes it illegal for someone to “display an article, such as a flag, in such a way or in such circumstances as to arouse reasonable suspicion that they are a member or supporter of a proscribed organisation”. Each case “depends on its own particular facts” but those found guilty can be imprisoned for up to six months.

A police spokesman said: “We recognise that activity and behavior like this can cause concerns within communities, and we are committed to disrupting and dealing with any groups or individuals who aim to cause harm or spread fear and hatred, no matter what their ideological or political motive.

“While holding extreme views is not in itself unlawful, those who seek to create division within our communities and whose protests cross over into unlawful intimidation, violence and public disorder will be dealt with robustly.”

CST director of communications Mark Gardner said: “We and our communal partners have long argued that the flying of Hezbollah flags should contravene anti-terror legislation, so we very much welcome this apparent development.”

Speaking to Jewish News at Emunah’s annual dinner on Tuesday night, Home Secretary Theresa May acknowledged the arrests in central London this weekend and sought to allay concerns, saying: “I have made it very clear to the police that they should take action when they see these kind of things.”

Offord wrote to both May and the Met highlighting community concerns about anti-Israel protesters waving the green flag of Hamas and the yellow flag of Hezbollah at rallies, including during Israeli Prime Minister Benjamin Netanyahu’s UK visit last month. Hamas and Hezbollah have armed wings proscribed as terrorist groups in the UK, but political wings which are not.

On Wednesday, the Palestine Solidarity Campaign said it actively discourages protesters from flying Hamas or Hezbollah flags. “We ask that those present respect the Palestinian national flag, and use only this flag,” a spokeswoman said.

Simon Johnson, chief executive of the Jewish Leadership Council, had earlier registered “grave concerns at the apparent impunity” of the flag-wavers, adding: “Whilst we welcome the news of arrests.”

A Board of Deputies spokesperson said: “It’s good they were arrested. We deplore the waving of flags indicating support for banned terrorist groups.”

Meanwhile Arieh Miller, director of the Zionist Federation, addressed concerns that some protesters were changing the appearance of flags slightly to get round the law, saying: “The assault rifle on the Hezbollah flag doesn’t suddenly become a moderate, peaceful assault rifle just because it’s representing a different section of the organisation.”