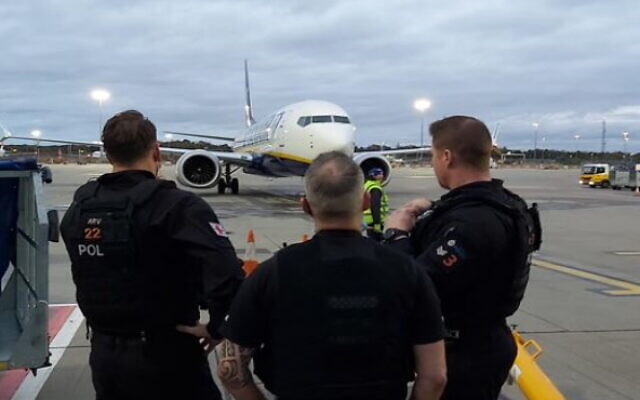 A third man has been arrested in connection with antisemitic chanting by West Ham fans, directed at an Orthodox Jewish passenger on a flight last week.

In the days after the incident, Essex Police announced the arrest of 55 and 26-year-old men in connection with the incident. Both were bailed.

This comes after a video emerged on social media last Thursday appearing to show some Hammers supporters on a Ryanair flight to Belgium singing an offensive song as a visibly man walked down the aisle to take his seat.

The fans on the flight were on their way to watch West Ham play Belgian side Genk in the Europa League.

In a statement issued on Monday, Essex Police confirmed: “A third man has been arrested in connection with our investigation into a video on social media of a man being subjected to harassment on board a flight from Stansted Airport last week.

“He has been arrested on suspicion of a public order offence and racially or religiously aggravated harassment. He is currently in custody. Two other men arrested have been released on bail until 1 December.”

Essex Police Chief Superintendent Tom Simons, who is leading the investigation said: “Essex Police will not tolerate racism or discrimination of any kind.

“Having been made aware of the incident this morning, officers worked quickly to secure an arrest at the earliest possible opportunity.”

The east London club were quick to condemn the chanting and vowed to work with both Ryanair and the police to help identify any fans involved. The club confirmed on Sunday it had banned two supporters.

After the incident, West Ham’s manager David Moyes joined his club in condemning the incident. “I don’t see our football club being like that. We are a diverse football club. There’s no room for discrimination anywhere,” he said.

Ryanair has so far not responded to a request for comment.

This is the moment the second man was arrested on Friday: