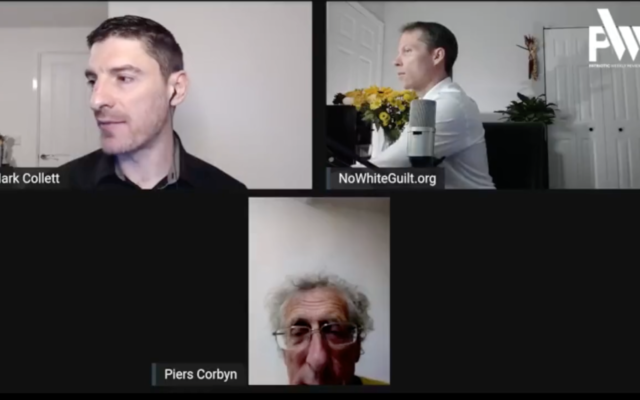 Anti-vaxx movement leader Corbyn responded by saying:  “There’s lots of ways of defining a Jewish question – the difficult is answering can lead you into certain dangers because you’ll say things …

“I’m not trying to get out of that, but I’m not convinced we’ve got time to elaborate at this particular point in time.

“If you come and see me under different circumstances we could discuss that more fully if the meaning of the question can be clarified a bit more.”

“Well the Holocaust happened and that was horrific. That’s all I can say on that.”

The ‘Jewish question’ was a debate that emerged in nineteenth and twentieth century European societies on alleged special problems and concerns with Jewish people.

The expression was used by antisemitic movements since the 1880s, and also controversially by Karl Marx.

It culminated in the Nazi phrase of the “Final Solution to the Jewish Question”.

It is not the first time that Corbyn has been linked with figures on the far-right.

In 2016 he gave a speech at an event in which he was welcomed by the disgraced academic Nicholas Kollerstrom, who was disowned by the University College London in 2008 for denying the Holocaust.

A proud fan of National Socialism he published a book in 2017 describing the “alleged extermination of six million Jews”, adding: “When it comes to the notion of white guilt, nothing is pushed more strongly.”

Hope Not Hate researcher Simon Murdoch has previously said: “Collett is a longstanding antisemite who has spoken sympathetically of Nazi Germany, described the Holocaust as the ‘alleged extermination of six million Jews’, and has regularly collaborated with David Duke, a former leader in the Ku Klux Klan.”

In 2019, the pro-Israel Israel Advocacy Group staged a live debate with Collett – but the stunt backfired after leader Joseph Cohen admitted the “ferocity of anti-Jewish racism expressed in the debate and by the audience was unlike anything we’ve experienced in over a decade.”

Mark asking Piers the "Jewish Question" is one of the most awkward things we've ever watched.