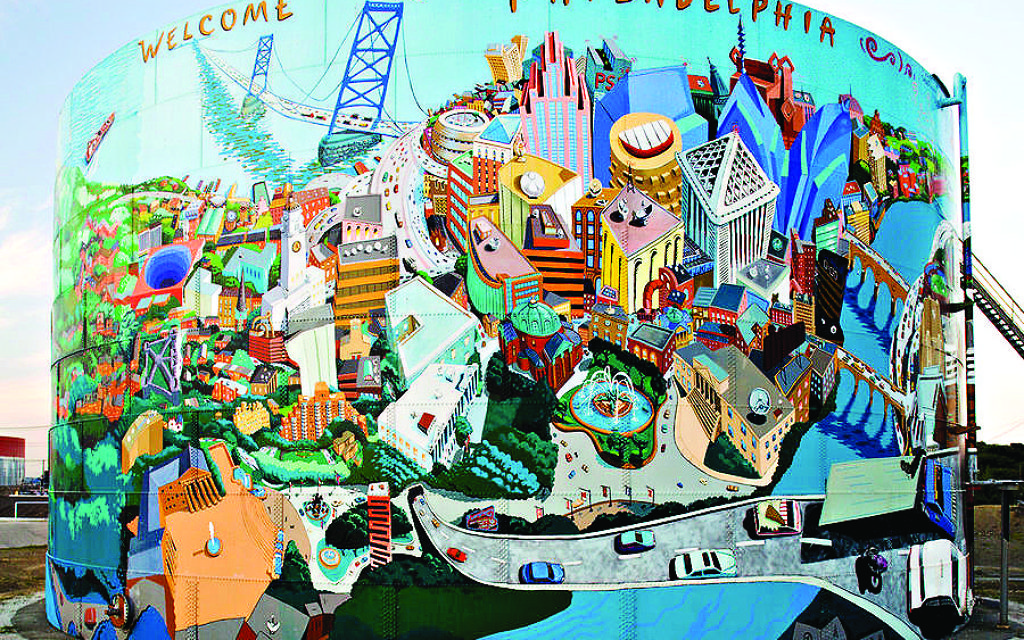 Once a blank wall, now a Philadelphian riot of colour

Lianne Kolirin takes a leisurely look around the birthplace of American independence, a city for foodies, art lovers, and one of the first places where Jews settled after they arrived on the continent in 1654.

What do Malcolm X, Mario Lanza and Larry Fine have in common? An assassinated civil rights leader, a famous tenor and one of The Three Stooges may have little to connect them, but in fact they are all linked to Philadelphia.

Lanza and Fine were both Philadelphians, while Malcolm X briefly put down roots there. Their association with Philly is commemorated in paint, as their faces adorn the walls of prominent buildings.

When it comes to public art, nowhere does it better than Philadelphia. With more than 3,600 murals, Pennsylvania’s largest city proudly claims to be the Mural Capital of the World.

Huge paintings have been springing up everywhere since 1984, when the authorities introduced the Mural Arts Program as a way to combat unsolicited graffiti. The scheme, which offered offenders a creative alternative to the criminal justice system, has been thriving ever since.

As a result, Philly is alive with colour and almost every blank wall is a potential canvas. What was once a problem is now an asset as the tourist board proudly offers walking, biking and trolley tours of the paintings.

Philadelphia has plenty of indoor masterpieces too. Not to be missed is the Barnes Foundation, home to 181 Renoirs, 69 Cézannes and 59 Matisses, along with works by Manet, Degas, Seurat, the American painter Prendergast, Titian and Picasso.

Once a blank wall, now a Philadelphian riot of colour

Besides its impressive collection of Renaissance, American, Impressionist and Modern artworks, the Philadelphia Museum of Art is famed for the 72 steps outside its entrance. Perhaps one of the world’s most famous staircases, this one appeared in the various Rocky movies and is a magnet for visiting selfie-takers.

But of course, Philly’s place in history was cemented long before Sylvester Stallone ever set foot here. Situated about halfway between New York City and Washington DC, this is the birthplace of American independence – which is why Philadelphia was named the first world heritage city in the United States earlier this month.

Any visit to this compact and walkable city must surely begin with a visit to its historic district, a cobble-stoned area housing the Liberty Bell, the National Constitution Centre and Independence Hall, where the Declaration of Independence and the US Constitution were both signed.

The iconic, though cracked, Liberty Bell, symbol of the city

Even before these developments, Philly was known for its welcoming nature. In 1681, England’s Charles II granted William Penn a charter for what would become the Pennsylvania colony. Despite this, Penn bought the land from the Lenape tribe to be on good terms with the native Americans and ensure peace for his colony. He named the city Philadelphia, meaning brotherly love in Greek.

With such religious tolerance it is no surprise a thriving Jewish community surfaced and it remains very much a part of the wonderful historic district.

In 1782, the congregation’s first house of worship was completed with financial assistance from Benjamin Franklin. The nearby cemetery contains the grave of Rebecca Gratz, who founded the first Jewish Sunday School and was reportedly the inspiration for Rebecca in Ivanhoe.

Home to world-class museums and America’s oldest continuously used synagogue, Philadelphia has something to offer all visitors

A short walk away is the Society Hill Synagogue, which began life as a Baptist church designed by one of early America’s foremost architects, Thomas U. Walter, who also drew the plans for the dome and House and Senate wings of the US Capitol.

Philadelphia is also home to some world-class museums, among them the phenomenal National Museum of American Jewish History. Situated on Independence Mall, the museum’s prominent location reflects the Jewish community’s importance in the history of the US. Just five years old, the core exhibition explores the challenges faced by Jews since their arrival on this continent in 1654, celebrating their experiences in every facet of American life and throughout every phase of the country’s history.

While the historical background is obviously fascinating, what sets the museum apart is its forward-thinking outlook. There is much that focuses on the present and the future, including an opportunity for visitors to record their own experiences in the clever “It’s Your Story” booths.

One Jewish Philadelphian who has really made a name for himself is Michael Solomonov. He runs a string of eateries in the city, including trendy Israeli restaurant Zahav, Abe Fisher which is “inspired by the cuisine of the Jewish diaspora” and Dizengoff, a casual hangout serving up prize-winning hummus.

Zahav, in the heart of Philly’s historic district, is the hot place to be seen, so be sure to book. Once there though, the wait is definitely worth it. Grab a seat with a view of the open kitchen, where chef Solomonov and his team perform their magic.

But don’t expect to find a traditional (but non-kosher) philly steak sandwich here. For this, it’s worth venturing up to Reading Terminal Market. Here you’ll find countless stands to sample the city’s most famous bite, as well as specialities from every corner of the globe.

Whether you plan to stay for a couple of days or more, it’s worth investing in a Philadelphia Pass, which gives you access to many of the city’s top attractions and sightseeing tours, as well as discounts in certain restaurants.

Philadelphia was recently ranked among the world’s top shopping destinations. So if the high-minded cultural tourism becomes too overwhelming, why not indulge in some retail therapy? Just be sure to bring an extra suitcase.