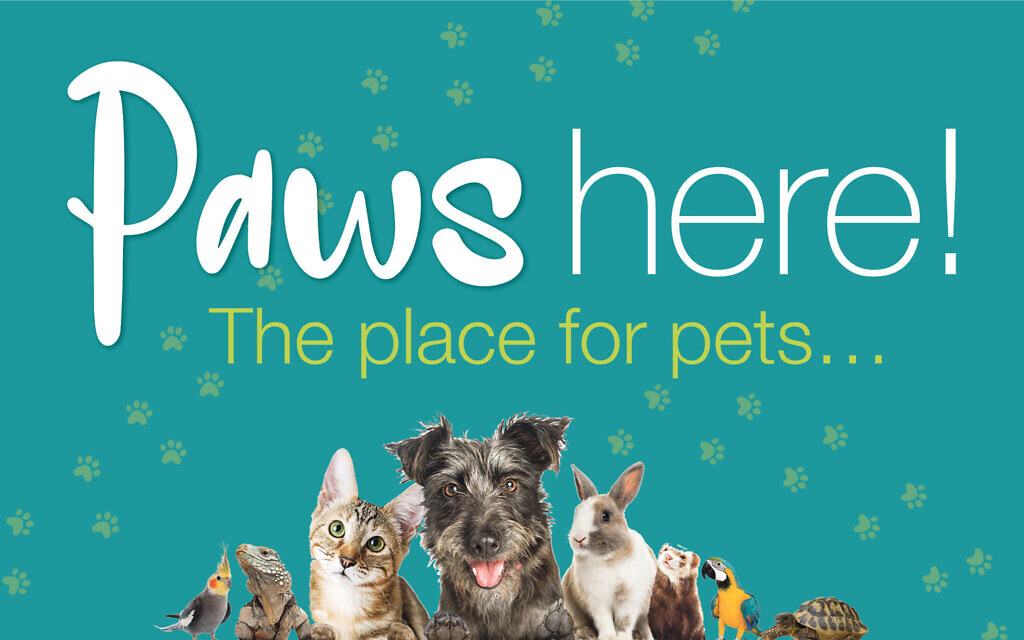 All rise. No, but seriously, RISE, as the puppy you reluctantly bought during that first lockdown needs a walk. Your Cavapoo (official mutt mascot of the Jewish community) is now fully-grown and requires even more exercise than it did during the long Covid summer of 2020. Bet you wish you’d  got a lazy French Bulldog like me. More suited to a long lunch than a long walk, I’m lucky enough to be owned by a legal eagle who feels the same – and who am I to argue?

He has enough ‘objections’ raised in court.

Lately, he who should be obeyed has been away, leaving me to languish on his bed while he does such amazing and worthy things as travelling to Jordan to observe the brilliant work of the Jordanian Red Crescent on a trek organised by Magen David Adom UK. 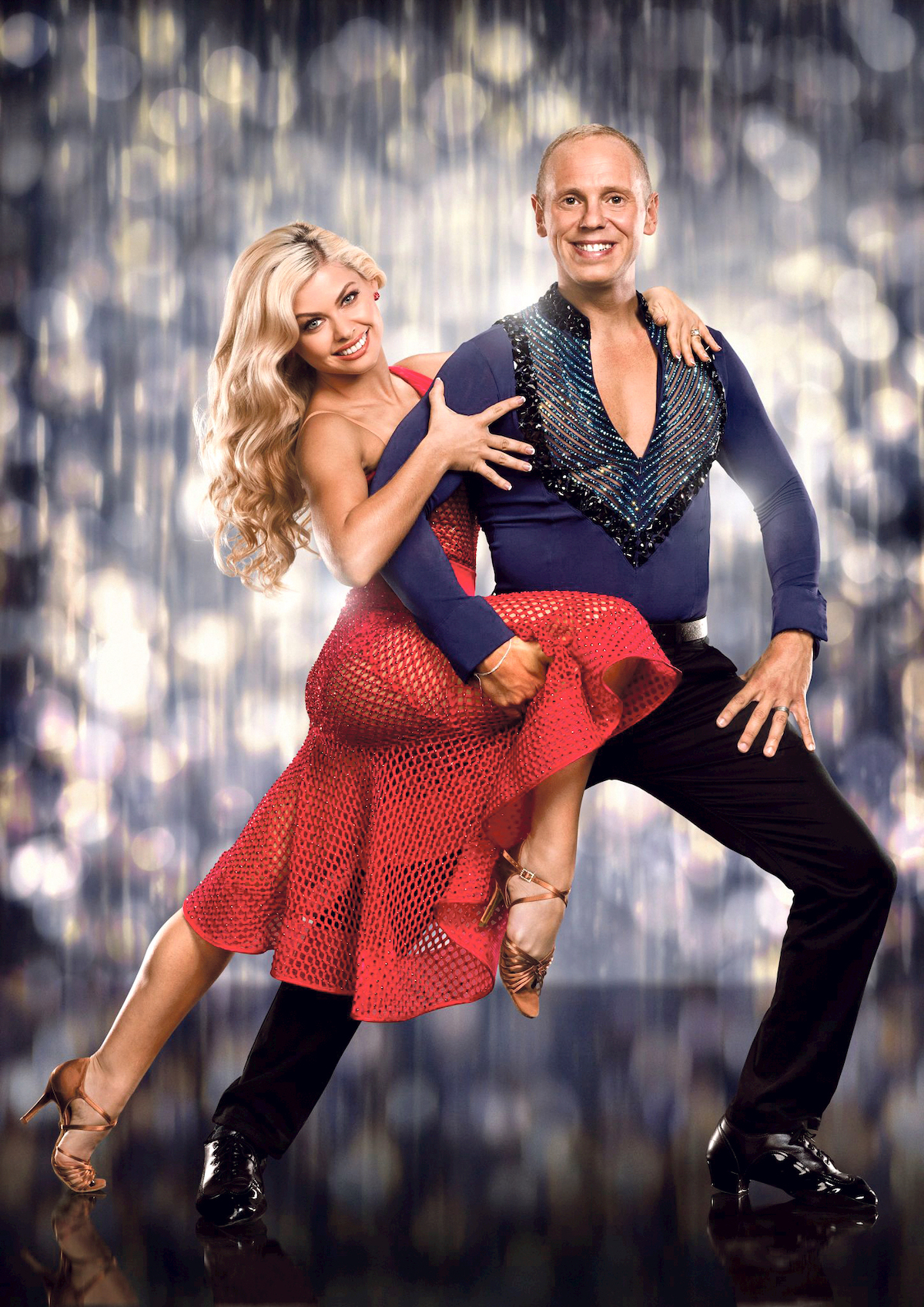 The judge takes his charity commitments very seriously and always gets a round of appaws from me for his efforts.

With that in mind, I would like to offer more appaws to the Israel Guide Dog Centre, as the charity marked its 30th anniversary by bringing blind runner Avi Solomon and his dog Nike to the UK for the London Marathon.

Together they raised £5,000, which is humbling for this hound, particularly as Avi had to stop at mile 20 of the race after being knocked over.

The charity secured its place in the marathon with the help of  the UK’s Guide Dogs for the Blind, and mutual respect in the world of canine philanthropy is definitely something to celebrate. 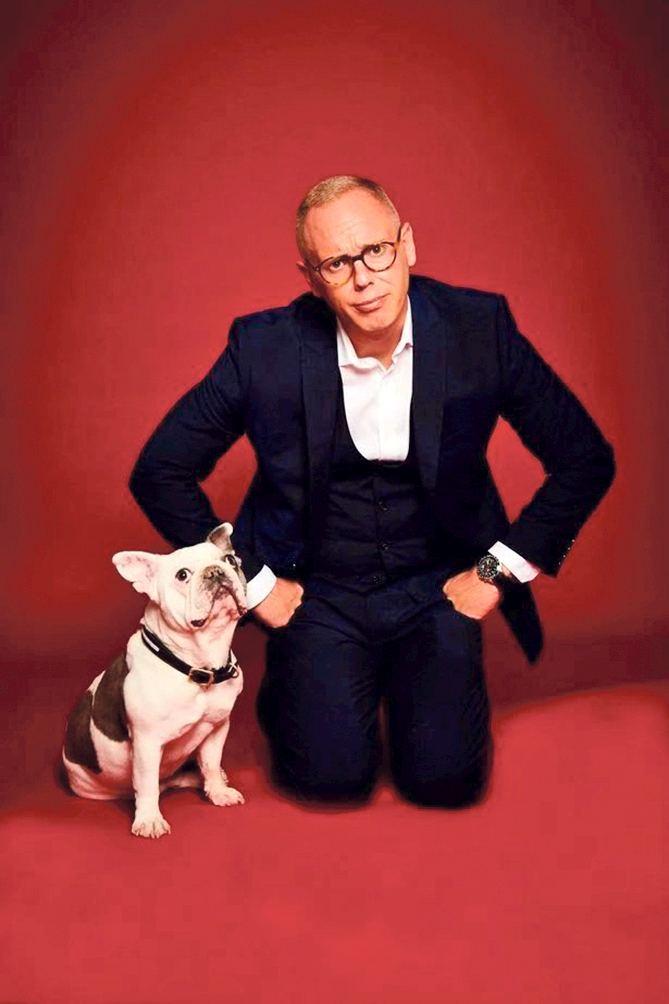 Rob and his dog!

While the boss was away, I also caught an episode of Strictly, which is a ‘bone’ of contention between us because he isn’t in this series.

The judge, as you’ll recall, can jive with the best of ’em, but Strictly got me musing about dog dancing stars such as Pudsey (olav ha-sholom), who won Britain’s Got Talent in 2012.

The Netflix show We Are the Champions about competitive dog dancing in America got me thinking about my Samba potential.

Just think about it of course, but if the boss is willing, we could team up for a Tango, and I can use my influence with Sophie and Charlie, Craig Revel Horwood’s two rescue King Charles Spaniels and we’ll have that garish trophy in the doggie bag.

Until next month, keep walking.

We asked you to send in pics of your animals in Jewish poses.

Here is Pretzel, a five-year-old short-haired British cat who can’t resist a Friday night dinner and loves every chag. 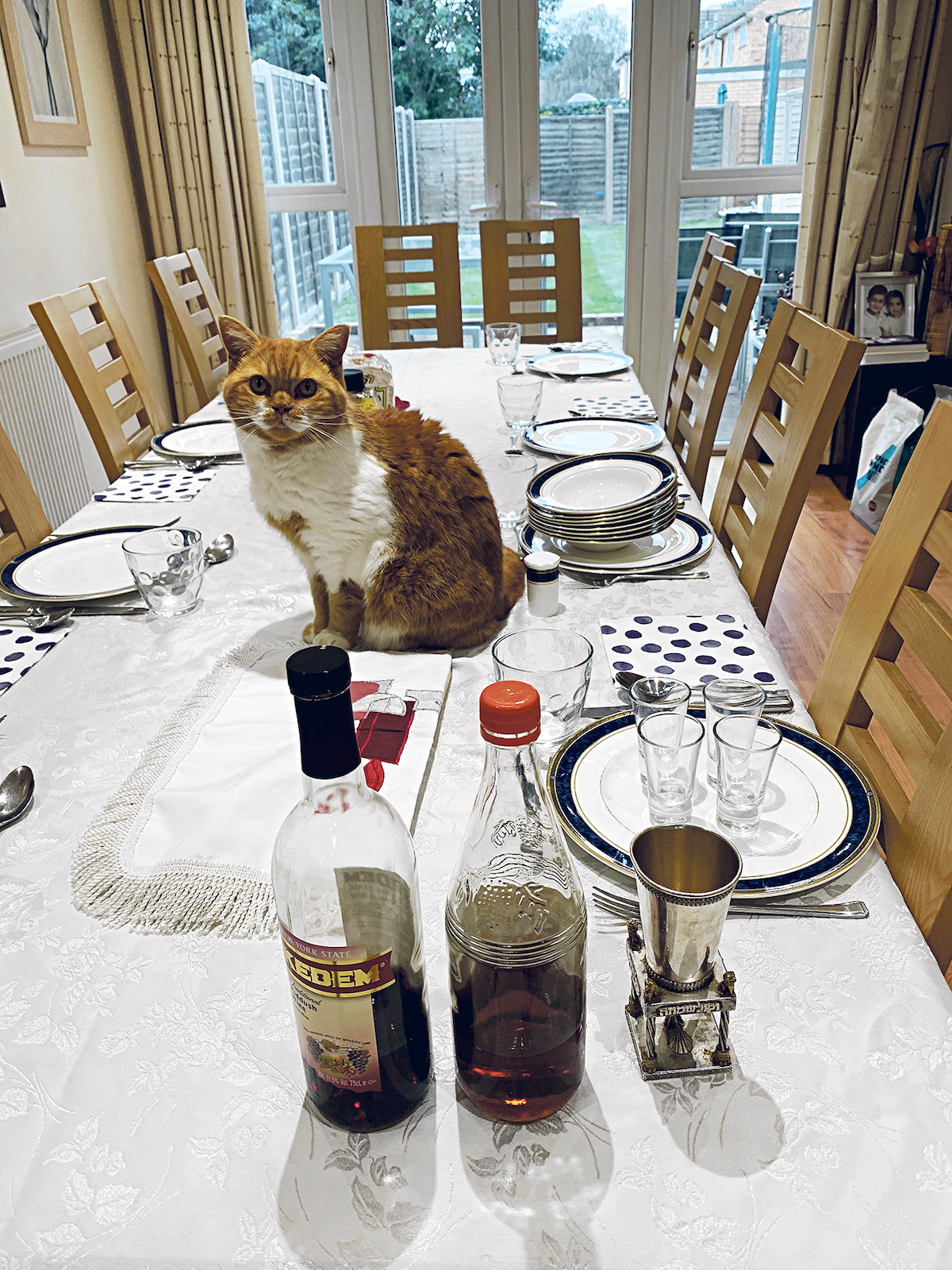 And this is Pom Bear, the Jewish Museum dog doing his Yiddish homework. Never far from the action, Pom Bear has become something of an exhibit despite mostly being in the back office. 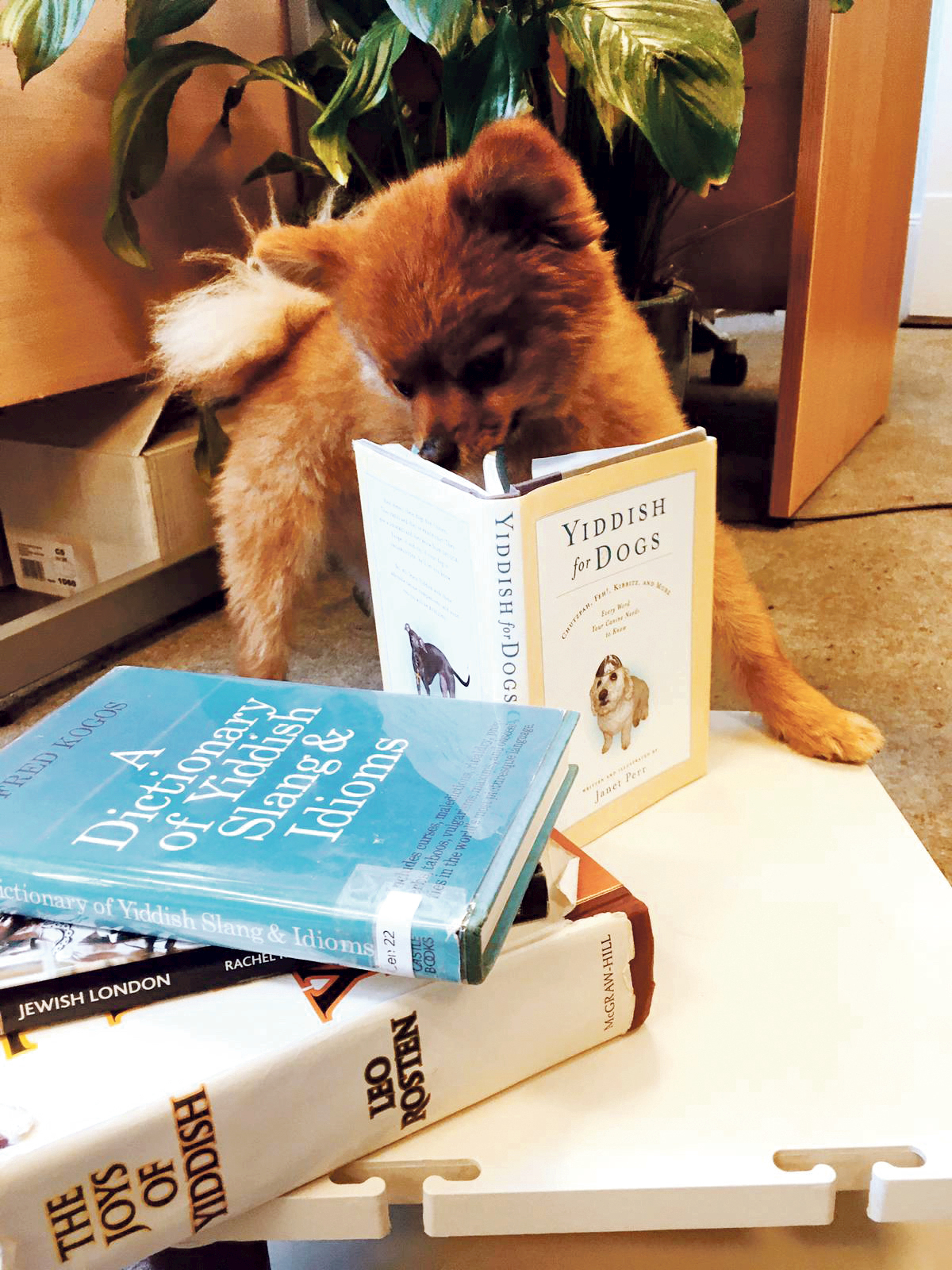 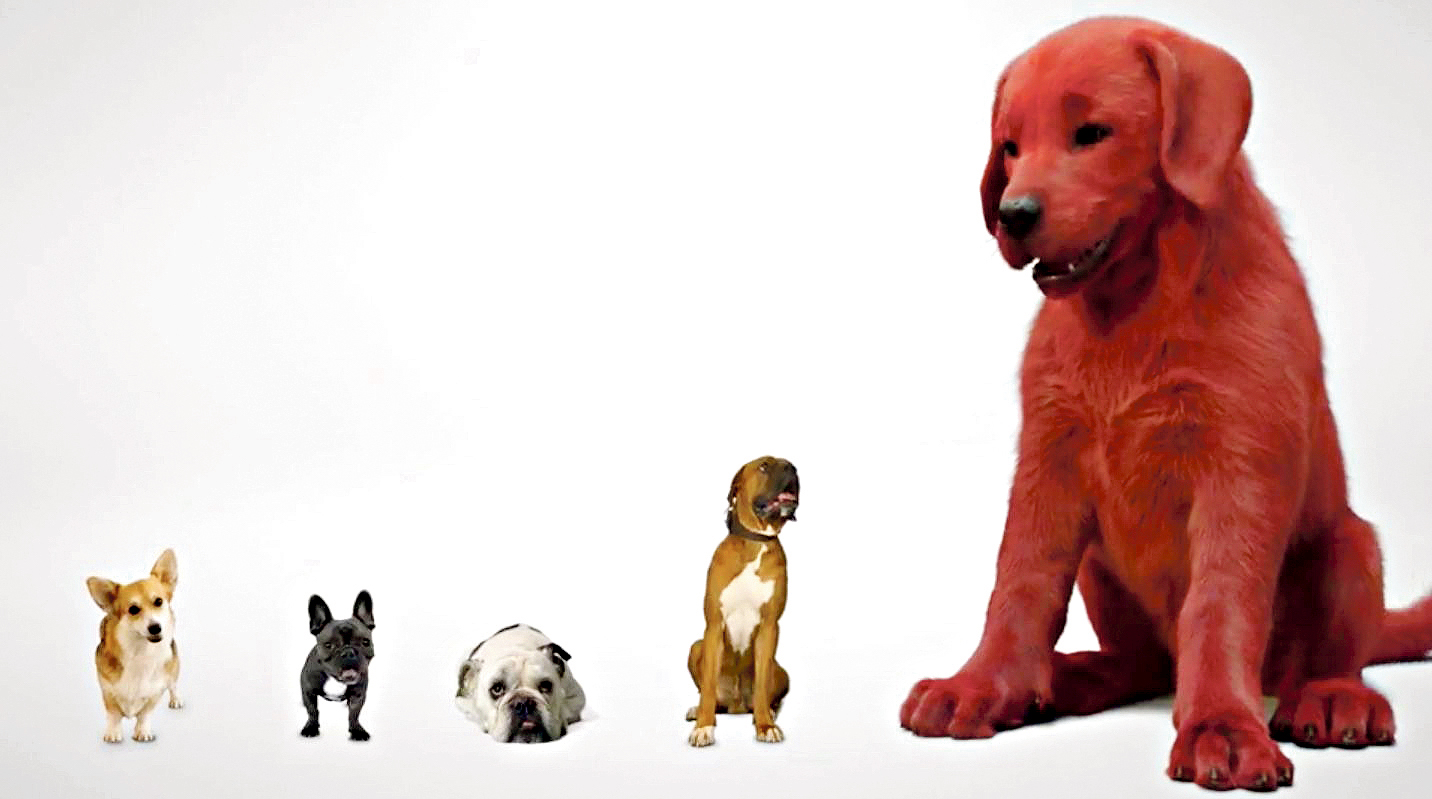 A young girl’s love for a tiny puppy makes the dog grow to an enormous size.

That’s the premise of the new film Clifford the Big Red Dog, which will certainly hit home with those who have fallen in love with the ranks of recently- acquired pups. In a Jewish home too much cholent  is usually the reason for growth.

Over to the vet 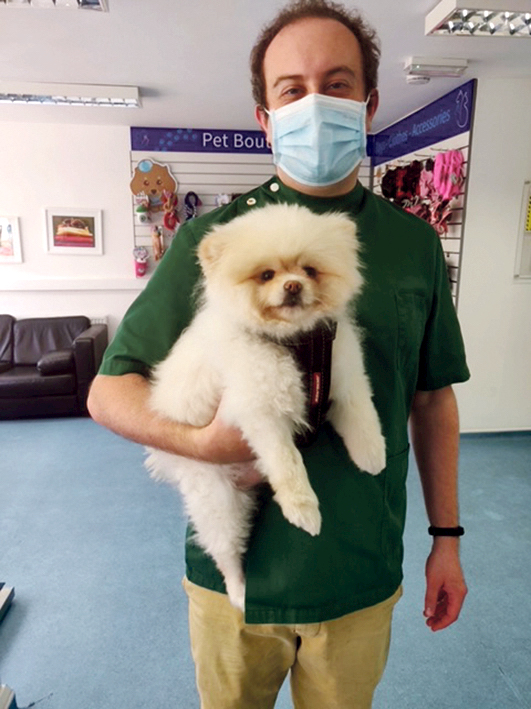 “This Halloween, use caution when placing chocolates and sweets by the door, as these can be dangerous for pets,” says Dr Andrew Monchar, clinical director at Two By Two Veterinary Centre.

“At this time of year, unfortunately, we admit a lot of pets who have eaten chocolates, raisins and grapes, which are all toxic. Remember to keep them out of reach and, if you notice any signs of restlessness, vomiting, diarrhoea, stomach pain or reluctance to eat, contact a vet quickly.”

Dr Monchar has to consider animal life carefully at this time of year. “As the clocks go back, your dog’s late afternoon walk can soon turn to dusk with the nights drawing in, so remember to put a reflective collar on them.”

As luck would have it, Two By Two Veterinary Centre’s in-store pet boutique in Finchley sells the latest fashions in leads, collars and harnesses suitable for the outdoors, which can be tried on in-store. They also stock the delightful designer range Puppia, which includes cat collars and fun pet toys, and are perfect gifts for pets should you be planning ahead for spoilt furry housemates enjoying their first Chanukah lighting.

Remember, Remember the Fifth of November 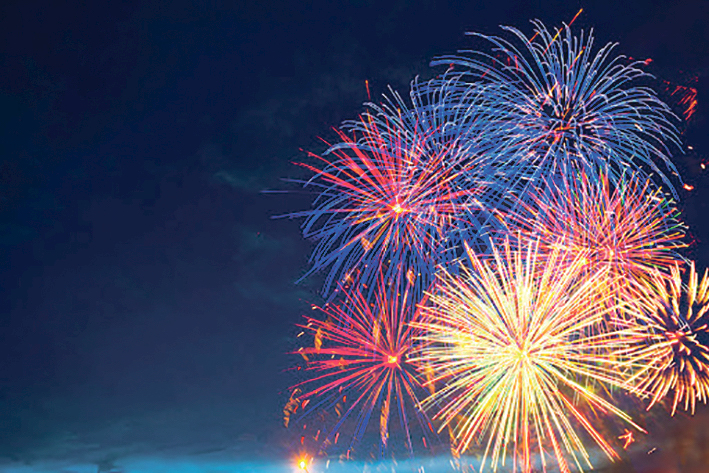 Shabbat may have defused your firework soirée, but others will still be letting off rockets.

“The fifth of November and the days that follow are every dog owner’s worst nightmare,” says Waggington’s behaviour consultant Tracie Elmaleh, who has these tips to help new owners: