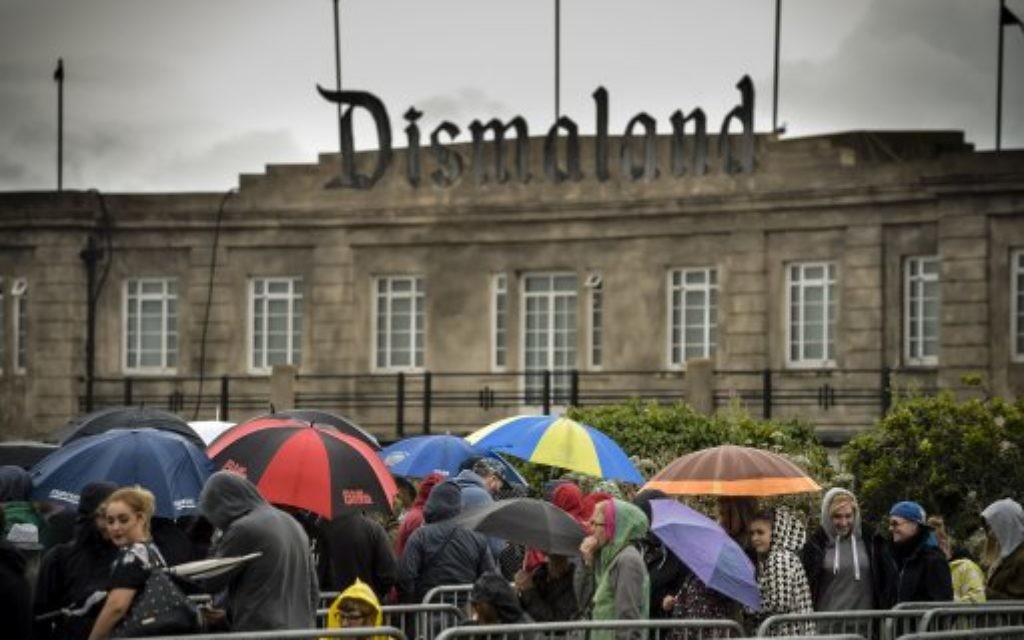 A PALESTINIAN artist has been kicked out of Banksy’s dystopian ‘bemusement’ park after protesting against the presence of Israeli artwork, writes James Graham.

Shadi Alzaqzouq was removed from Dismaland, located in a derelict seaside lido in Weston-super-Mare, and infromed his paintings would be removed, after he covered his work with a sheet with the words, “R.I.P Gaza: Boycott Israel” written in coal. A spokesperson for the exhibit said this action had been taken as his actions were “ugly”.

The Israelis at Banksy’s “anti-Disney theme park” are Amir Schiby, Ronit Baranga and Neta Harari Navon – who feature alongside 56 others. Harari Navon told Jewish News she was thrilled to be asked to take part in the project by the mysterious pop artist. She said: “I never actually met Banksy. None of the artists met him. But in the communication we had about the exhibit, he was gentle and modest and didn’t stop complimenting me.

“He asked me if I’d agree to participate in a secret project and keep it secret. He said my paintings are ‘amazing in his eyes’.” Harari Navon’s Dismaland piece is based on press photographs of the 2006 evacuation of Amona – an Israeli settlement between Jerusalem and Ramallah. She describes her work as “telling a story of disintegration and national crisis” while creating a “new perspective of anger and violence”.

She says Dismaland, which is open to the public for the next four weeks, “breaks all the known boundaries and really challenges the soft underbelly of society.” Baranga, an Israeli clay sculptor, created a Dismaland piece [pictured top right] that attempts to “change the way in which we observe useful tableware”.

She says the addition of mouths and fingers allows for the items to be “perceived as an active object, aware of itself and its surroundings”. Schiby, meanwhile, has contributed a “tribute” photograph to the four Gazan boys killed on a beach while playing football during last year’s Gaza conflict.

Sami Musa is one of three Palestinian artists whose work can be seen in the exhibition. Two of his pieces, part of the ‘Chic-Art Resistance’ collection, offer miniature versions of “Israeli symbols of occupation: barbed wire, walls, rifles, and tear gas”. The website for Dismaland crashed as tickets became available, as fans scrambled to book their £3 tickets.