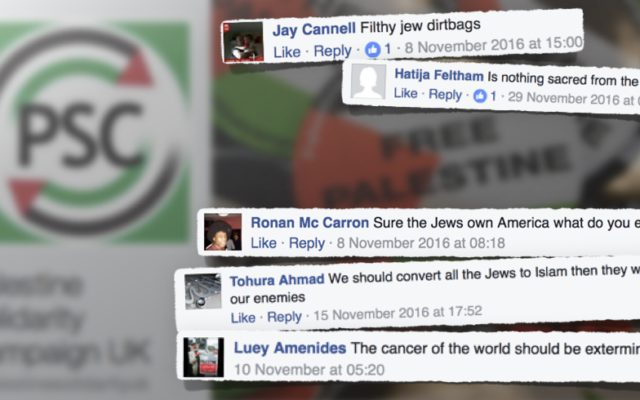 The Campaign Against Antisemitism Online Monitoring Unit reviewed nearly 3,000 comments and categorised them using the International Definition of Antisemitism used by the British government and the College of Policing.

It found that more than seven percent of all comments and replies on posts were anti-Semitic and included anti-Jewish conspiracy myths, Holocaust denial, Holocaust revisionism and general hate speech against Jews.

The Facebook page has 495,000 likes and regularly posts anti-Israel articles and videos.

According to the CAA, hate speech against Jews – which features comments such as “Filthy jew dirtbags” and describes Jews as “the cancer of the world” is more likely to attract likes and supportive comments on the PSC page than condemnation.

The Unit also analysed the response of the Palestine Solidarity Campaign’s (PSC) moderators. It found there was very little counter-speech by PSC supporters.

According to the CAA, hate speech against Jews was more likely to attract likes and supportive comments than condemnation from PSC supporters.

The findings have been published in a new report entitled Bigots for Palestine.

The Campaign Against Antisemitism is now calling on patrons, affiliated trade unions and student unions to disaffiliate from PSC until it agrees to adopt and enforce the International Definition of Antisemitism.

Fifteen of PSC’s affiliated trade unions have published policies against racism, whilst the PSC has publicly claims that it was established “in opposition to racism, including anti-Jewish prejudice.”

Gideon Falter, Chairman of Campaign Against Antisemitism said: “PSC’s Facebook presence is a cesspool of anti-Semitism which proliferates and normalises hatred of Jews.

“We challenge the patrons, trade unions and students’ unions that endorse PSC to act on their commitment to fight racism by ending their association with PSC until it unequivocally endorses and enforces the International Definition of Antisemitism used by the British Government.”