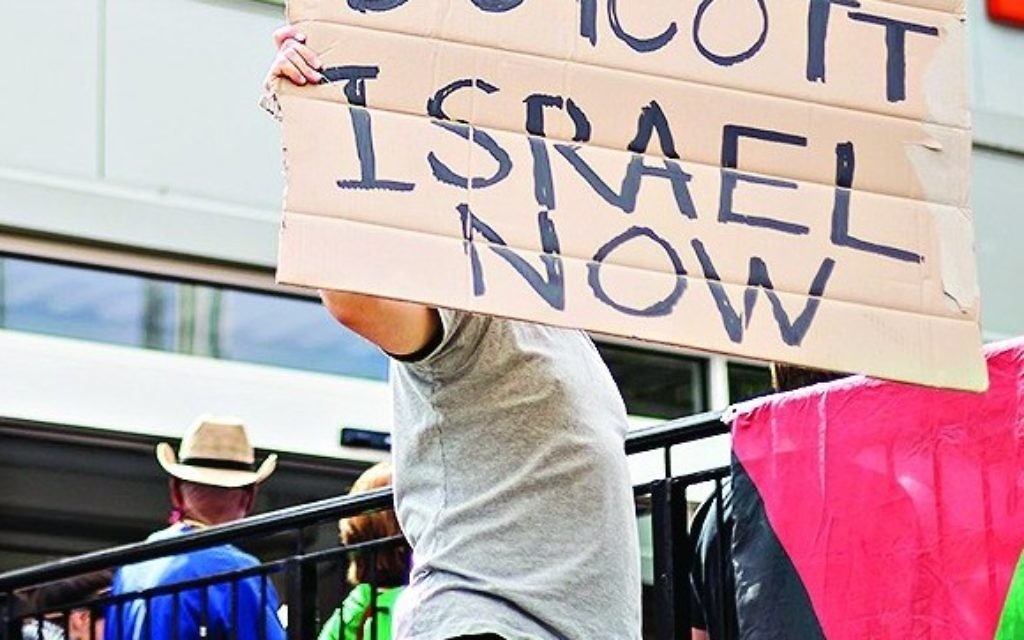 A pledge by hundreds of leading British academics to boycott Israeli universities has been branded bias and “discriminatory”.

The Guardian advert, outlining the commitment by UK scholars to the rights of Palestinians’

In an unprecedented move, 343 have signed a letter in tomorrow’s Guardian, saying they will refuse invitations from Israeli institutions.

The commitment, which will be formally announced in a full-page advert on Tuesday, includes professors and lecturers, Fellows of the Royal Society and Fellows of the British Academy, from 72 different institutions.

It is signed by academics from top universities, including Oxford, Cambridge, London School of Economics and University College London, and accuses Israeli institutions of contributing to its ‘violations of international law and discrimination’. It cites  Technion for its advancing  military technology, as well as Tel Aviv and the Hebrew University in Jerusalem.

The statement says the signatories “are deeply disturbed by Israel’s illegal occupation of Palestinian land” and accuses Israel of “intolerable human rights violations that it inflicts on all sections of the Palestinian people, and its apparent determination to resist any feasible settlement.”

The commitment is in response “to the appeal from Palestinian civil society” for boycotts. It says the academics who signed will not “accept invitations to visit Israeli academic institutions, act as referees in any of their processes, or participate in conferences funded, organised or sponsored by them, or otherwise cooperate with them.”

The letter stresses that the boycott is not against individuals, and they will “continue to work with our Israeli colleagues in their individual capacities.”

Board of Deputies Senior Vice President Richard Verber said: “We would ask why these academics are singling out Israel in such a discriminatory fashion? At a time of immense, often barbaric upheaval in other parts of the Middle East, Israel remains a beacon of academic excellence and progressive thinking..

In the complex conflict between Israel and the Palestinians, boycotting either side will lead to zero progress. Their energy would be much better spent encouraging academic dialogue and relations between like-minded Israelis and Palestinians who believe in a brighter future.”

Simon Johnson, CEO of the Jewish Leadership Council said: “It seems that once again those who wish to improve the situation in the middle-east have a chosen a divisive and discriminatory path rather than creating inclusive academic debate which will benefit society as a whole.

If these academics honestly believe that a boycott of Israeli institutions is a constructive approach, then we are sure that further boycotts against the many other countries who – unlike Israel – are not democratic, oppress dissent and do not abide by the rule of law, are just around the corner. The double standards here are evident and cannot lead to any real progress on the issue.”

British Ambassador to Israel, David Quarrey, said: “The British Government firmly opposes calls to boycott Israel.  We are deeply committed to promoting the UK’s academic and scientific ties with Israel, as part the flourishing partnership between the two countries.  The reality is one of rapidly strengthening trade and tech links between Britain and Israel. As David Cameron has said, the UK Government will never allow those who want to boycott Israel to shut down 60 years worth of vibrant exchange and partnership that does so much to make both our countries stronger.”

Laura Janner-Klausner, senior rabbi of the Movement for Reform Judaism called the boycott “detrimental to peace efforts between Palestinians and Israelis.

Stamping out academic dialogue is a divisive tactic. Discriminatory boycotts such as this cement different sides of the conflict. What the region now desperately needs is a movement of supporters towards peace and a two state solution, where Israelis and Palestinians can live in security, peace and dignity.”

A statement from the Union of Jewish Students “wholeheartedly condemns academic boycotts. Efforts such as this, and the rhetoric of the BDS movement (which this group have affiliated themselves with), aim to simplify a complex conflict where both sides have responsibility to redress injustices.. UJS will continue our work to combat attempts that seek to damage the chances of peace or delegitimise the State of Israel.”

One of the signatories is Professor Ted Honderich of UCL, who donated £5,000 to Labour leader Jeremy Corbyn’s election campaign, said Palestinians have a “moral right” to terrorism.

Conor Gearty, Professor of Human Rights Law at LSE said: “As a State that aspires to live by the values of democracy, the rule of law and respect for human rights, Israel needs urgently to change its behavior so far as its Palestinian citizens and those Palestinians under its control are concerned.”.

Speaking for the organisers of the commitment, Professor Jonathan Rosenhead of LSE claimed that “Israeli universities are at the heart of Israel’s violations of international law and oppression of the Palestinian people.”

Dr. Rachel Cohen of City University said, “it is the responsibility of those of us who have the freedom to act to exercise that freedom in support of our colleagues in Palestinian universities who do not have such freedom.

The Israeli state presents itself as an enlightened funder of academic pursuits, and yet it systematically denies Palestinian academics and students their basic freedoms, such as the freedom of movement necessary to attend international academic conferences, or simply to get to lectures on time.”

Mr Fulvio Martusciello, Member of the European Parliament and Chair of the Delegation for the relation with Israel told Jewish News “the appeal published by the Guardian signed by three hundred British academics, who state they have started a boycott against Israel and its academic institutions it’s wrong and unrealistic. A boycott which has the practical effects of convincing the academic institutions to break the relations with IsraeliUniversities, convincing Israeli academics not to travel to the Jewish state and to not publish articles in Israeli magazines. What is the next step of this committee going to be? To burn Israeli books in Bebelplatz?”

Last week, JK Rowling joined more than 150 leading lights from the world of culture in condemning boycotts of Israeli artists as a barrier to peace.