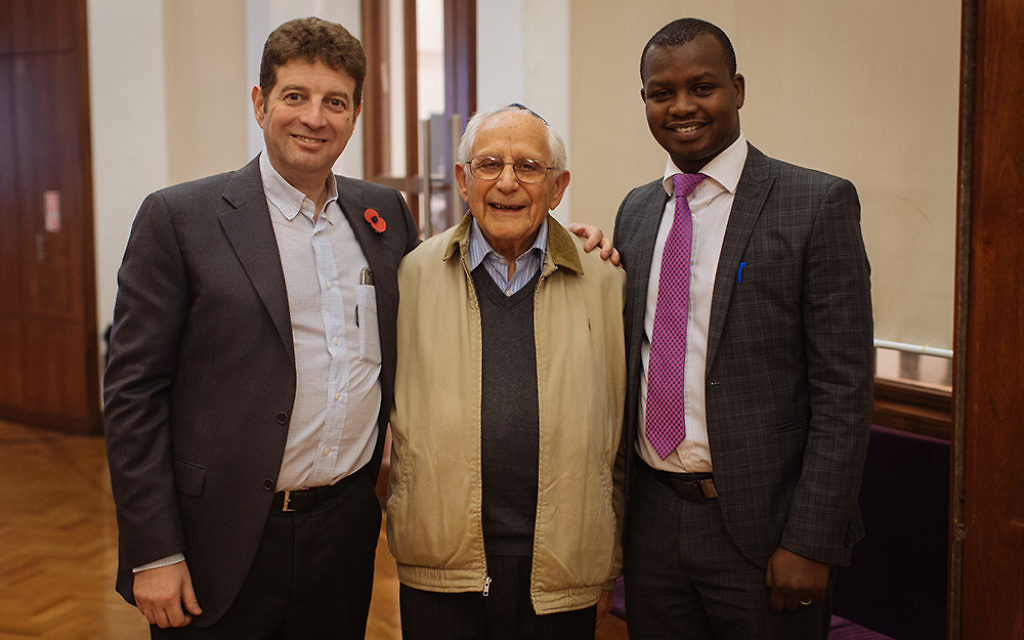 More than 100 people heard a Rwandan genocide survivor speak at the March of the Living’s young professionals launch and fundraiser.

Hosted by St. John’s Wood Synagogue, Shoah survivor Chaim Olmer joined Freddy Mutanguha, who a spoke about his experience during the genocide.

Founder and chair of March of the Living, Scott Saunders, with Freddy with Chaim  (Photo credit: Sam Churchill)

Freddy told guests: “When my friend told me his whole family had been murdered I didn’t believe him, I thought someone had lied to him or they were just hiding… but then they killed everyone in my family.”

He is now the director of the Kigali Genocide Memorial Centre, educating people about the mass killings which occurred in 1994, and saw more than one million of the Tutsi minority murdered by the Hutu majority.

He added: “The reason I enjoy my work is because I feel like my life is dedicated to the story of the genocide and commemorating it. The generation of survivors need to talk about it, because if we don’t no one will.”

He has addressed more than 500 people on a two day tour of the UK, including students at the UK’s largest Jewish school,  JFS, youth movement leaders at JW3, and spoke Kinloss shul in Finchley. He also spent a morning at the Holocaust survivor’s Centre

March of the Living has taken hundreds of young people to Poland since 2010 on educational trips.

Over the last few years, Holocaust survivor Chaim Olmer has also attended to enhance the experience of young people.

Robin Ashleigh, a participant on last year’s March of the Living explained why he went on the trip. He said: “I wanted to become a witness. I went for my own understanding and identity, for my community, and for the survivors and those who perished– to remember.”

March of the Living brought together people from all walks of life, he said, adding: “I met some truly amazing and inspirational people, the pioneers for interfaith, Holocaust remembrance, everything we hold dear for the future.”