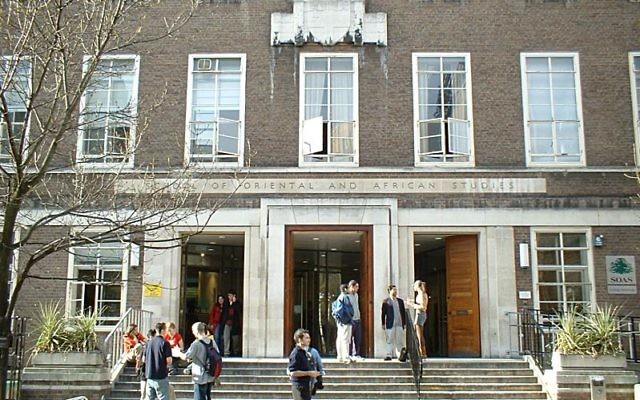 The London School of Oriental and African Studies (SOAS)

Jewish students’ campaign to define what they find “anti-Semitic” hit a brick wall at a Union General Meeting at SOAS University in London this week, with Jewish representatives blasting the “outrageous” comments made.

SOAS Students’ Union, which supports a boycott of Israel, debated the ‘Jewish Equality Act,’ a motion proposed by economics undergraduate Avrahum Sanger, one of less than 40 Jewish students at the university.

His requests were mainly met, such as kosher sandwiches in cafes, easier access to multi-faith prayers rooms and rescheduled activities around Shabbat and Jewish holiday. However the Union took issue exception to his additional request that Jewish students be able to define what is anti-Semitic.

The clause in question read: “Jewish students should be given the right to self-determination and be able to define what constitutes hatred against their group, like all other minority groups.”

In a letter to the Union following the meeting, Sanger thanked his fellow students for the changes agreed, saying: “This will make it easier to be a Jew on campus.” However, he said he was “outraged” at not being able to define anti-Semitism.

A spokeswoman for the Union of Jewish Students (UJS) reacted angrily to the amendment, which was made with the overwhelming support of those present.

The Macpherson principle was adopted from the 1999 report into the Metropolitan Police’s mishandling of Steven Lawrence’s murder. This ensures that an incident should be recorded as “racist” if it is perceived as such by the complainant, but does not dictate that the incident will be found to be racist upon investigation.

Elsewhere, during another debate about the invitation of speakers to campus, one student singled out any “organisation that has any affiliation or any links to a Zionist or Netanyahu or to a Zionist ideology,” adding: “There will not be any tolerance of such organisations to host an event or speak on any topic regardless.”

UJS campaigns manager Josh Nagli said: “The disgraceful comments regarding Zionist speakers will bring back dreadful memories of Jewish students’ experiences on campus in the 1970s when the banning of Zionist speakers led to Jewish Societies being banned.”

He added: “It is completely unacceptable that these comments were not challenged. Instead they were met with applause. It is imperative that SOAS Students’ Union makes it clear that they do not support this view.”