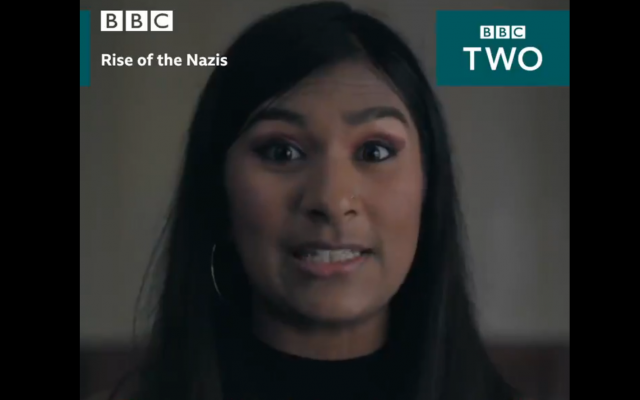 The BBC has defended its new documentary on the rise of Nazism featuring a journalist who previously expressed solidarity with the artist who daubed the Warsaw Ghetto last year.

The three-part series on Germany’s descent into a Nazi dictatorship, titled ‘Rise of the Nazis’, features dramatic reconstructions and archive footage.

Sarkar faced controversy last year for defending the artist who painted pro-Palestine messaging on the wall of the Warsaw Ghetto. “Free Gaza and Palestine. Liberate all ghettos. These words aren’t antisemitic. They’re anti-racist,” she tweeted at the time.

A BBC spokesperson said: “Ash Sarkar is one of a number of current public figures who feature, alongside representatives from military and legal backgrounds.

“She appears in this film in her role as a self-declared communist and lecturer in political theory and her contribution to the series is solely to illuminate the context and perspective of Ernst Thälmann, the leader of the Communist Party of Germany from 1925 to 1933, who died in a concentration camp in 1944.’”

Oberman, who lost family under the Nazi regime, tweeted that she was “deeply disturbed that of all knowledgable experts/historians [sic], you use Ash Sarkar a woman who endorsed the spray painting of the remaining WatsawGhetto wall-an open grave for our families. Why?”

Board of Deputies President Marie van der Zyl echoed concerns, saying: “We would ask the BBC to explain why someone who defended the desecration of a memorial to the Warsaw Ghetto Uprising has been invited to speak on a programme about the rise of the Nazis.

“Given the outrage her comments have caused, the invitation by the programme makers seems both insensitive and provocative.”

Sarkar addressed criticism, tweeting on Tuesday: “I don’t see why my support for Boycotts, Divestment and Sanctions against the Israeli occupation of the West Bank should disqualify me from talking about the Communist Party of Germany, but hey, I guess we live in strange times.
“I obviously reject wholeheartedly claims that of antisemitism. But if that’s something others want to say of me, no matter how upsetting, that’s their right.”
Guardian commentator Owen Jones also defended Sarkar, writing: “She’s one of the left’s brightest figures. That scares the right. The attempt to purge left figures from public life must be fought.”