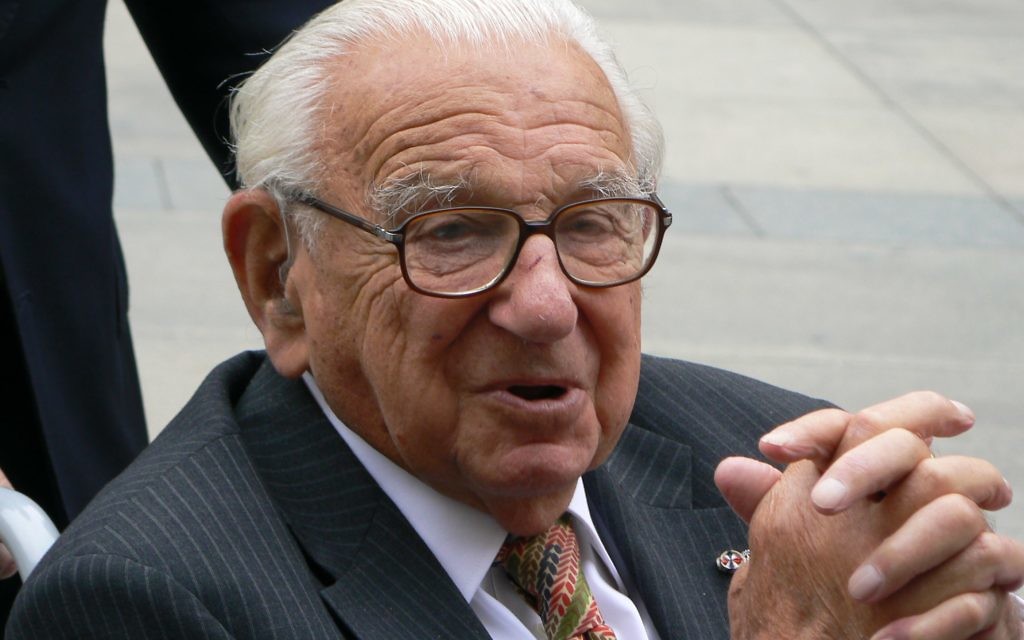 One of the greatest heroes of the Holocaust era was last night remembered as “giant of moral courage” who “saved hundreds of universes” as David Cameron joined those who owe him their lives in paying tribute, after he passed away aged 106.

Sir Nicholas Winton was dubbed Britain’s Schindler for his efforts in organising eight trains to take 669 children from Nazi-occupied Czechoslovakia to safety in London.

The former stockbroker, who was on holiday in Prague when he decided to take action, also helped to find foster families for the youngsters once they arrived in England but did not speak about his astonishing bravery for half a century.

David Cameron led the tributes in a tweet minutes after the announcement of his passing yesterday. “The world has lost a great man,” he said. We must never forget Sir Nicholas Winton’s humanity in saving so many children from the Holocaust.”

He died at Wrexham hospital in Slough on the 76th anniversary of the arrival of the largest Kindertransport – which carried 241 children including Susanne Medas. Saying the timing made the news particularly “poignant”, the 91-year-old – one of the group that came to be known as Nicky’s children – described him as “so special”.

She added: “I was privileged to know him and his mother, whose role is less well-known. We will miss him.” Fellow Kind Dame Stephanie Shirley, who fled Vienna, said: “I admired him tremendously. You must remember, he was just a young man from the City, going skiing and such. He wasn’t a humanitarian, but he found himself in that situation, did this amazing humanitarian act and then kept quiet about it. So, he was a young man about town, whose heart was touched, and he rose to the occasion.”

Born to a German-Jewish family in 1909, Sir Nicholas’ heroic actions were recognised with a knighthood from the Queen in 2002 and a British Hero of the Holocaust medal more eight years later. Just last year, he was presented the Order Of The White Lion, the Czech Republic’s highest honour, by the country’s president Milos Zeman. The ever modest Brit said during the ceremony in Prague: “I thank the British people for making room for them, to accept them, and of course the enormous help given by so many of the Czechs who at that time were doing what they could to fight the Germans and to try and get the children out. In that respect, I was of some help and this is the result.”
It was during an historic episode of That’s Life in 1988 that the full extent of his heroism became apparent to the world. Host Esther Rantzen asked anyone who owes their life to Sir Nicholas to stand up – and gradually, to his astonishment and in one of the most moving television moments of all time, the entire studio audience rose to their feet. She said last night that he was “one of my heroes” who she was “proud to count as a friend”.

She told the Jewish News: “Not only did he save a generation of Czech Jewish children from the Holocaust, but he was a visionary who inspired thousands of today’s young people to believe that one person can really make a difference. He was far too modest himself to recognise that he was a tremendous force for good. I was so glad to be a tiny part of his story.”

On his 105th birthday last year, members of Nicky’s adoring ‘family’ joined his real family in singing happy birthday at a party hosted by the Czech Ambassador Michael Zantovsky. A cake bearing 105 candles hwas also presented. The envoy – who had enjoyed 20 years of friendship with the hero – said: “Nicky Winton was a symbol of the power of good, not just for the children he saved but for the Czech people, all of Europe and the entire world. He was an exemplary man, a wonderful man.”

Tributes also flooded in from Jewish community leaders and organisations, with Chief Rabbi Ephraim Mirvis saying “his loss will be deeply felt across the Jewish world” and his predecessor Lord Sacks hailing him as “one of the heroes of our time”. He added: “Our sages said that saving a life is like saving a universe. Sir Nicholas saved hundreds of universes. He was a giant of moral courage and determination, and he will be mourned by Jewish people around the world.”

World Jewish Relief, which as the Central Fund Fund for German Jewry played a key role in organisation of the Kinderstransport operation from Europe, branded him a “role model for us all” while the Holocaust Educational Trust’s Karen Pollock added: “‘Nicky’s children’, as they have come to be known, and the generations who have followed them, will be eternally grateful for this modest man.”

Expressing deep sadness at the news, Michael Newman, of The Association of Jewish Refugees, said: “Sir Nicholas will be rightly venerated as a true hero whose bravery, altruism and determination saved the lives of some He was notably modest about his remarkable achievements, which will hopefully inspire future generations to intervene when others are in need of help.”

Israeli Ambassador Daniel Taub said: “His legacy, as a point of light in an era of darkness, will forever be remembered.”

Broadcaster Natasha Kaplinsky – who was a member of the Prime Minister’s Holocaust Commission – said: “Our country should be so proud of Sir Nicholas Winton.

“When I met him on his birthday last year I was struck by his incredible modesty. For years he didn’t even talk about the extraordinary things he had done. It is humbling to think about the courage he showed in saving so many lives. It is so important that we remember his story and the stories of those he saved.”