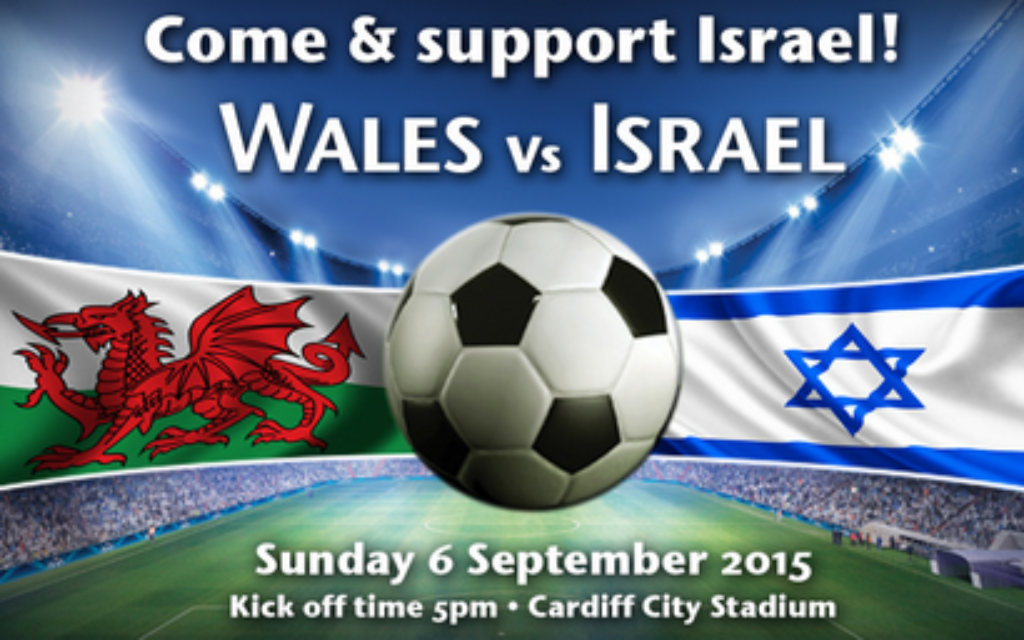 As opening projects go, it can’t get much better than this. On 6th of September the Israeli football team will go head-to-head against Wales in the run-up to the Euro 2016 competition. Wales are in the comfortable position that they’re are all but guaranteed to go through (short of a major upset); Israel are in with a fighting chance of joining  them. The home crowd can leave their nerves at, well, home, while the visitors just have to hold up against a formidable combination of Aaron Ramsey and Gareth Bale. Whatever the final score, it promises to be a gripping match – and as the new Director of the ZF, it’s my pleasure and privilege to help promote it.

But, sadly, this isn’t just a case of selling a kick-about in a fantastic stadium in Cardiff. This gets to the very heart of why the ZF still exists.

If Chaim Weizmann, our first President, was to be teleported into the present day, what would he see? First of all (once he’d got over the initial shock), he would be amazed to see the promise he’d secured in the Balfour Declaration –  the creation of a Jewish homeland – had come true. And what a truth it is. A thriving, world-beating hub of creativity and democracy, home to half the world’s Jews, as well as Muslims, Christians, Druze, Baha’i, and more.

But second of all, he’d be horrified to learn the history of anti-Semitism in the 20th century. How anti-Jewish prejudice had been stoked up to the point of no return, and of how many we lost in the Shoah.  And then, when all of that was starting to sink in, he’d be confronted with the tragic reality that some of that bigotry is clearly still with us today.

Consider Misha Zilberman. One of Israel’s top badminton players, he was scheduled to take part in their World Championships in Indonesia a fortnight ago. Six months after first applying for a visa, he had still been refused access to the country the day before the start. Only international pressure forced Indonesia – a country with a track record of human rights abuses – to finally open their doors to him. Even when he was allowed in, his match had to be re-scheduled for ‘security’ reasons; that is to say, in case his mere presence triggered a riot.

Or Matthew Paul Miller, better known as Matisyahu.  Everyone’s favourite former-Hassidic beatboxer-turned-global-music-sensation thought he was in for some good vibrations this week at the Rototom Sunsplash reggae festival in Spain. However, following “coercion and threats employed by the BDS País Valencià” (https://www.facebook.com/rototomsunsplashofficial/posts/10153366496516743) he was told by the organisers that he had to pledge his allegiance to a Palestinian state, or else be disinvited – an unfortunate act from a country with a history of policing the views of Jews. And so we have an American Jew – not Israeli – the latest victim of this type of harassment and discrimination.  When your reggae festival would probably prefer to host Hamas (strong supporters of a Palestinian state) rather than Damian “son of Bob” Marley (ardent Israel fan) then you know something has gone horribly wrong.

Here in the UK, we’re not free from these efforts either. If our opponents had their way, even Israeli footballers wouldn’t be allowed to enter the country.  The Israeli football team is simultaneously both the most diverse in the Middle East, and, according to the boycotters, deeply racist and representative of apartheid. Obviously. Therefore the best way to make sure that the haters don’t win is to have as many blue and white supporters in the stadium for the match as possible.

But time is running out. The Israeli Football Association are holding onto 2000 reserved tickets, but only until next week. The tickets themselves are only NIS 130 (about £20), and subsidised coaches are available from around the country. (The ZF, for example, are offering cheap seats to anyone travelling from London).

Let’s make this the biggest celebration of Israel in the UK this year. Let’s show the other side that no-one – irrespective of their religious or political views – should ever have to hide their support for the Jewish state. Sport, like culture, should be a perfect opportunity for people to be united (pun intended.) And as an Arsenal man, I’m looking forward to putting aside my rivalries for one night as we stand shoulder to shoulder, wave our flags, and collectively jeer every time Bale or Ramsey get a touch!

To book your place on the coaches to Cardiff leaving from North London visit: www.tiny.cc/coach2cardiff