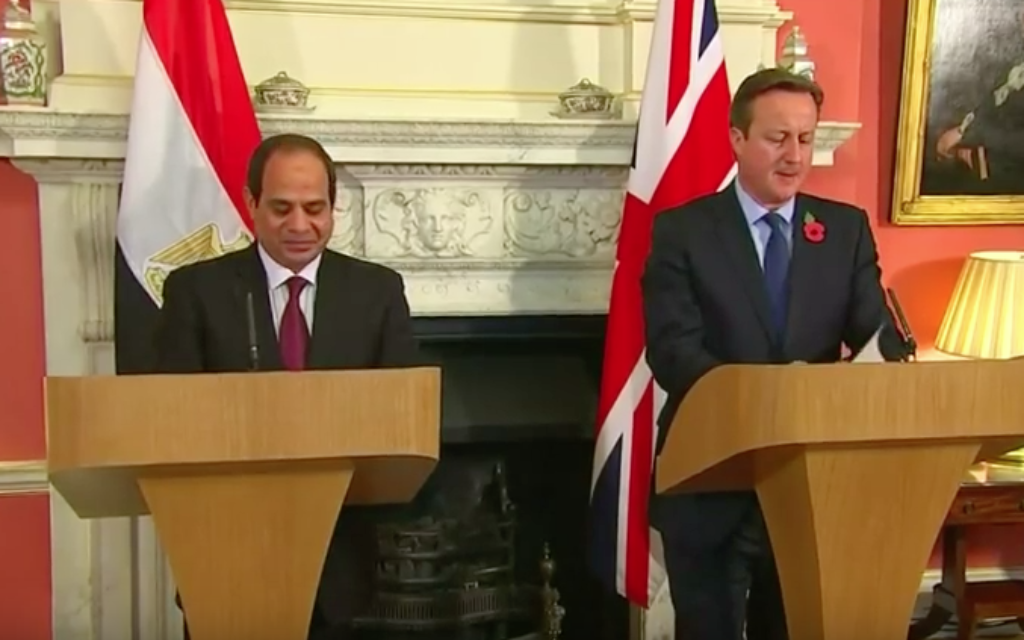 by Alex Brummer, City Editor of the Daily Mail

Britain prides itself on being one of the most open nations to trade in the world. The country’s prosperity depends upon it. With the Eurozone deep in stagnation the need to cultivate a new set of trading partners clearly is paramount.

What is less palatable is the way that David Cameron’s government is going about it. The new ‘Cameron doctrine,’ closely supported by future Tory leadership contender George Osborne, is to embrace trading partners irrespective of their politics. In quick succession the government has reached out to the autocracies of China, Egypt and Kazakhstan  – and Iran is next on the list. Among the recent visitors only India’s Narendra Modi is democratic and even he has great detractors among his country’s minorities.

The most embarrassing of visitors for Cameron has proved to be President Abdel Fattah el-Sisi from Egypt. As far as Israel is concerned the return of military autocracy to Egypt has been regarded as a good thing. President Mohammed Morsi, who represented the radical Muslim Brotherhood, was ousted from office in 2013, and his movement is being violently supressed.

The Gaza border with Egypt is now more tightly controlled and a degree of stability returned to the country. The fragility of all this has been exposed, however, by the terror of Russian flight Metrojet 9268 from Sharm el-Sheikh. At the very moment that the UK was reaching out to Egypt, seeking to rebuild a relationship under strain since the Suez crisis of 60 years ago, it has been undermined by the intelligence services blow against Egyptian tourism. Meanwhile, the Sisi visit also offered non-governmental organisation Human Rights Watch the chance to sound off. It noted that Egyptian security forces have still not accounted for the loss of 1,150 lives during the crackdown which brought the Egyptian strongman to power in 2013.

Whatever the merits of the Sisi government, the chaos of the Egyptian president’s visit, including dinner at 10 Downing Street, illustrates the dangers of unalloyed embrace of autocrats.

China is an important case in point. During the October state visit of President Xi Jinping the red carpet was rolled out, including a state dinner at Buckingham Palace significantly ignored by the Prince of Wales. Deals reportedly worth £40bn (the sums don’t add up!) were said to be signed including transactions that will give China direct access to Britain’s nuclear power technology. Not surprisingly this was a deal too far for Britain’s security agencies who leaked their misgivings during the visit. More recently Britain’s biggest defence contractors have BAE and Rolls-Royce have expressed their worries about a Chinese investment in Sheffield Forgemasters the maker of the specialist casing steels used in nuclear submarines. The fear that valuable technologies will be snaffled by China is very real.

But the craven approach of the Cameron government means that such worries have been swept under the carpet, along with the obvious human rights abuses in the country. Similarly, China’s attacks on UK businesses including pharmaceutical group GlaxoSmithKline and quoted hedge fund Man Group barely have received a mention. All of this despite the view of experienced Sino-watchers that Beijing has little respect for countries that kowtow.

The visit of Kazakhstan leader Nursultan Nazarbayev received less attention but the mineral riches of the country mean that it has become a critical ally despite a long list of human rights abuses. A personal relationship with the Duke of York, Prince Andrew, even meant a short visit to see the Queen. Hospitality of this kind is normally is reserved for democratic Commonwealth leaders such as the New Zealand Prime Minister John Key who took tea with the Queen at Windsor during the final stages of the rugby world cup.

Britain is also unapologetic about reaching out to Iran following the big power nuclear agreement with the country. Foreign Secretary Philip Hammond already had made a visit and the Chancellor George Osborne has trade selling trip in the diary for 2016. What Britain is ignoring is that the power base of President Hassan Rouhani, the British educated leader who led the nuclear opening to the West is eroding. Since the agreement Iran’s Revolutionary Guard directly has stepped up its involvement in the Syrian conflict.

The government in Teheran also has tested a new long-range precision guided missile which potentially violates a United Nations resolution and would be a clear and present danger to Israel and the Sunni Gulf states. Indeed, Iran watchers suspect that there might be a fight back from the supreme leader Ali Khamenei and conservatives when Rouhani’s term comes to an end in 2017. The nuclear deal was negotiated to ease the pressure of economic sanctions, but the commercial dividend which was meant to bring Iran closer to the West may never be delivered.

It would be naïve to think that British foreign policy should only be guided by human rights. Realpolitik demands a sophisticated approach which maximises trade and diplomatic benefits. But bending the knee to unpleasant autocracies is not sensible. Conditions in such countries can turn on a sixpence as Britain discovered during the embarrassing Sisi visit. The ‘Cameron doctrine’ needs a great deal of refinement if it is to bring both trust and economic benefits with it.