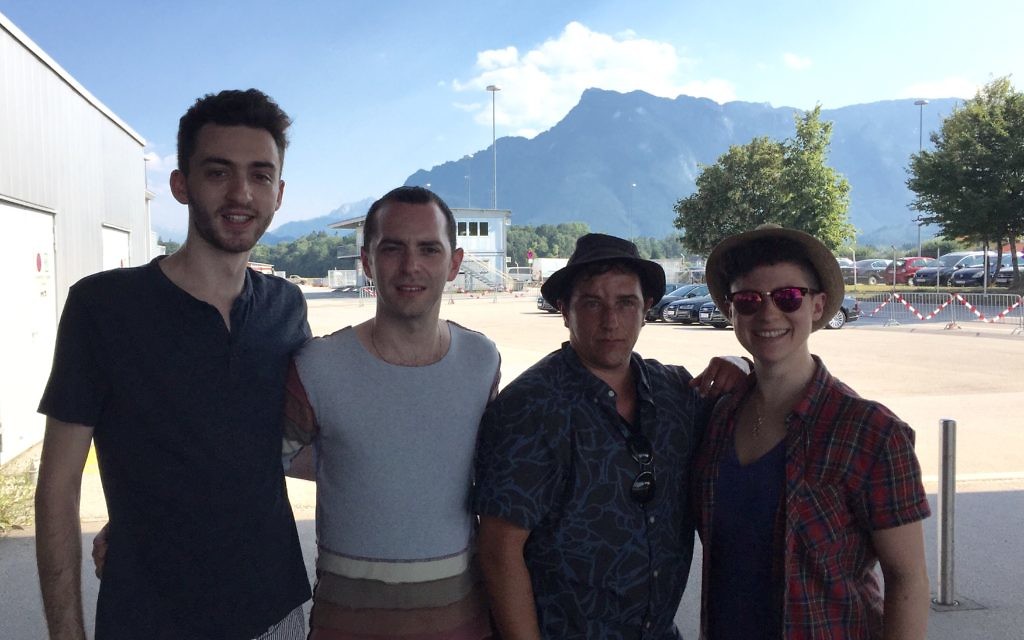 The British co-hort at the Eighteen:22 conference. David Gee, Dave Shaw, Surat-Shaan Knan and Dalia Fleming (from left to right)

The final and third day of the Eighteen:22 event has now come and gone. If you haven’t read the other blogs on this conference – it’s the first ever  international Jewish LGBTQ (Lesbian, Gay, Bisexual, Trans and Queer) think-tank event. There were 60 Jewish LGBTQ and ally leaders from all over the world in the Hotel Schloss Leopoldskron in Salzburg – where they filmed the Sound of Music.

I am 26 and a queer Jewish activist and Education Co-ordinator for Keshet UK – the forum working to champion the inclusion of lesbian, gay, bisexual, transgender, queer, intersex and questioning people in all areas of Jewish life in the United Kingdom.

When I was 18, I knew two other British Jewish LGBTQ people and I was offered the opportunity to go to New York to learn from American LGBTQ Jews and bring back that experience to support and build our community at home. At the time I was not open to everyone about my sexuality and had to turn down the trip for fear of people finding out. Eight years later – I am open about my sexuality and comfortable with Jewish identity and faith. My aim is to create space for LGBTQ Jews to feel as welcomed as I do in our community.

The third day of the conference was about us thinking big and what our goals are over the coming year. We did a ‘speed dating’ type event to swap ideas for project and I heard ideas ranging from an Argentinian working to give LGBT people more space in their society to a journalist who is writing in order to shine a light across the US on LGBTQ issues.

We then had a break out session and I chose to go to a session about orthodox advocacy. This is a topic that really interests me as I often feel I don’t have the words to say. If you were wondering what the title of this piece is about – it is my favourite quote from this session. Someone was making the point that there are lots of statements in halacha that are morally questionable now a days – but never the less – that is the halacha. For example, because you shouldn’t separate the good from the bad on Shabbat – technically if you take the onions out from the salad on Shabbat – you should die.

Often we focus on the halacha in a way that is not productive. There are many different ways to discuss LGBTQ issues within the orthodox community but one thing I took from this session was that all sections of Judaism can rally around the idea of Pikuach Nefesh; the idea of saving a life. Once you can talk about that, and work on strategies to reduce harm to people in the orthodox population – you can begin to have a productive conversation away from the halacha and towards the reality of the people in these communities.

The next session we chose, I went to one about how we frame the holocaust and in some settings that can create collective trauma. The Jewish fear of seeming other and wanting to assimilate into where they are living now and where they are from creates fear of LGBTQ people. This was set in quite a North American context and I hadn’t ever thought about it in this way. The way we frame the holocaust creating using the ‘never again’ narrative has created pockets of the community who are afraid of Jews or Judaism that seems like ‘the other’. Consequently, rather than welcoming and rallying for those who are different, as we were discriminated against for being different too, we can alienate and push them away.

The final activity was to help us plan for the next year. I realised that I have a few goals for Keshet UK – to engage and work with more Jewish schools and for us to get a full time staff member. Being entirely volunteer led means we all put 100% in but sometimes our 100% doesn’t satisfy the requests we get. This is a wonderful problem to have but one that has to be resolved. The fact that so many different areas of the British Jewish community are thinking about how they can make their communities more inclusive, more welcoming, more tolerant – it is a good problem for Keshet UK to be in demand. I say this needing to highlight that there are people who attended Eighteen:22 who are not out in their countries, to their families or communities and there are people who are out and risk their safety in order to live as they are.

The Jewish LGBTQ movement is growing – across continents and across denominations. Being part of that movement and helping it become stronger – is an honour. I feel enriched knowing the other participants and determined to work with anyone who want to make the British community, an inclusive community.