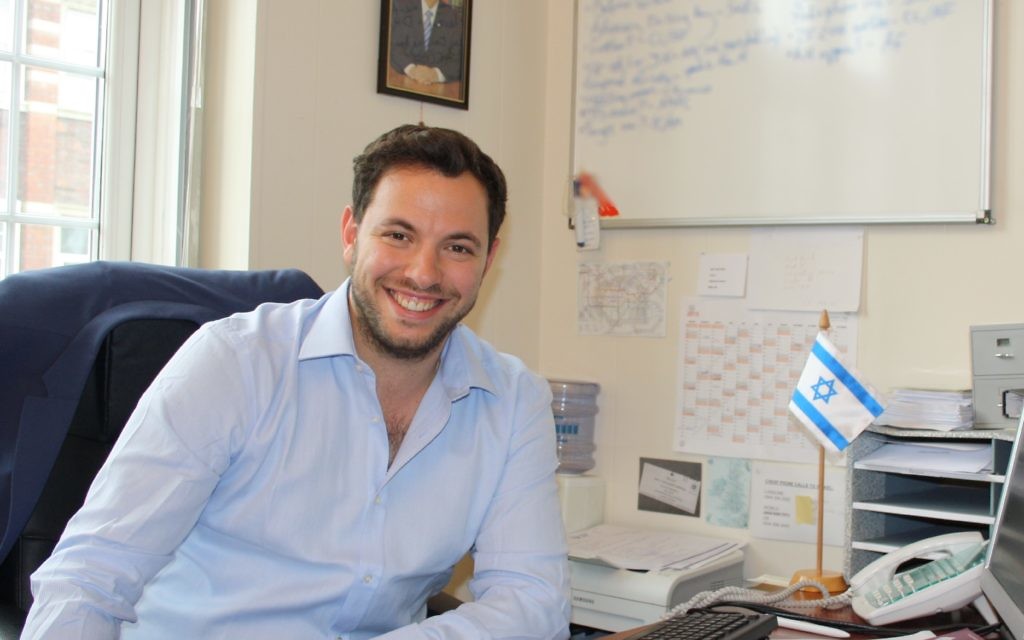 Middle of August, I thought to myself; that seems like a sensible time of year to start a new job. School’s out, everyone’s on holiday.

The perfect opportunity to ease in, learn the ropes, and get the blue-and-white flag angled juuuust right on my new desk.

Slow start? Not a bit of it. Less than a month into my new role as director of the ZF, we’ve had to deal with visits from both the Israeli football team and the Israeli prime minister.

So within weeks of starting, we were supporting Israel both on the pitch and on the streets.

We brought more than 100 people with us to Cardiff to cheer on the boys in blue as they shocked their hosts with a park-the-bus style nil-nil draw.

Alongside that, our solidarity rally celebrated the most diverse team and country in the Middle East.

Only a few days later, we were back out on the streets again. This time, things were a lot less pleasant.

The imminent arrival of Prime Minister Benjamin Netanyahu brought out a braying mob in full force outside Downing Street, hundreds of anti-Israel demonstrators raging against the possible presence of a democratically-elected head of government while huddling up to Hezbollah and Hamas flags.

There we were – hundreds of ordinary people, supporting Israel, standing shoulder-to-shoulder against the hate.

Those are the twin goals of the ZF right there – celebrating Israel, and challenging her enemies. The three words that encapsulate my vision for the future of the ZF are: inclusive, modern and unapologetic.

Inclusive, because we can’t make that case alone. The Jewish community is too small to fight itself. That means we have to find a space for everyone, whether left or right, religious or secular.

Everyone has a part to play. But the Jewish community is also too small to fight by itself.

This can’t just be a Jewish cause.

It shouldn’t just be Jews who care when fascist flags are brazenly displayed outside the residence of our Prime Minister.

Shouldn’t just be Jews who worry when anti-Semitism gets a free pass out of all the prejudices.

We’ve built ties with Christians – why not Hindus? Atheists? Muslims?

Modern, because we have to keep finding new, better and smarter ways to engage with both supporters and the general public. We need to network, to find the right messages that work for different audiences, and to fully capitalise on the potential of social media.

This needs to be part and parcel of engaging with the younger side of our community. It cannot simply be left to the handful of under 40s who are currently involved in the community.

We need to do more work to engage and inspire younger people to actually want to be part of this community we are so proud of.

And unapologetic. It’s time for Israel supporters to stop hiding. Israel is a liberal democracy in a region ping-ponging between Soviet-style dictatorship and Dark Ages-inspired theocracies.

Yes, there are many things you can criticise, but we can’t lose sight of the fact that our enemies aren’t out to fix a policy here or redraw a border there.

They oppose the Jewish right to self-determination altogether – and we have to stand strong against them, because no one else will.

The ZF has a huge amount of history. This week, Netanyahu took the time to see the original copy of the Balfour Declaration, the document that binds our two great countries together.

As the original recipients and the only named organisation in the letter, the ZF feels a particular sense of pride in our place in Zionist history.

We helped bring about the re-establishment of the Israel, which has already proved in so many ways to be a light unto the nations.

Our goal is to keep magnifying that light, so that as many people as possible are aware of it – and to keep fighting those who would snuff it out.