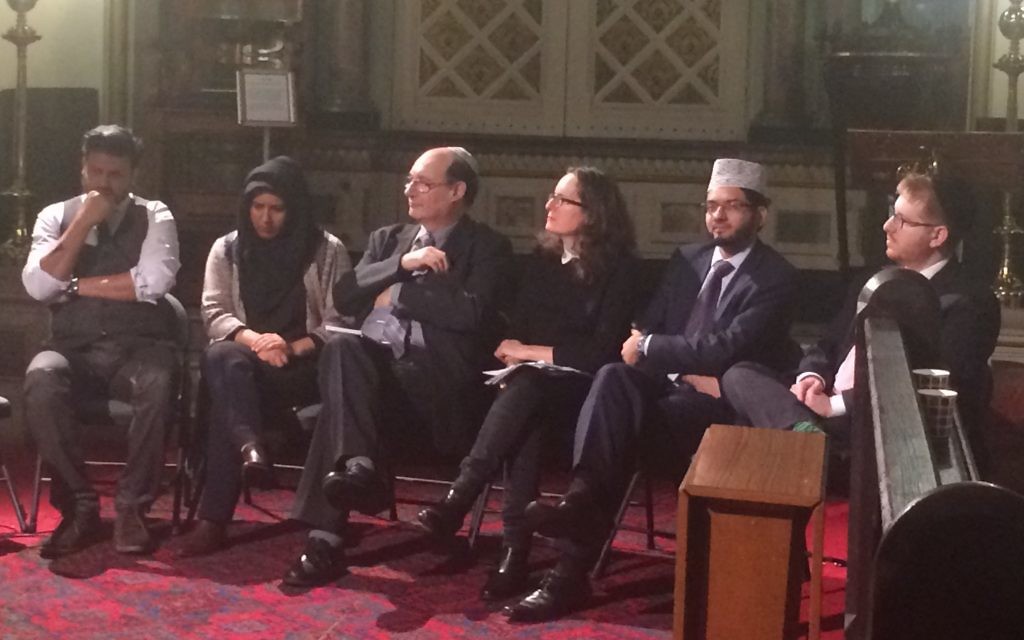 by Elizabeth Harris-Sawczenko, Council of Christians and Jews, Deputy Director

So why was it that on a cold, rainy Thursday evening, over one hundred Muslims, Christians and Jews, crowded out the historic Jewish Museum in Manchester to attend a seminar, on ‘Challenging anti-Semitism and Islamaphobia’. The answer was obvious to all those attending – communities are hurting. They are in pain and they are angry, and they need a place to address this now. The seminar hosted by the Abrahamic Forum of the International Council of Christians and Jews, provided a much needed outlet.

We can’t avoid discussing these two evils anymore, and it is ever more powerful when we are able to discuss them together, to hear one another and to examine our innermost selves – are we part of the solution or are we part of the problem? Following the second Paris terror attack we have witnessed countless attacks on Muslims: Islamophobic hate crimes in London rose by 70 percent this year and tripled in the two weeks following the Paris terror attacks from 24 to 76, and that’s only the ones reported. Similarly, numerous posts on social media, blame Jews and Zionists for somehow being part of a conspiracy behind the attacks. These are the more extreme expressions, but casual anti-Semitic and Islamaphobic discourse muddy our daily discourse without us even blinking an eyelid, so we have to be vigilant and call it out, every single time it appears. It’s a Herculean task.

But there’s something else happening. There is a growing counter culture, of those who refuse to tolerate this anymore, and some of these individuals and organisations came together in Manchester to say to one another, we hear you, we need to do something together now to stop this hatred. The evening comprised two parts – the first examined the academic roots of both prejudices, with Christian, Muslim and Jewish academics. The second half of the evening was devoted to Muslim, Jewish and Christian, practitioners in the field, who talked about their work and experiences and provided fantastic role models, to prove that there is another way.  That we cant give in to despair or worse still become apathetic and indifferent. There wasn’t a dry eye in the audience when Rabbi Benjy Rickman described the incredible success of the first Islamic-Jewish school twinning project. In his words ‘When we learn to listen and are brave enough to reach outside our own community we can make a world worth living in’, and this was followed by a powerful and passionate presentation by Imam Qari Asim: “We must join hands and heads to eliminate prejudice, bigotry and intolerance from our society – whether it be anti-Semitism, anti-Muslim hatred or hatred towards other minority communities.”

During a break for refreshments, surprisingly, there was a palpable sense of joy, following such serious and intense debate. Now that the unspoken fear of both communities had been released, and presenters and participants had taken the opportunity to speak openly and frankly, there was a sincere readiness to engage. New connections were made, invitations received and accepted, and even in those few hours a community of Jews, Christians and Muslims began to come together against prejudice.

We can agree to hold different opinions, but we cant afford to be divided in what is the most challenging period of modern history since WW2. Most of all we need to be brave and swim against the tide of xenophobia that could engulf us if we don’t fight back. In the words of Bishop Michael Iprave, CCJ Chairman: ‘anti-Semitism and Islamophobia are problems for us all, as is the persecution of Christians across the world. We can only tackle these challenges by standing together in mutual trust, respect and partnership.’