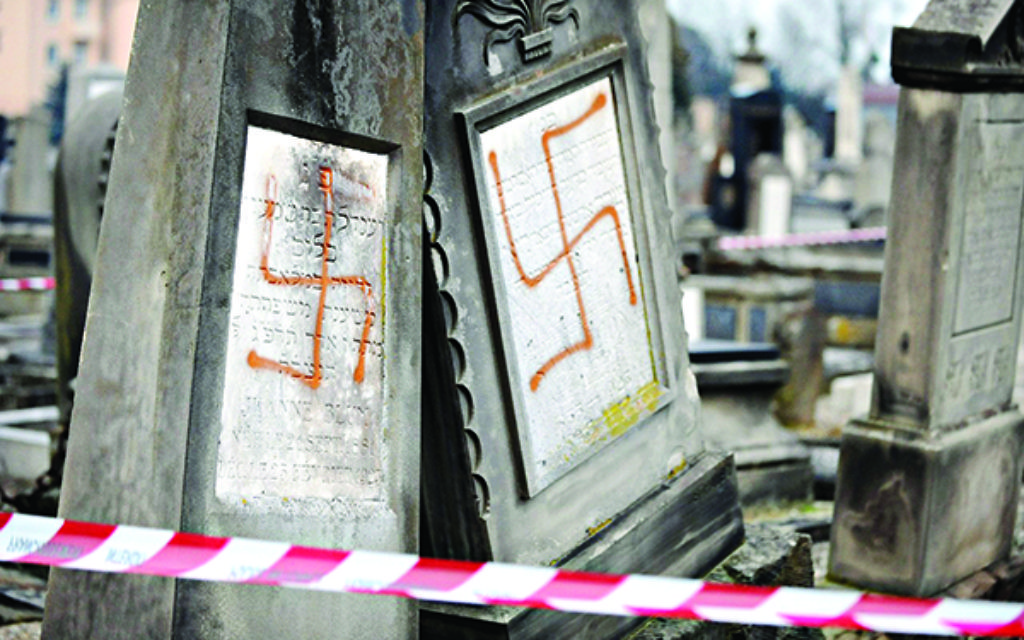 Anti-Semitic attack on a grave

In recent years we have witnessed an alarming increase in anti-Jewish abuse in Britain, and across Europe generally. The Community Security Trust (CST) reports a doubling of reported anti-Semitic incidents in the UK from 513 in 2013 to 1168 in 2014. This figure is the highest ever registered, surpassing the previous record of 931 incidents in 2009. Given the comparatively small size of the Jewish community in the UK (250,000-300,000 people) relative to the total population of the country (64 million), this surge over the past two years constitutes a significant escalation of racist abuse against Jews. About 50% of all religion-based hate crimes in England and Wales during 2014 were perpetrated against Jews, even though Jews make up only 0.4% of the British population.

The situation is worse in other parts of Europe, where deadly Islamist terror attacks on Jewish institutions have claimed victims over the past three years in Toulouse, Brussels, Paris, and Copenhagen. These attacks are directly fostered by relentless campaigns of group defamation that portray Jews in demonic terms. Islamist extremists promote violence against Jews as an integral part of their political programs. With increasing frequency and prominence we hear genocidal Nazi slogans chanted at demonstrations protesting Israeli military actions. In Hungary, Greece, France, and the Baltic countries, political parties of the far right promote fascist anti-Jewish views. Such parties have become electorally significant in their respective countries. These developments cannot be simply attributed to the aberrant conduct of a few extremists.

To be sure, we are not re-living the 1930s. Jews in Europe do not face systematic, government-sponsored exclusion and repression. They remain fully enfranchised citizens of the countries in which they are living. However, they are experiencing a wave of popular anti-Jewish bigotry throughout Europe that is unparalleled at any previous time in the post-War era. This bigotry has emerged from several distinct demographic and political sources. It is necessary to confront the facts with sobriety and honesty, avoiding both exaggeration and denial.

Someone unaware of the gravity of the situation might suggest that, while unfortunate and unacceptable, anti-Semitism in contemporary Europe is not a serious threat to Jews. Aside from seasonal outbursts, coinciding with flare-ups in the Israeli-Palestinian conflict, it does not significantly interfere with the lives of Jewish residents of European countries. Jews remain highly successful and well integrated into their host societies.

This attitude is profoundly complacent. Generations of children have been attending Jewish schools under armed guard, and Jews are required to enter Synagogues, as well as other communal institutions, under siege-like security arrangements. It is unconscionable that the members of any ethnic, cultural, or religious group are forced to contend with this type of threat to their collective and personal safety.

Over the long term, this state of affairs seriously distorts Jewish public life in Europe. With the sharp rise of violence, the cost of participation in Jewish institutions and of personal Jewish visibility is becoming prohibitive. Jews in Europe are now having to hide their identities, or else face a significant risk of violent hostility as the price of robust Jewish life in the public domain. Some are opting to leave Europe for more hospitable environments in Israel or North America.

That these wholly unpalatable choices are being inflicted on any ethnic or religious minority in a modern liberal democracy is something that should deeply embarrass the whole population of that society. Racism, religious intolerance, and gender-based persecution of any kind are a lethal threat to liberal-democratic values. But in sharp contrast to laudable public concern over other forms of bigotry, we observe widespread insouciance and relative indifference toward anti-Semitism in Britain ─ and in Europe more generally ─ particularly among those who purport to be politically progressive. Hostility to Jews, while marked as unpleasant, is often regarded as the normal “business overhead” exacted for unequivocal Jewish identification.

Responding to this situation, “In These Times” is a statement drafted by five British academics and an American colleague in July 2015. We have published it in order to share our concerns with all people committed to liberal values and human rights. We invite everyone to sign the statement and to promote it.

The full statement, with a link to sign it, can be viewed here: http://fathomjournal.org/in-these-times-a-statement-on-contemporary-european-anti-semitism/