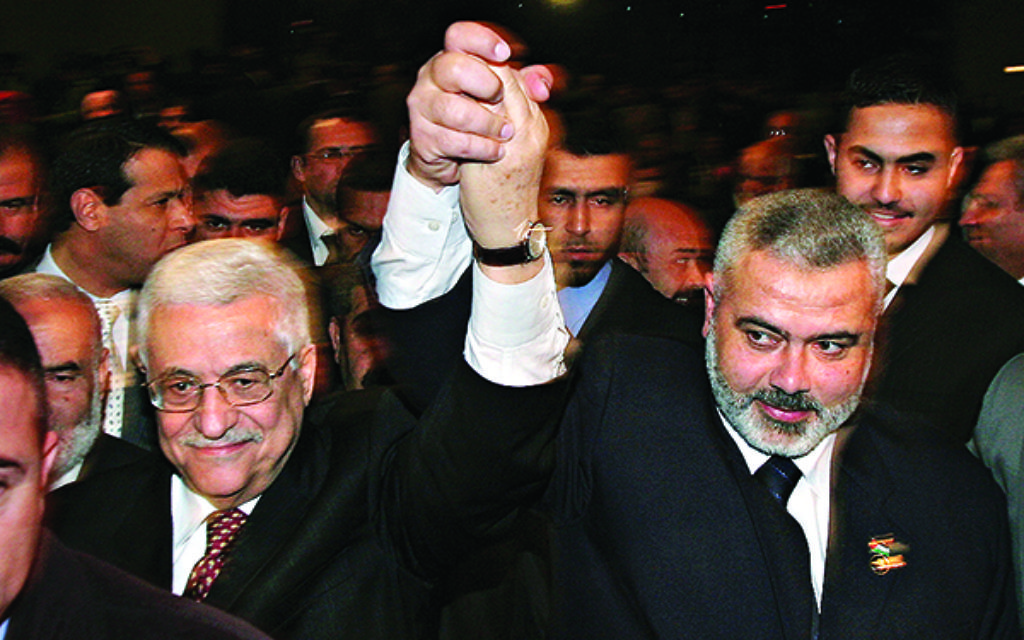 Mahmoud Abbas and Haniyeh reached an agreement between their parties, ending a four-year-old rift.

Yes, I’m sure you are looking at the title of this article, and then the writer’s name, and then back at the title and scratching your head : Has he gone mad ?! Maybe the stress of Middle East living has finally gotten to him? Maybe a little too much Kiddush wine?

No, I haven’t gone off the deep end – yet. You see, I was always taught to give credit where credit is due. And I am compelled, by sheer force of honesty, to pay tribute to Palestinian leaders of all hues and their followers.

Here is a group of people – and I use the word loosely – who have managed to hijack, hoodwink, and hold hostage an entire world.

They commit the most brutal and savage attacks upon innocents – both ours AND theirs – and the world watches in sublime silence.

They riot, they burn and rape, they gleefully stab young children, even in their cribs or on their bicycles, and they get a free pass from the media and the masses.

Even more than a free pass; they have actually become the darlings of the avant-garde, the campus crowd, the so-called intellegentsia.

And this is no small accomplishment.

All Palestinian leaders and their followers have been wreaking havoc for decades. These are the hoodlums that subjected the world to innumerable airplane hijackings, that popularized that great sport of suicide bombings, and ‘vehicular’ homicides, and dropping opponents off tall buildings.

If you are reading this while waiting in an interminably-long security line at an airport, or pouring out the contents of your purse at a museum or a mall, you have these Palestinians – or their Muslim copy-cats – to thank for the inconvenience of security checks.

But do they roundly receive ‘credit’ or condemnation for their acts of terror? Certainly not ! On the contrary, they generate only sympathy and mass rallies in their support, along with gobs of money being thrown at them from every direction.

Ah, yes, the money. The Palestinians have collected hundreds of billions of dollars – maybe even a trillion by now – from rich, gullible do-gooders all over the world.

The EU bankrolls them, the U.N. uses a healthy chunk of its annual budget on them, the United States sends them half a billion per year, and well-meaning individuals from every Western country send along their pennies and pounds through a variety of charity fronts they run.

And what do the ‘poor Palestinians’ do with all this cash? Well, let’s start with what they don’t do: They don’t build institutions of higher learning; they don’t build hospitals or train doctors ; they don’t improve their people’s quality of life through the arts or education.

Instead – after stealing the lion’s share of the funds and sending it along to their Swiss accounts – the Palestinian leaders buy weapons. And more weapons. Because they are eternally preparing for a war of destruction that they pray will come; a war that will wipe out the infidels – Zionists, Jews, Americans, any non-believer in the Koran, for that matter – and create one gigantic, global Islamic dictatorship.

Monthly stipends to anyone who commits an act of violence. The worse the crime, the more money paid. The greater the death toll, the greater the glory – and the payoff.

Yasser Arafat, the arch-terrorist who continues to ‘inspire’ his people, had an assistant who carried an attache case filled with millions of dollars and accompanied him everywhere he went. Arafat would regularly dispense the money to both rivals and fellow terrorists, keeping the murder mill grinding along. (When Arafat mercifully died, the assistant – and the briefcase – disappeared, and are still being sought by the current kleptocrats).

Through all this, and so much more, the world continues to raise the Palestinian banner, ignoring all the thousands of victims of Palestinian terror and focusing exclusively on Palestinian ‘suffering.’ So, like it or not, you gotta hand it to them for pulling a fast one on an entire planet.

How do they do it, you ask? How do they commit the grossest, most inmoral actions, and get away with it scot-free?

Well, to begin with there are a lot of haters out there, sad to say. People who automatically condemn  and castigate Israel and the Jews for every ill of the Middle East, no matter the cause or the context. And lots of folks – including millions of Europeans, not to mention third-world countries –who hate America and see Israel as America’s cuddled client. And then there are those who myopically view Israel as the Goliath, and the Palestinians as David the underdog, even though there are 22 Arabs states overflowing with oil money, arms and political clout.

But that’s not the whole story, of course. Not everyone out there is a confirmed anti-Semite. A whole lot of the people lining up on the wrong side of morality and justice are just plain clueless.

Kids who couldn’t find ‘Palestine’ on a map to save their scholarship join with Muslims on campus to march against Israel. Folks in Ireland or Indiana, who never met a Palestinian and can’t spell ‘Isreal’ correctly, who think the Jewish state just came on the scene a couple years ago, raise money for flotillas to a ‘beleagured’ Gaza in their pub or parish.

Most people today, truth be told, don’t read past the headlines – most of which are skewed – and follow and swollow whole the media bias that pollutes the news.

On a recent trip to Vienna, I encountered some of these people at a BDS booth, purposely put outside the Holocaust memorial.

They were chanting the mindless mantra, ‘the occupation,’ as reason for their plea to boycott Israel. “And what,” I asked them, “were the Palestinians attempting to ‘liberate’ in 1964 when they founded the Palestine ‘Liberation’ Organization? The territories that were then under Jordanian occupation ?!” Needless to say, they hadn’t a clue as to what I was saying.

So for now, I guess we have to bite our lips and give the devil his due – literally. But it’s not going to stay that way forever, and it’s certainly not going to stop us. We are going to battle the Palestinian menace, and we are going to emerge victorious and continue to move forward. We have faced down enemies a whole lot more dangerous than these guys before in our history, and we know how to survive. The Greeks, the Romans, the Nazis, the Communists, they all had us in their sights. But now they are gone, and we are still here – stronger than ever.

Rabbi Stewart Weiss is director of the Jewish Outreach Center of Ra’anana. His son, IDF Sgt. Ari Weiss, fell in battle against Hamas terrorists in Shechem/Nablus in 2002. This article was originally posted on Jpost.