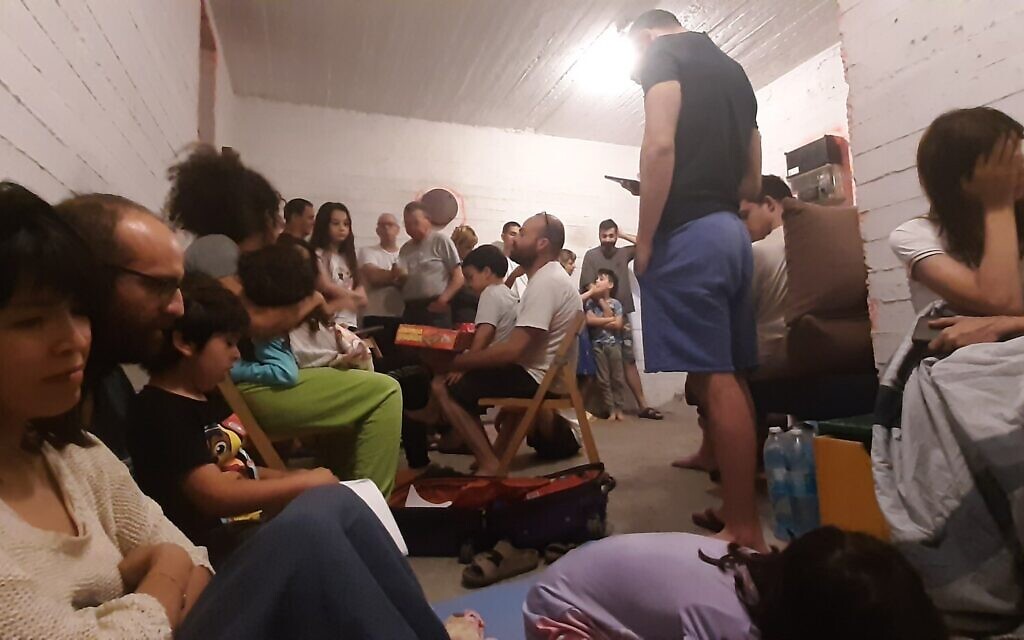 Inside the bomb shelter

It’s a strange feeling knowing some one is trying to kill you.

But last night, huddled in my apartment block’s bomb shelter at 3am, as Hamas unleashed a titanic barrage of rockets at the greater Tel Aviv area in an attempt to overwhelm our Iron Dome defense system—that’s exactly what was happening.

First off—I’m safe, and I’m fine. In Tel Aviv, we have 90 seconds to reach shelter when the bone-chilling Red Alert siren goes off. That’s an eternity, in Israeli terms. Israelis living closer to the Gaza Strip have mere seconds to wake up, grab their kids, and run into a bomb shelter—if they have one.

But still, you find yourself doing the sort of survival planning you never banked on.

Install the Home Front Command app, keep your phone on full volume. Sleep in a t-shirt and shorts, despite the warm weather. Keep the bedroom door open, light on in the corridor, and keys and a water bottle next to the door. So when the siren wails at 3am, you’re downstairs in 20 seconds flat.

Then when you go out in the morning to run an errand, you have to think—if the siren catches me outside, where do I hide? That’s an underground car park on my left, that’s good. Maybe I can run into a nearby building, that’s something. Or maybe just lie on the floor this time, hands protecting my head, keeping a safe distance from any cars that might explode from a rocket strike.

Sitting in the communal bomb shelter, a room of reinforced concrete, with all my neighbors, the walls rumble gently with every Iron Dome interception in the sky, and a dull thud. There’s poor reception, but the videos streaming in show what looks like a Star Wars-type battle above our heads.

Ten minutes after the siren, it’s safe to go back home. But a few minutes later, another siren, and we’re back. News comes in: a direct rocket strike on an apartment block a mere kilometre away. Mercifully, nobody is killed.

My grandmother, who lives nearby, doesn’t have a rocket shelter. If the siren catches her at home, all she can do is cling to the mezuzah in the stairway and pray.

The hardest thing has been seeing far-left groups in the Diaspora, like Na’amod in Britain, protesting on behalf of the Palestinians while we’re literally cowering for our lives, and our young men and women are risking their lives to eliminate this terrorist threat.

If you, our friends and family in the Diaspora, don’t have our backs—who will?